Some weeks are both long and short. This was one of those for me. Thank goodness it’s Friday. But I can’t believe it’s already time for quick takes! 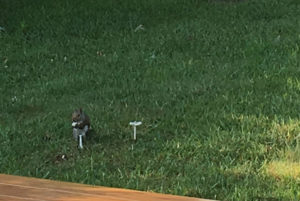 Did you know that squirrels eat mushrooms? I was surprised to see one eating a mushroom in our yard the other day.

I wasn’t surprised that there was a mushroom in the yard since it has been really wet, but I didn’t realize squirrels were mushroom fans.

Maybe some of them prefer pepperoni or anchovies.

Do I give the impression of being extremely organized? Then you might be surprised to learn that I just realized I had booked our sitter for a week I had also signed the boys up for a week of camp. And the only way I figured this out is that our 9-year-old told me I had made a mistake.

It’s good that someone is paying attention. Maybe next year I’ll let him plan all the summer day care arrangements. 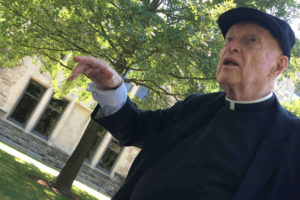 Monday was the Feast of St. Ignatius, and I managed to attend Mass on our campus in the chapel. The three Jesuits on the altar had served a total of 151 years (and counting) in the Jesuits. One of them, Fr. Frank Haig, S.J., was celebrating 71 years in the Jesuits that day.

Jesuits have been part of my life for as long as I can remember since my Uncle Miles Fay was a Jesuit priest. One of his Jesuit friends baptized me in Loyola’s chapel, where I went to Mass on Monday, and I received my First Communion on Loyola’s campus too, in the little chapel that used to be in what was then the Jesuit residence. And now I work for Loyola. I just love how God brings the puzzle pieces of our lives together. 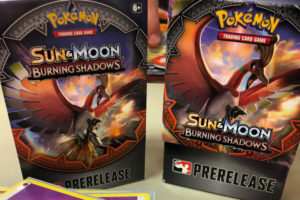 Last weekend I took our boys to a Pokemon prerelease tournament. It was fascinating. Just when I think I am getting a handle on this whole Pokemon card thing, I realize I have so much to learn. The tournament was a chance for our children to get some of the brand-new Pokemon cards before they were released.

They opened the boxes of brand-new cards, and then they each had to build a Pokemon deck to compete in a Pokemon tournament—three rounds competing against children their ages.

I thought our younger son especially might run out of steam and interest, but he was fine. He stayed engaged and focused the whole time. Instead, of course, it was his mother who was struggling to stay as excited and interested hours into the tournament.

It was fun, though, and I would bet my whole Pokemon card collection we’ll be going again. So next time I think I’ll bring a book. 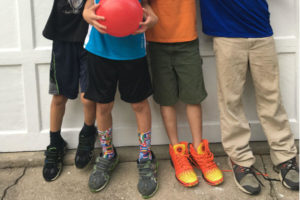 How fast should children wear out shoes? Are there some that wear better than others? I have decided the ones we buy for $50 a pair don’t last any longer than the ones that cost $12 a pair.

So I’m thinking of buying them each two cheap pairs and having them alternate until they fall apart.

But, of course, I’m too cheap to buy them two pairs at a time, so we’ll just keep running back to the store for replacement pairs.

When I took one of the boys to the dentist this week, the hygienist lectured him—and me—on dental care. We listened to all the complaints. He needs to brush harder and longer. He needs to floss after every snack. He should probably get some expensive water pick—and then rinse with a special rinse afterward. Or maybe I have that in reverse.

Anyway, I sat there wondering why the hygienist think this lecture would motivate us to do better. I find lectures like that do the opposite for me, and I walk out feeling stubborn, annoyed, and almost determined to fail.

But I have to say, her lecture made a real difference for our son. He hasn’t been flossing after every snack—but he also doesn’t fly to the Moon every night in a space shuttle he built by hand. But he has become much more concerned with his teeth and his brushing, and he took what she said very seriously.

So it occurs to me that maybe this is a personality difference, and maybe this is why I spent all those years switching dentists because meddlesome, lecturing hygienists drove me up a wall. Maybe I am the only one who finds the lectures lead me to do the exact opposite. Or maybe those lectures are just geared toward people more like my child.

For the record, though, the lectures don’t work on me.