Happy feast day of St. Anthony! St. Anthony was a Franciscan—and who doesn’t love the Franciscans? He was apparently an exceptional preacher who loved the poor and the sick. But even though he may have had a way with words, he is quoted as saying, “Actions speak louder than words; let your words teach and your actions speak.”

When John and I were first married, we were living in a little apartment on Maryland’s Eastern Shore, and I prayed for job opportunities that would take us to the other side of the Chesapeake Bay. One of the saints I talked with the most was St. Anthony. Someone had told me he was a patron who could help with finding a job, and my Grandma Rose sent me a St. Anthony holy card with a novena on it that I said every day for the longest time.

One day when I was visiting the Shrine of St. Anthony in Ellicott City, I realized that St. Anthony was 36 when he died. I’m in awe of all he accomplished in his short life—and grateful to him for the many times he’s come through for us with lost items around the house. 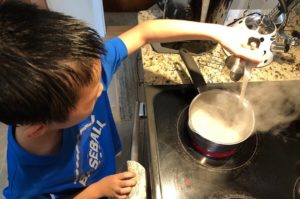 Our younger son still very much wants a pet bird, and I feel my opposition to the idea weakening with each week that passes. Meanwhile, my husband hung a hummingbird feeder his brother and sister-in-law gave to us. Our 10-year-old very carefully boiled water and added sugar for the hummingbirds, let his father fill the feeder, and now we just need to wait for them to show up.

At least the squirrel hasn’t raided it yet the way he gobbles through the regular birdfeeder. 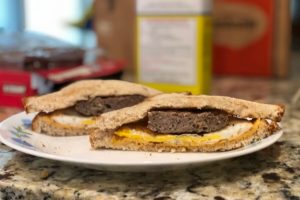 My children have taken up knitting again during this time at home, and now and then I think that would be a great idea. But what I’ve done instead is focus on creating the perfect egg sandwich for John.

I suspect St. Anthony wouldn’t like this because he talked a great deal about humility, but I think I’m coming closer all the time.

Right now we’re going with two pieces of wheat toast, a slice of American cheese, a fried egg, and a turkey sausage patty that just needs 30 seconds in the microwave. Slap it all together, let the toast melt the cheese, and serve.

I hesitate to say it’s perfect, not just because St. Anthony might be disappointed in me, but because the sandwich could continue to evolve. Stay tuned.

John ran into her again in a socially distant way, and she asked yet again. He came inside and pleaded with me to send him the recipes so he could print them. I did, and he went to do it and came back with a funny look on his face.

“I can’t believe it’s the Nestle Toll House cookie recipe,” he said. “All this time she’s waited for a recipe, and this is it?”

“Of course it is!” I said. Why would I use any other recipe? It’s on the back of the bag of chips.

I could tell John was disappointed. But he took the recipes over, and our neighbor was perfectly content. 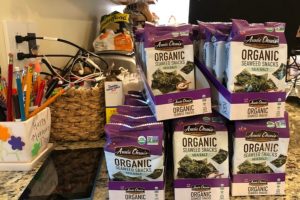 The boys go in waves with their snack food preferences. For the past few weeks, they’ve been excited about seaweed. We keep running out, so I finally ordered a bunch online.

When I told the boys I could only get three boxes, they asked whether it was being rationed.

I think I would prefer a situation where you can’t get seaweed, but you can get toilet paper and Clorox wipes. But not everyone may agree with me. 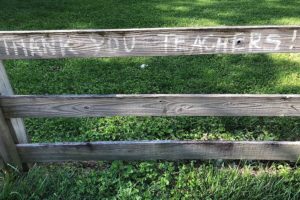 School is winding down, or maybe we’re just winding down and school is still happening. We have one week left, and I have no idea whether there are regular classes next week. I just know we have two very specific time slots for going to pick up our children’s items.

Apparently because I was pessimistic three months ago, I told both boys to bring everything home when they came home on March 13, and one remembered and one didn’t. But I forgot about art projects and having to return the math textbook and such, so we still need to go through this process.

One day maybe I’ll write about all our children have learned, but I think they’ve learned more about what their parents do professionally than they have about anything academic. 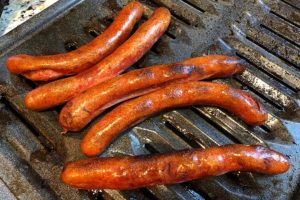 John is thinking about buying a grill. I love the idea that I might occasionally have someone else cooking dinner here.

Maybe because we have grills on our minds, we decided to have hot dogs and hamburgers for dinner. Our fourth grader wanted hot dogs “with burn marks” on them. I wasn’t sure what to do, but I decided to try to broil them. Usually I just boil hot dogs, but this time I googled “how to broil hot dogs to get burn marks on them.” Before you reach for your phone, I should tell you that there’s not much info on that specific search.

But there is info on how to broil hot dogs, and they turned out to be quite tasty. I’m not sure the marks met expectations, but everyone seemed happy. So, maybe we don’t need a grill after all.

Read more quick takes at Kelly’s blog, This Ain’t the Lyceum, and have a great weekend. And happy birthday to my brother-in-law George (today) and my sister Maureen (tomorrow)!