As the U.S. bishops met in Baltimore Nov. 15-17, they addressed a number of topics, including passage of a document about the mystery of the Eucharist and approval of a three-year Eucharistic Revival Project that will culminate with a national Eucharistic Congress in 2024.

The bishops also heard from Archbishop Christophe Pierre, apostolic nuncio to the United States, who encouraged the bishops to listen to their people, to each other and to the Holy Spirit.

The U.S. Conference of Catholic Bishops met in person for the first time since 2019. The global pandemic moved their last three semi-annual meetings online.

Archbishop José H. Gomez, president of the conference and archbishop of Los Angeles, said Nov. 16 he was glad to be meeting in person, since it was hirst first meeting as president that the bishops were face-to-face. He began his three-year term as president at the end of the November 2019 meeting. “We are able to talk to each other and share situation in our diocese.”

He said it was important that the bishops began their day Nov. 15 with a day of reflection, including prayer, reflection and adoration of the Blessed Sacrament. They went into executive session in the afternoon to hammer out details of revisions to a highly anticipated document, “The Mystery of the Eucharist in the Life of the Church.”

In the evening of their first day, more than 200 bishops and archbishops and six cardinals gathered at the Basilica of the National Shrine of the Assumption of the Blessed Virgin Mary for Mass, where Archbishop William E. Lori preached a homily focused on synodality.

In their discussions and actions, the bishops updated their socially responsible investment guidelines, which had last been updated in 2003. The policy adds guidance in areas such as telecommunications, media and social-impact investing, and expands consideration of steps ranging from no investment to engaging corporations on their business practices. A footnote added during amendment of the guidelines addresses progressive disinvestment from the fossil-fuel industry.

The bishops also voted to move up the timeline on a review of the Charter for the Protection of Children and Young People, which had been mandated for 2025, but will begin sooner.

The conference approved new statutes in English and Spanish on the catechumenate and accompanying liturgical rites for the Order of Christian Initiation of Adults, formerly known as the Rite of Christian Initiation of Adults, RCIA, in which those who are not baptized are brought into the church and welcoming into full communion with the church those who may have been baptized in the Catholic Church or another Christian denomination.

Archbishop Lori said Nov. 17 that he was pleased that the document on the Eucharist passed with such an overwhelming majority of the bishops, 222-8, noting that it showed “a oneness of mind and heart.”

“The document is meant to be a resource,” the archbishop said. “It’s meant to emphasize points of eucharistic doctrine and practice that may have been neglected over time – that needs, in our times, fresh emphasis.”

He said the teaching within the document will be made accessible to people of all ages and cultures in many forms and formats.

The bishops also heard a presentation from Auxiliary Bishop Andrew H. Cozzens of St. Paul-Minneapolis on a Eucharistic Revival Project that will begin in June 2022, culminating with a national Eucharistic Congress in Indianapolis in June 2024. Bishop Cozzens, who was recently named bishop of Crookston, Minnesota, chairs the Committee on Evangelization and Catechesis, which will oversee the ERP, which has as its theme “My Flesh for the Life of the World,” and the congress.

He noted that the USCCB meeting made available round-the-clock adoration of the Blessed Sacrament, and many bishops took advantage of that in the overnight hours.

He laid out plans for the next three years of the ERP, with diocesan phases in 2022-23, and parish phases the following year. He said the organizers expect that 80,000-100,000 people might attend the national Eucharistic Congress.

Archbishop Lori noted that the Archdiocese of Baltimore already had begun a Year of the Eucharist in June 2021. He said the local effort is “kind of a first taste of what will be unfolding nationally as we undergo together, in our whole country, a revival of faith in the Eucharist, a renewed experience of the presence of Christ among us, encountering him with one another in our eucharistic celebrations, inviting our fellow Catholics to come home to Mass, helping young people to realize what a beautiful gift the Eucharist is as they face the challenges of growing up in our culture.” He also noted that the Eucharist is “the source of all of our works of justice and charity.”

The bishops also heard a presentation from Archbishop Joseph F. Naumann of Kansas City, Kansas, and chairman of the bishops’ Committee on Pro-Life Activities, about an effort launched by the USCCB in 2020 to assist mothers in difficult pregnancies, “Walking with Moms in Need.”

The effort hopes to engage each of the 17,000 Catholic parishes in the country as a place to provide resources for pregnant mothers, offering practical assistance for children and mothers.

The goal of Walking with Moms in Need is not to turn parishes into pregnancy centers, but to raise awareness within parishes and the wider community about the already-existing resources available to pregnant women and their families. Already in the Archdiocese of Baltimore, 45 parishes are active in the program.

Archbishop Lori, who will take on the chairmanship of the Committee on Pro-Life Activities at the end of this year’s USCCB meeting, called the project “a really beautiful pro-life effort.”

“It recognizes the immense hurdles and challenges that women in difficult pregnancies face. And it’s a coming together of the church community to surround women in such situations with love, care, protection and concern,” Archbishop Lori said.

The initiative shows the goodness and beauty and truth of the church’s pro-life teaching, he added.

In his address to the bishops, Archbishop Pierre, the pope’s representative to the U.S., praised Walking with Moms in Need as a synodal program because it listens to women in order to understand their situations.

“Many expectant mothers are often suffering from loneliness, and common events, such as baby showers, are not part of their reality,” the nuncio said. “Parishes, by listening to what some of the spiritual, social and emotional needs of the people are, can accompany women – even with small acts of kindness.

“Concrete gestures, not mere ideas, show forth the maternal, tender face of the church that is truly pro-life,” Archbishop Pierre said.

Archbishop Lori acknowledged that a variety of societal conditions give rise to the prevalence of abortion, including poverty, misinformation and other factors, which the church must address as best it can.

“We also have to recognize that there are many powerful forces in our society that promote abortion, not as a necessary evil, but as a positive good, and that also has to be confronted directly and spoken to honestly,” Archbishop Lori said.

The bishops concluded the public portion of their meeting Nov. 17 and were expected to convene in executive session again Nov. 18. 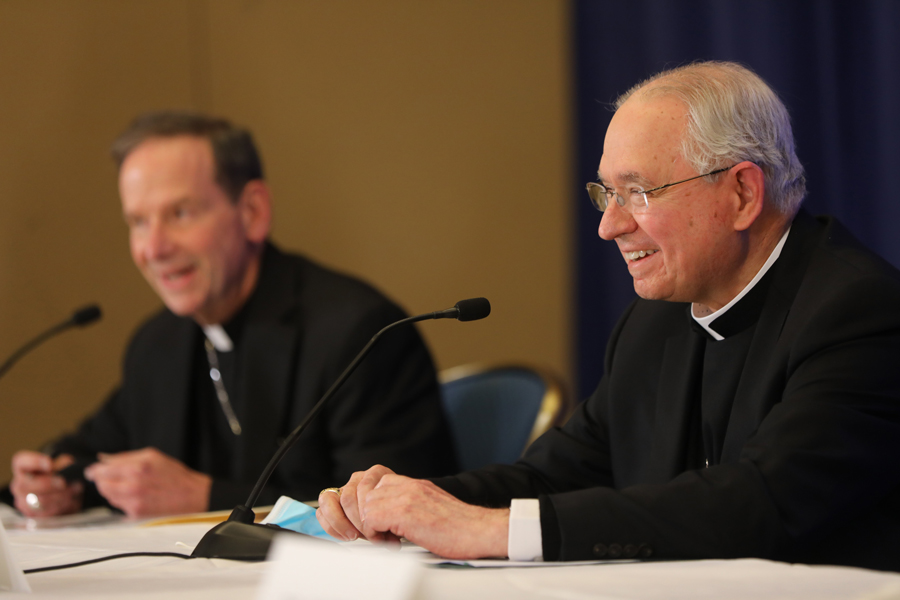 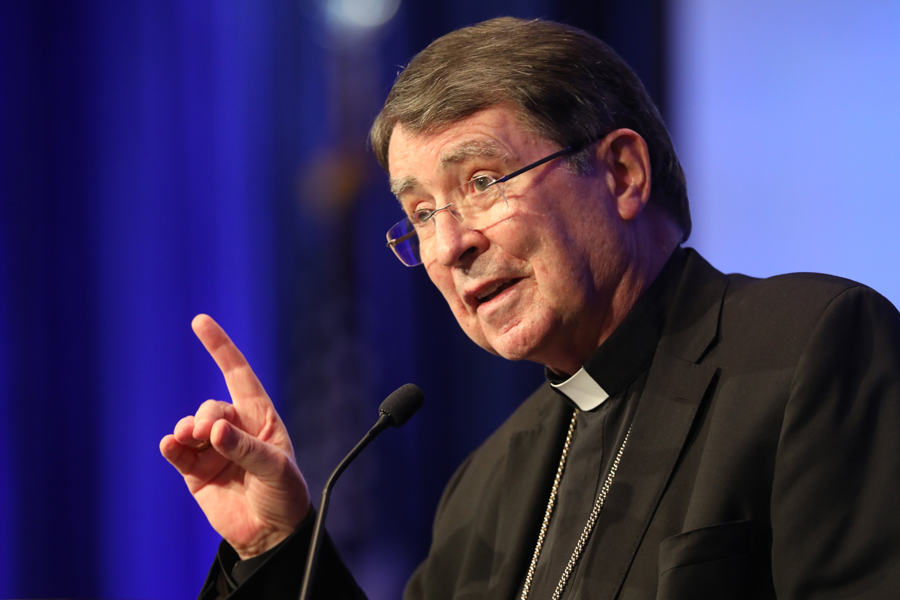 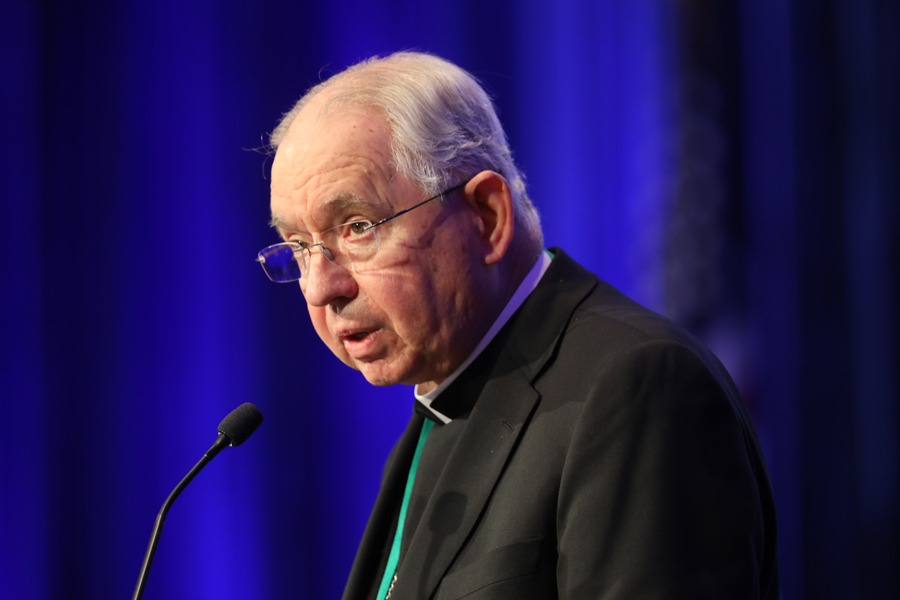 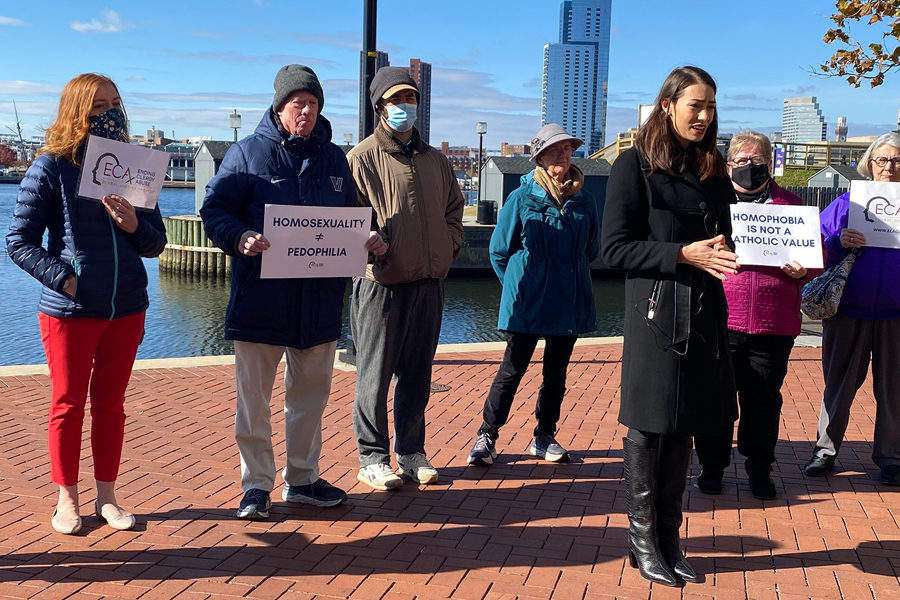