A few years ago Daniel and I started making paper towel snowmen to give to people at Christmas. It’s so simple. All you need are a roll of paper towels, a kitchen towel, a safety pin, a cup, a paper plate, tape, and markers. 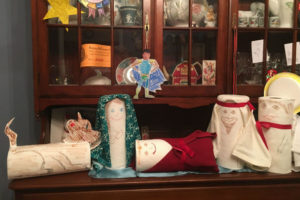 Doesn’t everyone need another roll of paper towels and a kitchen towel?

This year for the first time I had the idea to make a paper towel nativity scene. It has been so much fun to talk about what we’ll make next. But I think if we are truly doing it the way we intend to—with three kings and three camels, flocks of sheep, and hosts of angels—we might need to designate a whole room to display it. Or maybe a whole house.

The good thing is they will all be gifts, and we’ll pass them out to people who stop by over the holidays or as bread-and-butter gifts when we visit them. I keep saying that, but our guests who stopped by earlier this week didn’t want to break up the nativity scene.

Have you decorated for Christmas? My husband took care of the lights on the outside of our house, and they look great! We haven’t started on the Christmas tree yet, but that might happen this weekend.

Of course, it is still Advent, so there’s no rush. And here’s a piece I wrote about having an imperfect Advent. 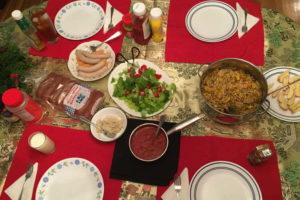 This week we celebrated the day when we met Leo eight years ago. I remember that day so vividly, how John and I waited and waited for him to arrive, and how he walked into the room on his own, and we took him in our arms. It’s hard to believe eight years have flown by since that day.

Dinner was his pick, and he had planned to go to P.F. Chang’s but when I came home from work, he and his brother were playing, and they didn’t want to go out. So Leo asked for noodles and sauce, and I cooked some hot dogs and some leftover lo mein.

It wasn’t a fancy dinner, but we used the tablecloth we bought in China, so it felt special.

Some days I still can’t believe I get to be the mother of these two children. I am so blessed. 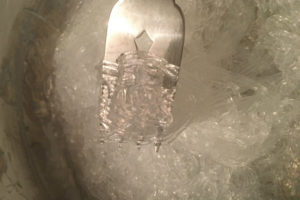 When we go to the grocery store, we almost always walk down the Asian food aisle. And I let my shopping companions pick whatever noodles they think look interesting.

This week I pulled some bean threads, I think they were called, out of the cupboard and cooked them. And…they disappeared. They turned transparent.

I served them anyway. The boys both tried them, but they didn’t like them. And their parents chickened out on even taking a taste.

So maybe we’re not the most adventurous family out there. 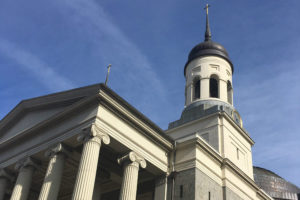 When a Mass was celebrated for my brother-in-law Eric at the Basilica this week, I took a break from work in the middle of the day and went. It was beautiful.

I was really struck by the closing of the priest’s homily when he reminded us of God’s love for us and told us not to underestimate God’s kindness.

He said, “God is full of surprises.”

I’ve been thinking of that this first week of Advent. 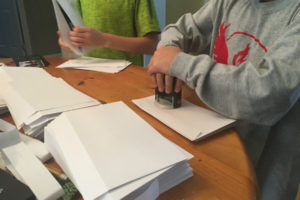 I had two eager helpers when I sat down to start our Christmas cards this year.

The whole operation went so smoothly that it’s hard to believe I am still not finished. If only they were also willing to keep my address list updated!

Maybe next year I can hand the whole process over to Leo and just stay out of his way.

Tomorrow is a big day for Daniel. He’ll make his First Reconciliation in the morning and have his 8th birthday party in the afternoon. For some reason I had decided he wouldn’t be able to memorize the Act of Contrition in time, so I had specifically asked one of our priests whether he could say a shorter version. He said that would be fine.

We stopped worrying about it and kept praying it at home, but without any pressure.

Then last week after Sunday School, Daniel’s teacher told me that our second grader stood up and said the Act of Contrition for the whole class.

So apparently he knows it.

Oh, and we surprised him with an early birthday gift last weekend…the electric guitar he had been hoping for. You can see the moment he spots it here.

No quick takes to link up to today, but I hope you have a wonderful weekend!