What were your favorite books when you were a child? Our younger son’s current favorite is The Trumpet of the Swan by E.B. White. It was one of my favorites when I was a child, but I think—thanks to my little boy’s enthusiasm—I’ve read it more times as a grownup.

If you haven’t read it, I recommend it. It’s funny and sad and sweet and inspiring and the cob—the main character’s father—is the best. We basically have the book on repeat as our nighttime reading, and I laugh every time.

So, of course, when we had the chance to stop and see some swans the other day, we pulled over and visited with them. None of them played a trumpet for us, but we still loved seeing them up close. 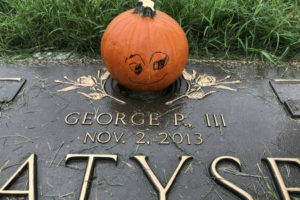 It’s still September, but Daniel and I picked out pumpkins early because we knew wanted to take one to our nephew Georgie’s grave.

Our third grader wanted to carve one for home, so he did, and then his big brother drew faces on both sides of Georgie’s pumpkin. We are hoping the Sharpie face on a pumpkin lasts longer than a carved pumpkin would.

We have never carved a pumpkin this early in the season, and I never like to rush a holiday to come. But we also tend to get to the night before Halloween and have a frantic pumpkin carving session. So this was quite mellow and laidback. 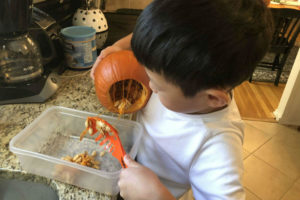 Every year when we carve the pumpkins, someone wants to try pumpkin seeds. This year I gave in and tried again. Again no one really liked them.

I love them off the shelf in the grocery store, but I don’t love them homemade. Isn’t it supposed to be the other way around?

We did save a few to plant in our yard.

I’m sure we’ve missed the window of opportunity for that, but I’m also willing to bet that the child who insisted on trying to grow a pumpkin patch has a lucky green thumb.

For months our dryer has been making these horrible noises. For a while it was this high-pitched noise that was horrendous. No one else in the house seemed as bothered by it as I was, so I tried to shut it out. And then one day the noise changed. It was still horrible, but not as horrible to me and much worse for my husband.

We talked about fixing the dryer for a while. Then one day my husband went out and ordered a new dryer. And it arrived on our 14th anniversary!

The new dryer is incredible. It truly is a gift. It’s quiet as can be, and everyone is happier. I am struggling to think of an anniversary gift we’ve enjoyed more. But I’m not trying all that hard because the house is blissfully peaceful. 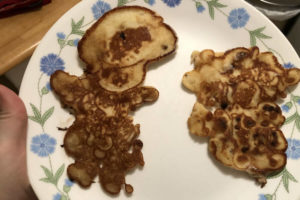 Since our gift to each other was the dryer, I woke up early on our anniversary morning, and Daniel and I made chocolate chip pancakes and sausage.

“Maybe we should make heart pancakes,” I said.

He took over the bowl of batter and the stove. A minute later when I looked over his shoulder, I saw that he had created…well…us.

John is obviously on the left, and I am on the right. 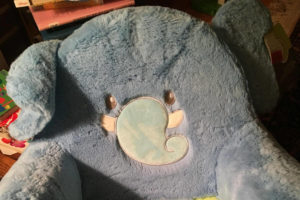 We celebrated by going to work and school and coming home to leftovers for dinner. That evening I Googled to see what the traditional 14th anniversary gift is. And you won’t believe what it is.

Well, it’s not a dryer. Or pancakes. It’s elephants and ivory.

As it turned out, my husband had worn his elephant tie to work. And my sister Treasa texted me a photo of an elephant chair she found that I had been wanting to buy for one of her sons for their first birthday, which is coming up next week. Now I just need to pry it out of her fingers so I can wrap it–and find something for his brother. 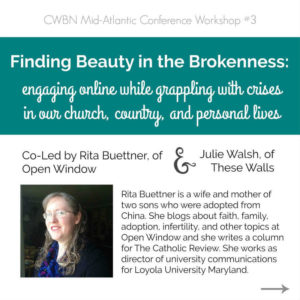 Have I told you about the conference I’m planning with my friends Julie Walsh and Theresa Conlan? It’s for Catholic women bloggers and writers and microbloggers and artisans, and we’re holding it at the Shrine of St. Anthony in Ellicott City, Md., on Oct. 13.

It’s coming up quickly! But you still have time to register—up until Oct. 1. It’s going to be lovely. Annie Deddens of Pray More Novenas and Catholic Wife, Catholic Life and Colleen Murphy Duggan, author of Good Enough Is Good Enough: Confessions of an Imperfect Catholic Mom are speaking, and we are offering three workshops, one led by Ginny Kochis, one led by Theresa, and one led by Julie and me.

I’m really excited about the conference. I’ve gone the past few years, and I always come away feeling refreshed and rejuvenated and excited to have connected with so many other Catholic women who are sharing their voices and perspectives amidst the wonderful craziness of daily life.

Read more quick takes at Kelly’s blog, This Ain’t the Lyceum, and have a wonderful last weekend of September!