Every Lent we fill a basket with slips of paper with the names of people we know—living and deceased. We pull one out every morning and pray for that person that day. It’s a simple concept, but it works well for our family.

We all contribute names, and it’s somehow really exciting to see whose name comes out of the basket every day. Some days it’s an individual, and some days it’s a whole family. We share stories and memories that day and—if the person is living—we usually reach out to say we are praying.

I would like to try to do it all year, but it is more special that we only use the basket during Lent. 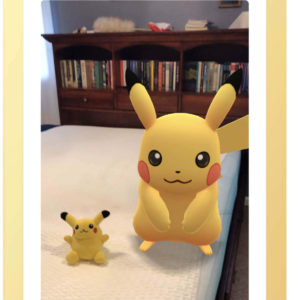 I’d also like to give something up for Lent. I have been mulling over a few different ideas. One year I gave up iced tea. Another Lent—before we had children—I made it to Mass almost every day. I can’t pull that off this year.

I thought about going to bed earlier every night, but that would cut out blogging, which I consider to be part of my self-care. And I do some of my best writing for work late at night, too.

My latest idea is to give up games on my phone. My older son thinks I will fail. My younger son thinks it’s a terrible idea because we would stop making progress in Pokemon Go. Meanwhile, the boys have been setting up elaborate Pokemon photo shoots with virtual Pokemon in the house. But we could probably live without those until Easter.

Are you giving anything up for Lent?

Spelling words are not my favorite part of homework, but I can usually muddle my way through. Last night, though, when I was asking our fifth grader his words, for the first time he corrected my pronunciation of a word: ephemeris.

Maybe you know how it’s pronounced, but I learned that I do not. I still don’t. But it will be spelled right on the quiz—if there is school. Sometimes there’s school, and sometimes there’s no school. When I declared this the first full week in a long time I doomed us to at least a delay. 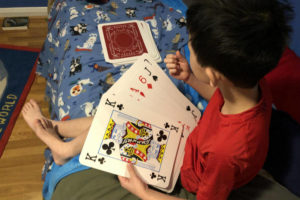 Our boys received jumbo playing cards from Santa for Christmas—one set for them to share. Somehow it took us two months to open them and start playing with them.

They are hilarious. It is amazing how it transforms a card game to be playing with giant cards.

I tried to play Spit against one of the boys the other night, and it was so arduous to have to move these huge cards. Shuffling is its own challenge. But we’re having fun with them. And, I must say, we haven’t lost a card yet. So that’s a big change for us. 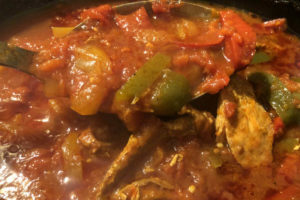 The other night I dropped a bag of children’s books off at my sister Treasa’s house, along with some homemade cookies, and she spent 10 minutes looking for some silverware to return to me. It occurred to me that we never see each other without having something to hand off—a pie plate or a cookie sheet or a piece of Tupperware or a rooster puppet that’s missing its eyes.

Can you really be related if you see someone and don’t have anything to exchange? This is one of life’s great questions.

I might have to fill a container with chicken cacciatore for Treasa’s family and drop it off tomorrow if I can’t get more people interested in it in my house. I think it’s pretty good, but not everyone agrees.

Our sons’ elementary school has a relationship with Under Armour, and the company tests some of its products on the children. Earlier this week our fifth grader came home with a brand-new set of Under Armour shoes. He just happens to be the right size to wear the shoes, I guess. He’s so happy, and his brother is not as happy.

I explained that it’s like in Cinderella. If your foot is the right size, you get to marry the prince. They don’t think it’s a good analogy at all, but it seems just right to me.

My mother pointed out that it’s great for Under Armour because now the child who didn’t get the shoes will be asking for new sneakers. 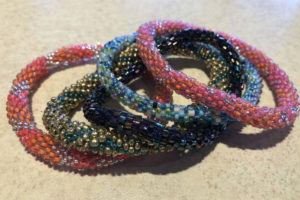 Yesterday while walking through our lobby at work, I ran into a lady who was selling bracelets made by women in Nepal. They were absurdly affordable, lovely, unusual, and seemed to be for a great cause, so I picked out a few and gave them to colleagues and friends.

Now I wish I had bought a few more for all my nieces. I’m hoping I might run into the bracelet seller again.