Our younger son has been asking me to bake a cake.It’s an unusual request in our house because neither of our boys care much for baked goods.

But it’s back-to-school week. And when I can’t think of a good reason to say no, I try to say yes.

Besides, we’ve made it halfway through the first week of school. The homework hasn’t really kicked in, both boys are giving fairly positive reviews of school so far, and we quickly found a fantastic afterschool sitter—to fill in at least for now—after our planned child care arrangements suddenly fell through on Sunday. Come to think of it, I should probably be planning a parade with fireworks. We could at least have dessert.

So I picked up a box of cake mix and icing, and we baked a cake. I frosted it, and our third grader topped it with sprinkles.

He was so happy about his cake. He beamed as he admired it. 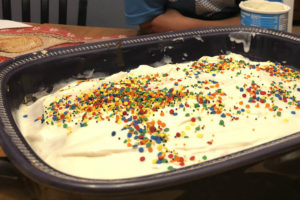 He took the container of frosting, which still had plenty of gooey vanilla goodness inside, and sat down with a spoon to polish it off.

“It would have been easier for me just to get you a container of frosting,” I said. “I didn’t even need to make the cake.”

He just smiled his little grin and kept licking the icing off the spoon.

I love that he wanted me to bake the cake, but in the end, he didn’t really care about the cake. He just wanted the icing. But he knew that if he asked for the cake, he would get a taste of frosting. And he did.

So he got his treat. And me? I have a cake and one happy, happy boy, whose tummy is full of frosting tonight.