Our younger son brought home this beautiful pastel drawing of a cityscape. I don’t know what the assignment was or whether it’s inspired by a famous artist. I just know I love it. 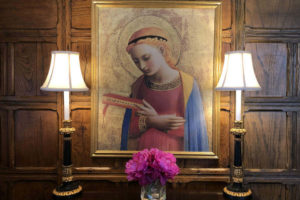 Speaking of art, when I wrote about the Annunciation earlier this week, I failed to give you all the information my art-history-major sister shared about the Fra Angelico painting I shared. She told me that she recognized it as the Annunciation because the Blessed Mother was holding a book. I never realized that, beginning in the 9th century, Mary was often depicted holding a book at the Annunciation. Apparently, there was a belief that Mary was reading the Old Testament alone and in silence when Gabriel arrived.

St. Ambrose even believed Mary was reading Isaiah 7:14, “Behold, a Virgin shall conceive in her womb and shall bear a Son.” In that moment, Mary was intimately connected to Word of God and the Word became flesh in the conception of Jesus.

You can read more about it here. 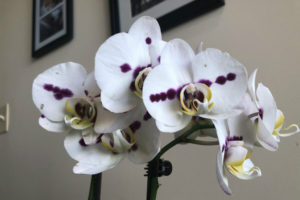 An orchid appeared mysteriously at our office the other day, placed on a table near the entrance. Chances are it’s not a mystery to anyone except me, but I have intentionally not asked where it came from. I like the idea that an orchid might simply appear just as a penguin might stop by the library.

Also, with my record with houseplants, the orchid has a better chance if I barely stop to admire it. So I took one photo and kept going. But I hope it continues to thrive. 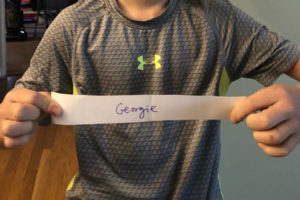 Every morning when we pick an intention from our prayer basket, we are excited to read the name. Yesterday it was Georgie’s turn.

Georgie’s whole family was on a slip of paper a couple weeks ago, but Georgie gets his own slip because—even though he’s already in heaven—he’s such an important member of our family. If I go too many nights without mentioning him in bedtime prayers, our younger son reminds me about Georgie.

We took a photo right away and sent it to Georgie’s parents so they would know it was his day. One of my favorite parts of this Lenten tradition for our family is letting people know we are praying for them and the people they love. 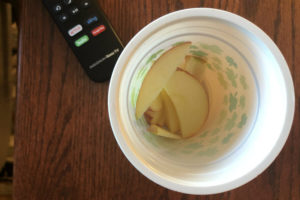 My husband had to work late one night this week, so I let the boys eat dinner in front of the TV—a very special treat.

Before we started dinner, I sliced apples for them and served apple-tizers.

I’m sure it’s not as funny as I thought it was.

Still, the boys seemed to think the apple-tizers were funnier than calling the hamper “the hamster,” which is one of my other household campaigns that hasn’t quite caught on—at least not yet. 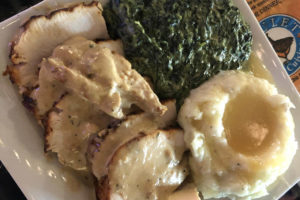 One morning this week one of the boys woke up craving McDonald’s French fries, and the next day he was begging for spinach.

Before becoming a mother, I never realized how important food would be to parenting.

And I never expected that I would have to come up with spinach for dinner to satisfy a 9-year-old.

But I’m not complaining. And we did find him some spinach. 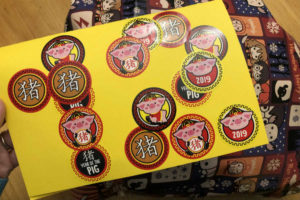 My biggest quick takes fan is turning 12 this weekend. Twelve! I can’t wait for her to open our gift, which we shipped to her this week. I can’t tell you what it is because she reads these quick takes religiously. I want her to be surprised—and I know you feel the same way.

I can tell you (because she’s reading and will have it in her hands soon enough) that we wrapped it in Harry Potter paper and made her a Year of the Pig card because this is her year.

Today I wish my fellow third-child niece the happiest of birthdays and dedicate these quick takes to her, of course. Happy birthday, Elise! May your birthday be everything you ever dreamed it would be, and may your gift leap out of the paper and into your arms, ready to give you all of the hugs we gave it before we wrapped it.