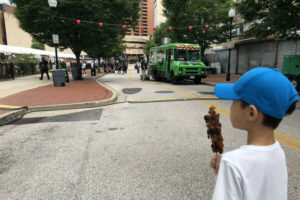 Weeks ago when I heard that Baltimore’s Chinatown Collective was planning the Charm City Night Market, I marked my calendar. I could not wait to go and kick off the Moon Festival with Asian food and music at a festival near Baltimore’s former Chinatown.As the day drew closer, I could tell that not everyone in my family shared my over-the-top enthusiasm for this event. And, although we try to celebrate our children’s Chinese heritage, we also don’t force it on them, so I wasn’t going to insist on it.

I was fairly confident, though, that I could entice our younger son to join me for an adventure—and I was right. So our third grader and I headed downtown early to secure a spot and scope out the event. Even before the festivities got underway, there were Chinese lanterns strung across the street, the smells of delicious Chinese, Thai, Filipino, Korean, and many other kinds of food filling the air, and people were starting to gather. 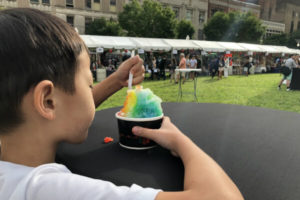 We had a great time walking around the vendor areas to see what was for sale and to chat with the vendors. Then we walked the stretch of the festival checking out the food options before committing to anything. Pork belly, steamed buns, lo mein, drunken noodles, bakery items, smoothies, rice bowls…it was overwhelming in the best possible way.

Then my son spotted a chef searing different meats on a smoking grill, and he knew what he wanted. We jumped into line waiting for a sure-to-be-delectable teriyaki chicken-on-a-stick.

As we waited our turn, a man approached me, and I knew he was going to ask me for money. He apologized for bothering us, hoped I wasn’t offended, but he said he was homeless and would like some money to get something to eat.

I never like opening my wallet in front of people, but I had money in my hand. It wasn’t much, not even as much as I would end up spending on the chicken-on-a-stick. But it was something. He and my son said a quick hello, and our little boy gave him a big friendly smile. I asked his name, and his eyes lit up and he told me, along with more about himself. 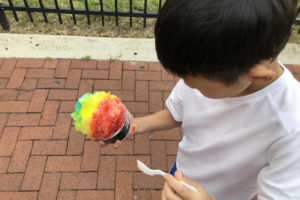 As he walked away, I thought, as I do every time, that I don’t know his story or how he will use that money. Maybe he’s getting help through a new program he’s starting next week, as he said he was. Maybe he isn’t. Either way, he needs the money more than I do. And, although I don’t always give when asked, and I know we can and do give to programs that serve individuals who are dealing with homelessness and hunger, I do want to teach my son to see people and respond with kindness. So, when he’s with me and I have cash, I usually do give something. So I did.

Then we were back to the excitement of the Charm City Night Market. My young festival friend loved the teriyaki chicken and followed it up with an enormous rainbow shaved ice. We walked through the park where the vendors were gathered, and I tried to decide whether my niece needed a rat tote bag or my twin nephews would like Baltimore-themed onesies. We both wanted some of the Japanese-style stuffed animals, but we resisted the temptation. 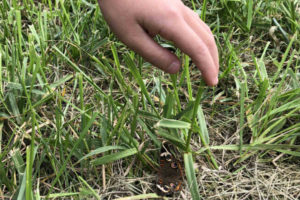 The most wonderful discovery in the park were the grasshoppers and butterflies who were hiding in the grass. My son spotted them, and we could have spent an hour just admiring them. Instead we walked carefully across the grass, watching each step so we wouldn’t crush them.

We stopped to look at some origami creatures hanging from one tent. We smiled at and chatted with people we will probably never meet again. It was a beautiful, relaxing afternoon in the city, and we made the most of our time there.

Eventually, we decided it was time to go, and we headed back to our car, stopping for a moment on the steps of St. Alphonsus—one of my favorite churches in the city. 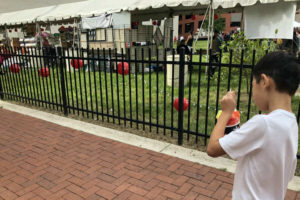 I’m pretty sure we didn’t learn anything we didn’t already know about Chinese-American culture, but we had fun—and any day with a rainbow shaved ice has to be a winner. We went home full of stories of what we had seen and done and enjoyed. It was a fantastic event, and I hope it returns and expands next year.

But as so often happens, I find it’s not the Charm City Night Market itself that left an impression. I keep hearing about the butterflies and grasshoppers that we discovered in the grass. And, at Sunday Mass, as my son was praying, he suddenly patted my shoulder and whispered, “What was the name of the man we met at the festival?” And I told him. Somehow, not surprisingly, he keeps working his way into our prayers.

The little bit of money we gave that man won’t have an impact on his life. But our encounter with him has touched my son’s. And who knows how he’ll look back on that in the future.