Last October I blogged every day. It was hard and amazing and good and challenging. I felt I grew spiritually, as I tried to emulate St. Therese’s little way, seeking holiness in the ordinary.

At the end of the month, my mother told me she didn’t think blogging every day was a good idea. She mentioned that I had been rather cranky about writing every day. I was having such a great time (or thought I was) that I hadn’t even noticed.

So this October I am not blogging daily. I am not sure I am a ray of sunshine as a result, but I also don’t know that I would have had time to write a new post every day. 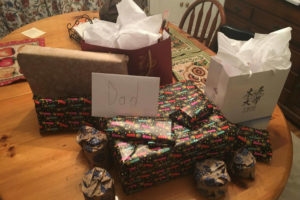 This week we celebrated my husband’s birthday—and it was a big one! I thought about a party with friends and family and decided I would enjoy that more than he would. I thought about a trip and then remembered you have to have free weekends to take a trip, and our weekends are full of soccer and Sunday school.

So the boys and I decided to buy 50 gifts and wrap them up for him to unwrap. I’m not sure there were 50. Each of us counted and came up with a different number. But we had fun, and we went to Pizza John’s for dinner. Then this weekend we went bowling.

We’re so blessed to have him in our lives, and I don’t ever take that for granted.

I have such an exciting thing I want to tell you—two things, in fact—but it’s not my news to share, so I have to wait until it is.

Last weekend Daniel and I went shopping at Goodwill. He was hoping for an instrument of his very own. His brother is playing the trumpet, and he wants an instrument he can carry around the house and play, especially when we are rocking out to “Tour the States,” the only song we listen to since we are trying to learn the state capitals. 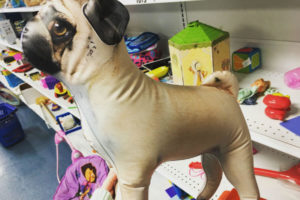 But I don’t want to spend lots of money on another instrument, so Goodwill seemed like a good idea. Well, it turned out it was half-off day at Goodwill, and the world was there.

If you were there, and I didn’t say hello, I’m sorry. Daniel and I were in pretty serious shopping mode.

And then we saw the most amazing thing: an inflatable pug. We both stopped and stared.

We have a few pug enthusiasts in our lives, and one in particular was coming to mind for me. I was a little startled to think that an inflatable anything could be sold used. I’m not a huge germophobe, but you know someone’s lips have touched that pug. And…it’s an inflatable pug.

“Should we buy it?” I asked Daniel. “Is an inflatable pug a good gift?”

“I don’t think so,” he said. And this was one of those times you trust your second grader’s intuition because he usually wants to buy everything for everyone.

Together we came to the conclusion that the greater gift was NOT giving someone a used inflatable pug. And I believe it was.

The battery on our kitchen clock ran out weeks ago, and for weeks it said 3:25. At first it was annoying, and then I started to think it was hilarious. We so rarely see the clock at that time, and it threw me off every single time I looked.

The battery has since been replaced, and life is back to normal. But I sort of miss calling out, “It’s almost 3:30! We have to hurry or we’ll be late for school!” 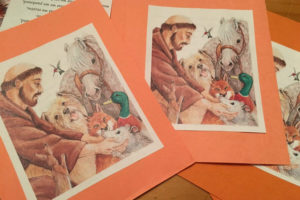 I’m having such a great time teaching in our Sunday school program, which is called Orange. The idea is that the red love of the family blends with the yellow light of the church to make orange. And so, of course, my co-teacher and I feel we should wear orange and bring orange things and make orange prayer cards and find ways to use “orange” in puns.

I found an orange pillow online and ordered it so our group of second graders could take turns sitting on it and sharing what they are grateful for during the week. It’s our “Orange You Glad” pillow. Because they are second graders, they think it’s fantastic.

If you’re groaning, I imagine you’re not a second grader—or you’re a pun enthusiast, not to be confused with a pug enthusiast.

Soccer season is ongoing, and I have been enjoying watching our boys throw themselves into their games and practices. They both love to volunteer for the goalie spot, and I sit on the sideline holding my breath, wondering what it is that makes a child want to be a goalie. I would fail under that kind of pressure, worried I would let all my friends and teammates down. 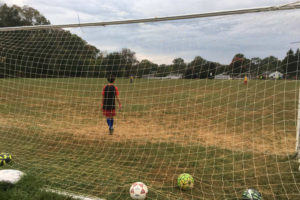 But as I watch our boys taking their turns in the goal, I also think of God and how He watches me put myself in difficult situations I could avoid. Maybe He holds his breath a little too, thinking, “Why doesn’t she leave 15 minutes earlier so she’s not so stressed about getting everyone fed before soccer practice?” Or “Why doesn’t she make a grocery list before she goes to the store so she won’t realize on Tuesday night that there’s nothing to cook for dinner?”

Of course, He probably also watches me knowing that I’ll grow from those experiences and that even if I fail, I will be all right—and maybe a little better off.

So I try to watch our sons and just trust that these moments in the goal are fleeting and will only strengthen them, even if—and maybe especially if—they don’t perform well.

Then I’m astonished when they actually do just fine.

Read more quick takes at Kelly’s blog, This Ain’t the Lyceum, and enjoy this beautiful weekend!