I had thought we might have hamburgers and hot dogs for our Fourth of July dinner, but my husband suggested we go another route. He was craving caprese, and our boys wanted won ton soup. So, we had a varied buffet of appetizer-ish items. They didn’t necessarily go together, but everyone ate and seemed satisfied.

If you can’t have what you want for dinner on Independence Day, when can you?

When we were waiting to adopt our older son 10 years ago, one of my friends gave me a water table. During our little boy’s first summer with us, he played with the water table all the time.

Then we adopted his little brother. The two of them would spend hours playing with the water table. I loved that you didn’t have to put them in their bathing suits—even though they always ended up wet anyway. 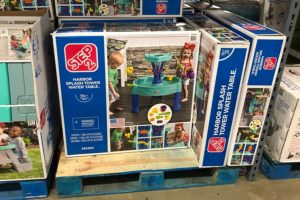 Our boys never really grew out of the water table. It became the perfect water gun filling station before John and I finally decided it was time to hand the table down to their younger cousins.

So, when I was invited to a shower for our friends who are adopting a little boy from China, I thought maybe I would give them a water table. My boys and I looked all over for one, but we apparently didn’t look hard enough. The only place I could find one was online, and it wasn’t going to arrive in time.

The shower was Sunday. And I walked into our grocery store on Monday and…there was a water table. We went into another store yesterday and there was another one. I expect to see several more next week. 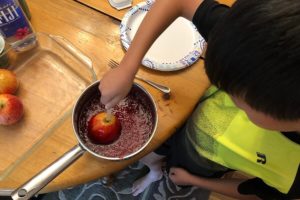 Around Halloween our younger son talked me into buying a candy apple making kit. I hid it in the kitchen where I thought no one would ever find it until he spotted it this week.

Suddenly on one of the hottest, steamiest evenings of the summer, he and I were scrubbing apples and stirring a pot of red syrupy liquid on the stove.

I’m not sure how many people make candy apples in July, but we can count ourselves in that group. 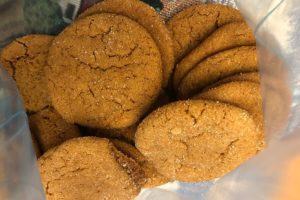 Because this week wasn’t sweet enough, my older son mentioned one night how much he would love some of his Grandpa’s molasses cookies. When my father hears that someone wants some of his cookies, he drops everything and makes cookies.

My parents live in an un-air-conditioned house in Baltimore. And it’s July. So, my father may have burned off some Purgatory time (if he has any to burn) while he baked the cookies, but he came through. He even drove the 15 minutes to our house to put them in his grandson’s hands.

Both boys were thrilled. The candy apples may have looked exciting, but the molasses cookies were actually eaten—and quickly, too.

One day this week, I met my high school advisor for lunch, and she showed me a photo one of my classmates had sent her of her toilet with a face.

I thought it was brilliant, and I couldn’t wait to give our toilet a little more personality. 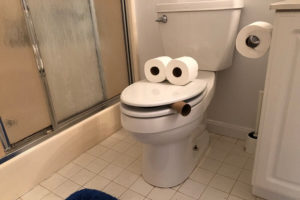 Our toilet has been running at times when it shouldn’t, in a way that my husband says is actually called “a phantom flush.” Yesterday I gave our toilet a face and called my younger son into the bathroom to let him in on the joke.

Then we went to find Dad to tell him he had to check the phantom flush.

It’s such a silly, simple thing, but whenever we do something like that, I think maybe this is the kind of memory the kids will laugh about years from now. 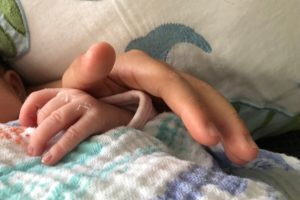 I took our boys over to meet their new little cousin last week, but they hadn’t held her. When I stopped by to visit with our 9-year-old yesterday, I asked whether he could hold her. He sat proudly on the couch and waited as she was placed in his arms.

He posed for a few pictures, but he also spent time studying her face and her little hands. He was fascinated.

When she started squirming, he handed her back. Then he ran around the living room playing catch with his 21-month-old twin cousins. He’s just so sweet with younger children. 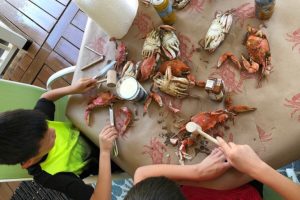 It’s July! How did that happen? This summer is flying by. July is my favorite month of the year. It’s wonderfully hot. It’s exquisitely humid. It’s the heart of the summer. There’s no school and no pressure to think about buying school supplies.

July is also my birthday month. Maybe I should have led with that because that is probably the main reason I enjoy it.

Even if you don’t love heat and humidity and this is your unbirthday month, I hope you are enjoying your summer.