He wasn’t even supposed to be there.The slender 15-year-old cat had been at the vet the day before. His health was failing, and there was nothing more that could be done. He would have been put to sleep then and there if his owner hadn’t balked and brought him home. 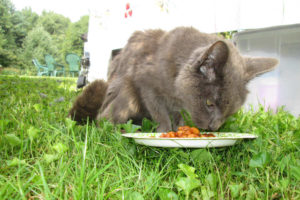 The Gray was given a brief reprieve and a chance to be present for a crab feast held at his house. So here was this elderly cat wandering around, apparently enjoying the festivities as much as anyone else.

Somehow knowing that this cat might not have been part of the day at all made me even more aware of his presence. You could tell he was in poor health, but you could also see his interest in the day—particularly in the food.

He slipped back and forth between the kitchen and the table of cheeseburgers, hot dogs, and side dishes.

The Gray wasn’t after a hot dog—and certainly had no interest in the steamed crabs. It was the tray of homemade baked beans that was calling his name. And even though his body may be failing him and his eyesight is gone, he dug his claws into the tablecloth and pulled himself up to try to get a mouthful of the baked beans. 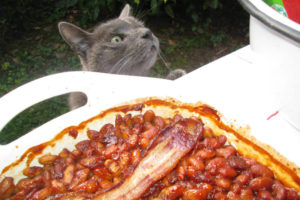 I was very little help to the hostess in that moment, laughing and watching in admiration as the cat climbed up toward the beans. We filled a plate for him and placed it on the grass within his reach. And he ate.

My cat allergies are bad enough that I usually avoid cats. But somehow I felt a connection to this cat who might not have been part of the day at all, a cat who has lived 15 years and, despite his health issues, still finds the strength to make sure he enjoys some part of the festivities.

As we were leaving, I held the kitchen door for one last time for The Gray. He walked majestically past, the way cats do, not stopping to be petted, not looking for anything else from me. What more did he need? He had had another day of food and friends and family.

So had everyone there. It just took a cat to remind me of how much I had to be grateful for.