Six weeks or so into the school year I’m feeling a little out of my depth.

Meanwhile, I decided it was time to check in with our fourth grader’s teachers to clarify expectations—for me and for our son. They showed me test scores and talked with me about him. I left feeling so proud of him and sure he’s in the right place.

There is nothing like the feeling that your child is in the right school. And I cried a little as I left. I’m just so proud of him and relieved that he is making progress. 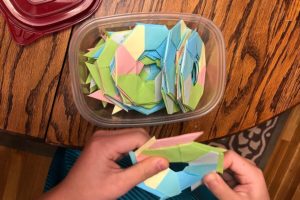 When I went to bed, he was lying in his bed, still folding. I figured he would fall asleep, and eventually he did.

The next morning, he sprang out of bed, ready to go. The stars were all folded and ready to go.

“Wow,” I said. “I can’t believe you finished. What time did you fall asleep?”

Yikes. I don’t think it could have been because he was full of energy, bouncing around the house, counting the minutes until we could go. But he was definitely up later than I was. 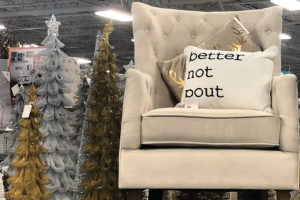 We are looking for stools for our breakfast bar, so we went shopping at a store in Frederick, Md., that one of John’s sisters recommended. It’s called At Home, and they did have lots of stools. Somehow we still couldn’t find quite what we were looking for.

I think maybe it’s time for me to acknowledge that I think I’m not at all particular, but I am, in fact, incredibly picky. Or maybe I just enjoy the hunt. So, we didn’t buy a single stool. 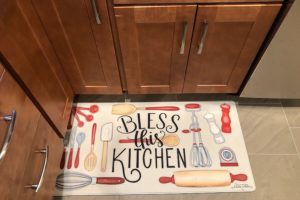 Part of the reason I didn’t buy the pillows is that I don’t usually look for ways to integrate words into my decorating. I don’t know what it is because I adore words. I live and breathe words. I spend much of my life creating words. But I don’t really care for words in décor.

I was explaining this to my husband and children in At Home when my husband picked up a kitchen mat with words on it.

I am actually not crazy about the words, but I couldn’t resist the colors and the kitchen utensils. So, we brought it home. Maybe I need to rethink my approach. 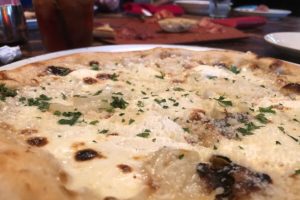 My husband loves brick oven pizza. So, while we were out in Frederick, he did a quick search and found a place with Naples-style pizza.

I think I once took a train through Naples, maybe, but I know nothing about Naples-style pizza. But this pizza was unbelievable. I ordered the white pizza, and it was flavorful and light and with a crust that was delectably thin.

I’m not sure it would be worth driving almost an hour to Frederick just for pizza, but I’m not ruling it out. 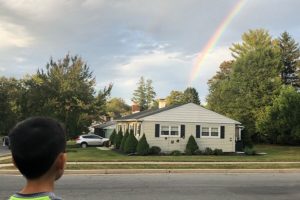 One afternoon, we were driving home when it started raining.

Just as we were approaching our neighborhood, the sun came out.

“We should look for a rainbow,” our 9-year-old said. It made me smile because I have said that many times, but now he is looking for them himself.

Almost a moment later, he spotted one, right over our neighborhood.

There are few things as magical as a rainbow—even when you can’t find a pot of gold at the end.

I’m part of a diversity reading group at work this month, and I simply cannot keep up with the reading.

This week when it was time for our meeting, I was in the middle of an urgent project and realized I would be late. But I decided to go—even though I was late and behind in the book we are reading, The Pearl that Broke Its Shell.

My colleague who is leading our group had arranged for us to Skype with Nadia Hashimi, the author. We had such a delightful conversation. I asked her about her writing process, how the story changes as she writes, and how she selects the titles.

Afterward, I felt so grateful that I had gone even though I didn’t feel ready and knew I would be late. It was a good reminder to myself that sometimes even when you are unprepared, you can be present—and that is enough.