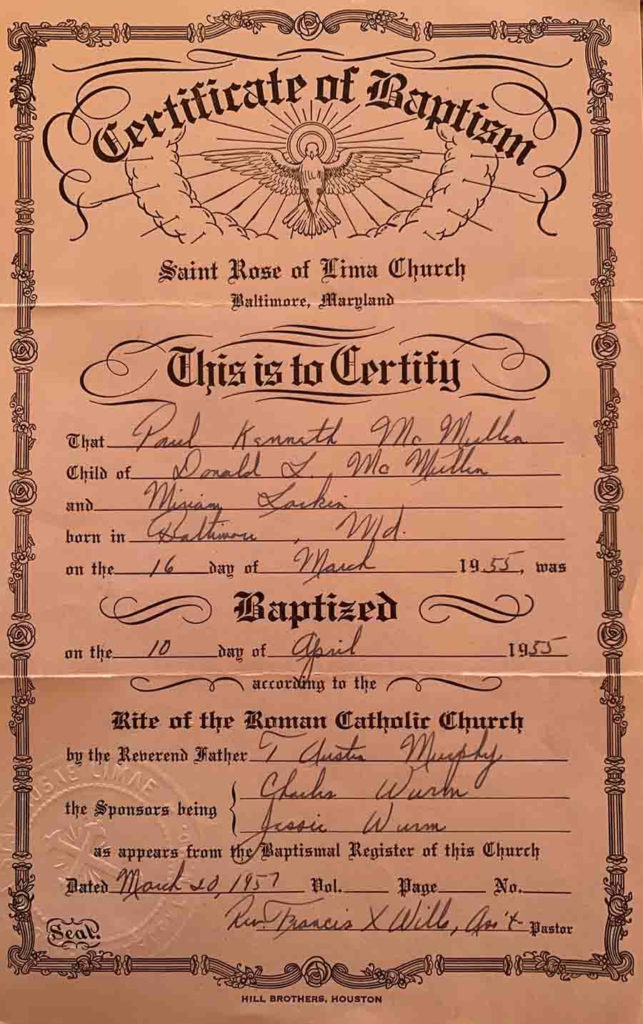 Worshipping at Our Lady of Mount Carmel in Essex, I’ve become spoiled by the homilies of Monsignor Bob Hartnett, the pastor. He succinctly provides context for what was going on in the world when the day’s readings were written, and how they apply to the faithful today. Father Bob has set a very high bar for the other homilists I hear around the Archdiocese of Baltimore, one that Father Rey Landicho, his associate pastor, cleared with ease Jan. 12.Many, myself included, were still coming to grips with the Ravens’ upset loss to Tennessee in the AFC divisional playoffs the night before when Father Rey got our attention, on the Feast of the Baptism of the Lord, with this question: Do you know the date of your baptism?

We all know our birthdate, but what about the day you became a child of God? Father Rey went on to share that, in his native Philippines, a baptism is an important event. His talk about Jesus and John the Baptist stuck with me, to the point that I had my wife, Mary, dig into the firebox that holds our vital documents and pull out my official Certificate of Baptism.

I experienced my first sacrament April 10, 1955, at St. Rose of Lima in Brooklyn. Father T. Austin Murphy did the honors, seven years before he became an auxiliary bishop for the diocese. He was already in demand, as my certificate was filled out and signed, nearly two years later, by an assistant pastor, Father Francis X. Wills. (I keep dropping Father Wills name into recollections, which has led to a pleasant email exchange with his niece, Peggy, a regular at St. John in Westminster). My godparents were Charlie and Jessie Wurm, who was the second oldest of my father’s 11 siblings.

What was happening on the Sunday I was baptized?

In Paris, Jesuit Father Pierre Teilhard de Chardin, the controversial philosopher and scientist, died at age 73. In Augusta, Ga., Cary Middlecoff won the Masters golf tournament by a record seven strokes over Ben Hogan. It was the year before CBS began televising the rite of spring, so my father would not have been watching it from his living room recliner. I imagine that my mother fed him and her brood of six, the oldest being eight years old, baked chicken for Sunday dinner.

Digging up my Certificate of Baptism did revive a clear memory of Mom. I was less than a month old when she bundled me up and carried me into St. Rose of Lima to be baptized. Fast forward 30 years to 1985, when Mary was nursing a two-week-old Kate and we were all in need of fresh air. This is before we had cell phones, and we returned from pizza and a stroll at White Marsh Mall to a half-dozen messages, increasingly frantic, from Mom. I returned her call and explained that no, we were not at the hospital, that all was well. Her patience shot, Mom responded with an invective that I had never previously heard her apply to one of her children.

Thanks for the memories, Father Rey.