Do you know Pedro Arrupe? He was a Spanish Jesuit, and he served as the 28th Superior General of the Society of Jesus. When the atomic bomb fell in Hiroshima, Father Arrupe was in Japan, and he helped some of the victims.

If you’ve never heard of him, you might want to learn a little more about him because the Vatican just opened the cause for his sainthood.

Father Arrupe’s leadership had a powerful impact on the Society of Jesus. He said, “Only by being a man or woman for others does one become fully human.”

But he’s perhaps best known for these words, which I love so much:

Nothing is more practical than

in a quite absolute, final way.

What you are in love with,

what seizes your imagination, will affect everything.

what will get you out of bed in the morning,

what you do with your evenings,

how you spend your weekends,

what you read, whom you know,

what breaks your heart,

and what amazes you with joy and gratitude.

Fall in Love, stay in love,

and it will decide everything. 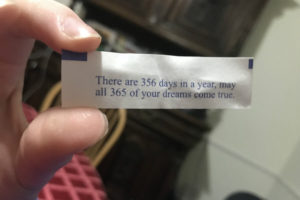 I hope your Year of the Pig started happily and with a fortune better than the one that my nieces and nephews found in their bag of Chinese food.

Let’s hope we have more than 356 days in the year and that some of those dreams do come true. 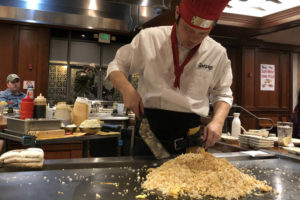 We have so many different plans for how to celebrate the Chinese New Year that I sort of forgot about the actual first day of the Year of the Pig. Halfway through the day I realized that I was planning to serve leftover chicken marsala for dinner. That just didn’t seem right.

So we took the boys out for hibachi instead. I thought the hibachi place would be packed with people celebrating the Lunar New Year, so I called to make reservations. When we arrived, the restaurant was practically empty.

It was just the right way to mark the celebrations. 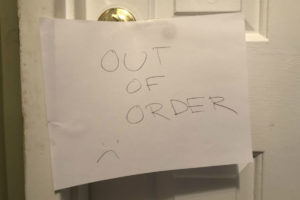 The real beginning of the Year of the Pig happened that morning when our 11-year-old woke me up to tell me he had just shut off the water in the bathroom because the toilet looked as it were about to overflow. Not every fifth grader knows how to cut off the water line, but this one happens to be the grandson of a master plumber.

I tried to convince the boys that it was good luck to have plumbing issues on the first day of Chinese New Year, but they didn’t believe me. But I do feel lucky to have a fifth grader with some knowledge of household plumbing.

’Tis the season for red envelopes, which are traditionally full of lucky money for the New Year. We did give our sons a little cash in theirs, but we also filled a few with Starbucks gift cards for teacher and sitter gifts and a few friends. There’s nothing like giving someone an unexpected red envelope for the Year of the Pig.

We have a few more to fill for other children in our life, and I still have to decide what we’re putting inside. 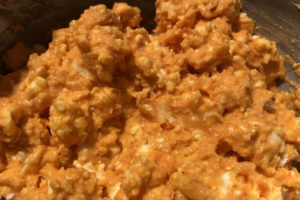 I’ve been trying to replicate the fiery feta dip that one of our favorite restaurants, Dimitri’s, serves. I tried one recipe that I liked, but my resident fiery feta dip fan assured me was not at all similar.

Then I went to meet with my prayer group this week, and the hostess served a bowl of fiery feta dip. It tasted so much like Dimitri’s recipe to me. She mixes feta cheese with sriracha, lemon juice, paprika, and a little mayonnaise. I made it for dinner, and it was close! I’ll keep refining it until we get it just right.

We serve it with cucumbers and pita wedges because that’s how Dimitri’s serves it, too. 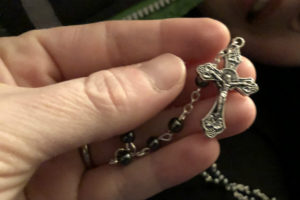 My husband’s sister Robin passed away last week after a battle with lung cancer. I’m in awe of the courage and grace and peace she showed in her final weeks. The viewing and funeral were Sunday, and I had found a sitter who would stay with our boys so I could go with my husband.

Then our younger son woke me up that morning and said he didn’t feel well. I wasn’t sure what to do.

At times like that you pray for clarity—and clarity came soon enough. He started vomiting. I knew then I couldn’t leave him with a sitter, and my husband would have to go alone to the services. I felt terrible—and still do—to miss honoring Robin and supporting my husband through the day.

I want so much to be everything I can to the people in my life, but there are times when I am simply not able. By late afternoon our little guy was feeling better, and he and I sat and prayed a Rosary together. It was all we could do. It had to be enough.

At Sunday morning Mass, the priest—a friend of mine—had mentioned the magis, a Latin term the Jesuits use to mean more or greater. The priest reminded us that magis doesn’t always mean more of the same. Sometimes it means something different.

I couldn’t see it at the time, but maybe that Rosary in the living room was our magis, our little extra gift to Robin and the family. It wasn’t what we had in mind. But it was different, and it was good.

Please keep Robin and everyone who loves her in your prayers.

Caption for featured image at the top: Jesuit Father Pedro Arrupe, superior general of the Jesuits from 1965 to 1983, is pictured in an undated photo. The sainthood cause was formally opened in Rome at the Basilica of St. John Lateran Feb. 5, 2019, the 28th anniversary of Father Arrupe‘s death. (CNS photo/courtesy Jesuits Global)