When I first met Colleen Duggan a few years ago at a gathering of Catholic women bloggers, I enjoyed speaking with her and learning more about her writing. So, earlier this year when she told me she had written a book, Good Enough Is Good Enough: Confessions of an Imperfect Catholic Mom, I was excited to read it—and then to talk with her about how the book came to life.We found time to talk earlier this week, and the time just flew by—just as the pages of her book did as I was pulled into her words. 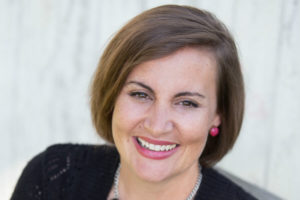 The idea for the book grew out of Colleen’s frustration at a lack of openness about the real challenges of parenting—particularly in some Catholic parenting circles.

“We want so much to be very good holy Catholics that we’re very guarded about the struggles we find in daily life,” she says. “We think we have to have all our I’s dotted and our T’s crossed, and I think social media does exacerbate that.”

As she reflected on her own faith journey as a wife and mother of six and how she has benefited from counseling and spiritual direction, Colleen was inspired to write her book, which was published this month.

“As I became more confident that God was in all this suffering that I was experiencing, I realized that other people could identify with that, as well,” she says. “I wanted this not to be salacious, where I aired all my dirty laundry, but also so people could see OK, that’s real, that’s a problem, and that they could identify with having pain in a different way.”

In Good Enough Is Good Enough, Colleen shares some of her challenges as a mother, viewing her experience through the lens of her Catholic faith in a relatable, open, and authentic way.

“Some people are almost intolerant of being honest about the struggles,” she says. “I realized that I’m not going to connect with every single person, and so I need to be more particular about where I seek my comfort and consolation from. We’re all broken…. And the messiness is where I usually find God, when I’m in pain.”

As Colleen worked on the book, her husband, children (who range from 4 to 14 years old), and family were supportive of her writing—and her sharing her family experiences. Every person mentioned in the book had the opportunity to read it and change it. 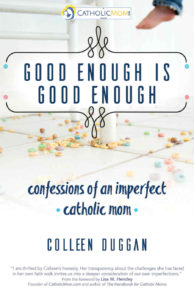 “It’s really funny because my husband and all of the people in my life are super private. I am an open book, but they are not. And I am so frank in the book about different things,” she says. But her husband supported her throughout her writing, even offering to get a hotel room for her to write so she could meet deadlines. “We had both been really dedicated to counseling and working on our marriage in a very concrete way, working on the issues that come up when you’ve been married for a long time.”

Although Colleen was concerned about putting herself out there with the book and feeling misunderstood, she tried to set that aside. “I was constantly surrendering all of that to God, thinking if this helps someone, helps someone to identify with it, helps someone grow closer to God and the sacraments, and finds healing, that would be my divine paycheck.”

And the initial responses to the book have been rewarding.

“Most people who have read the book have identified with some aspect of it,” she says. “That has been a consolation for me.”

Colleen and her family are parishioners at St. John’s in Westminster, Md.

Even though Colleen has written a book reflecting on her parenting, she does not consider herself an expert. She just wants to share some insights and create a more open conversation where there is room for admitting the ordinary challenges Catholic families encounter.

“I think about priests who tell people to be virtuous and do these things during confessions. And then they walk out of the confessional,” she says. “I’ve been wanting to ask them how to reconcile their own lack of virtue. They’re not all saints yet. And neither am I. But now I have a little bit of a forum to say these things.”