Happy New Year! Xin nian kwai le! Gung hay fat choy! The Year of the Pig, which begins today, comes every 12 years, so I’ve lived through a couple of them. But this is the first one I’ve celebrated.I can hardly remember a time when I didn’t celebrate the Chinese New Year. But the truth is that I never paid much attention to the holiday until we adopted our first child from China in 2009.

Now we start planning for Chinese New Year right after Christmas. If I’m being completely honest, we often start the conversations about the next year while dining during some of the festivities. It is then that we discuss the next year’s animal.

But sometimes we are really planning ahead. I texted my sister Maureen a few days ago to remind her that next year is her year, the Year of the Rat, and to let her know she may want to come to town for the festivities at the end of January. Not only is Maureen a Rat, but her daughter—who is not a Rat but a Goat—is a rat owner and enthusiast.

“Never too early,” Maureen wrote back.

She understands me, even though she’s a Rat and I’m a Dragon.

For Chinese New Year, we don’t have just one celebration. We extend Chinese New Year for weeks, getting together with friends and family, distributing red envelopes to friends, and eating enough Chinese food to last us until the next Year of the Pig. 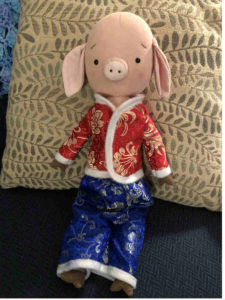 This year is special because our older son is a Pig. I couldn’t resist ordering him this beautiful stuffed pig, hand-made by a talented woman in Hunan Province. It arrived today, and we are all smitten. I don’t often order such a special keepsake, but it is our Pig’s year. He ought to have a special something to remember his first full Year of the Pig.

It’s a great joy to be a mother to a Pig—and his younger brother the Ox, too, of course. But this is the Year of the Pig. In my research, I learned that Pigs are good friends who tend to have excellent manners. They can sometimes be too trusting and impulsive—not our Pig, of course, but some Pigs. Pigs are honest, optimistic, realistic, and kind. They can be materialistic and are often enthusiastic. You are a Pig if you were born in 1935, 1947, 1959, 1971, 1983, 1995, or 2007.

Last night I told my husband that I think his mother is a Pig. It’s a good thing his mind is also on Chinese New Year. That might not have gone over well.

Whether you are a Pig or one of the other animals on the Chinese zodiac—and you must be one of the 12—I hope this is a year of great fortune for you and your family. And I hope you’ll enjoy a dumpling or some long-life noodles to celebrate.