As a young newspaper reporter in Southcentral Pennsylvania back in July 1999, I was assigned to go to a bookstore on a Friday night for a book release party. Harry Potter and the Prisoner of Azkaban was coming out, and dozens of children were expected to attend—in costume and full of excitement.I had heard of the Harry Potter books, but I hadn’t read one. Still, I knew there was no way I could interview the avid Harry Potter fans who were coming to the party unless I skimmed one of these books. I had to know some characters’ names and the general plot.

You do what you have to do.

So I tracked down the first book and…wow. I loved it from the very beginning.

The night of the release party I talked with children who had written and illustrated their own sequels to the book, bringing their own theories and ideas to the story line, connecting with other children who shared their interest in the books. It was a fantastic evening, and I enjoyed their imaginations and their excitement.

There was no turning back. I bought the second book and then the third. My sister Treasa and I started reading the books aloud together, alternating chapters, promising not to read ahead. I don’t think I ever broke that promise. I’m sure she didn’t. But I wouldn’t have blamed her if she had.

The characters, the story, the Hogwarts culture all pull you in. But what was especially exciting was waiting with millions of other readers as we wondered what might happen in the next book. We would discuss and debate and analyze and guess as we sat on the edge of our seats, anticipating the next piece of the story. 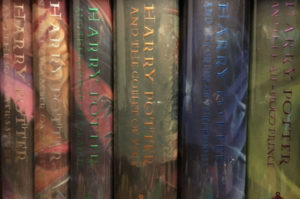 And I can remember where I was as each of the next books was released. The fifth book was released the day before my older-younger brother was married in Massachusetts and the sixth was released at midnight on my younger-younger brother’s wedding day in New Haven, Conn. So I had to wait until after the weddings were behind us to enjoy those installments.

I would say, “Of course I didn’t complain,” but let’s be honest. Even while joyfully celebrating the newlyweds, I might have grumbled a little.

Still, I did read the books soon enough, and they were everything I hoped they would be.

And now that I have children of my own, I realize I get to experience some of that magic all over again, as I will watch them step into the corridors of Hogwarts for the first time.