If I can put in my snow request for the season, I would like one good snowstorm—maybe six inches or so—and then we can head into spring. If our children get to put their requests in, however, they won’t have a full week of school between now and June. They want snow for snowballs and snowmen and snow angels and sledding and forts and every other kind of snow fun.

Last weekend we went to visit my in-laws on Maryland’s Eastern Shore. The Chesapeake Bay was iced over in places, and Grammy and Poppy had a few inches of snow. The boys had the best time playing in their yard. 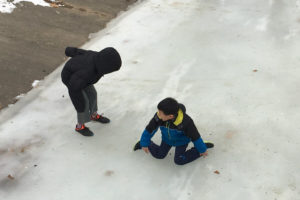 Then on Monday schools let out early because ice was coming, so I picked our boys up and we were headed to the car. They noticed that the stream by school was frozen solid, and they asked if they could slide on it. I couldn’t think of a reason not to—it’s shallow and it was as hard as concrete.

So I told them to go ahead and slide.

They loved it, especially because some of the parents were telling their children not to. I’m not sure whether that makes me a fun mom or a rebel mom or just a mom who tries to say yes when I can’t think of a reason to say no. 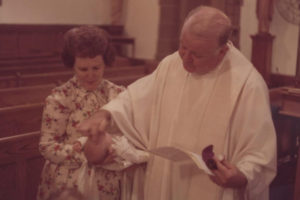 Monday was also the feast of the Baptism of Our Lord, and Kendra at Catholic All Year posted a photo on Facebook from her baptism in 1976. I was also baptized in 1976, and I knew I had the photos somewhere, thanks to my mother who dug them out years ago for me. (That’s my grandmother holding me.)

I was baptized in the chapel at Loyola University Maryland, where I work now. It just happened to be the location because my mother’s uncle was a Jesuit priest, so I was baptized by a Jesuit friend of his, Father William Driscoll, S.J., who was living at Loyola.

It’s amazing to me that I regularly spend time in the same chapel where I was baptized, especially since it wasn’t our family’s parish church. And it’s funny that I’m the only one of the six of us who was baptized there. 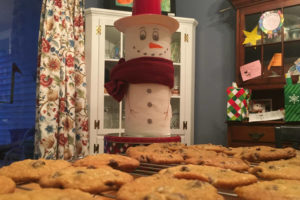 For weeks we have been wanting to give Christmas cookies to our neighbors. They dropped off cookies and banana coconut bread. I made them a paper towel snowman, and then I baked them cookies.

We walked the cookies over to their house, and they weren’t home. So we brought the cookies home and…well…they disappeared.

So I made another batch. We put them in a tin and took them over, and they weren’t home. So we brought those home and they suffered a similar fate.

Finally I made a third batch. We put them in a tin, and I walked them over. But no one answered the door. So I left them there. And my husband called them to tell them they were on the front step.

When I went to confession before Christmas—the day our second grader received his first reconciliation—I went face-to-face for the first time. It was different and felt a little strange, but it was good. In that confession, I told the priest something I was working on, and he said, “Let’s just take it a week at a time.” The idea of changing something just for a week was so empowering, and it has been really helpful for me.

It reminds me of the song, Put One Foot in Front of the Other from Santa Claus Is Coming to Town. 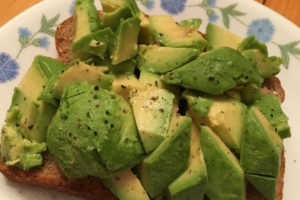 How are you doing with your New Year’s resolutions? I’m loving my word of the year, “Ask.” Our sons picked their words and saints of the year. Leo got “Liberate” and St. Gabriel, and Daniel has “Frolic” and St. Peregrine.

I was a little envious of “Frolic,” but of course that’s Daniel’s word and not mine.

I’m not sure how I’m doing with my goal to be more patient and understand and give people the benefit of the doubt, but I am doing well with at achieving my goal to have avocado toast more often for breakfast. 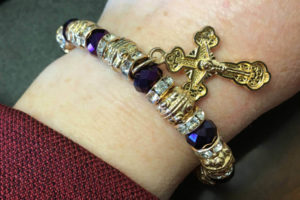 We exchange Christmas gifts with our good friends we met on our adoption trip to Leo, and their box arrived this week.

The boys could not wait to jump in and open everything, so they did this with some help from their after-school sitter.

When I came home, Daniel came running to give me a bag just for me. Inside was this beautiful rosary bracelet that my friend Cherie had asked a friend to make for me. I absolutely love it.