At the end of each school day, you might think that our children happily share every detail about recess, math class, lunch, what their teachers told them, and how many friends they made. But mothers have to be good detectives to find out what’s going on.

As our children started a new school this week, I have been on high alert, asking many questions to try to figure out how the transition was going. I can’t be sure of anything, but after a little bit of a bumpy beginning, they both seem to be doing just fine. 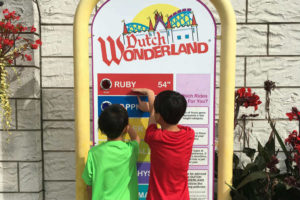 We made the most of our Brothers’ Day celebration last Friday. A friend gave us tickets to Dutch Wonderland, so we drove to Lancaster and the boys proved to me that they just keep growing taller.

Our younger son—the one who used to be afraid of swings and the Penny Pony at the grocery store—talked his brother into joining him on the Kingdom Coaster, the roller coaster there, twice.

Then we stopped at a mini-golf place in York County, Cones and Clubs, and golfed our way through the 24 holes. It was a fantastic day for both the brothers and their mother.

I realized this week that soccer games and practices are going to be the most social part of my week, as I hang out with some of my favorite mom friends on the sidelines. I was almost sorry to see soccer practice end one evening this week, though we could hardly feel our feet as we shivered in the cold. Still, what if it turns out that I become a huge fan of soccer and never again complain about soccer season?

Of course, I should confess that I was practically doing cartwheels when I learned that one of our boys had no game this weekend. So maybe I’m not that big a soccer fan.

This week I got my hair cut. It’s shorter, but still fairly long enough. When I asked Daniel how he liked it, he sort of grimaced and said, “I like you better when you have long hair.” 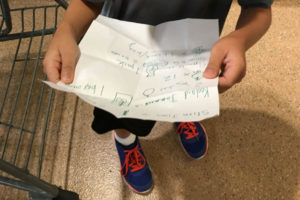 When Daniel and I went grocery shopping the other day, he took part of the list and filled his own cart. It’s amazing to me how quickly our children are growing. 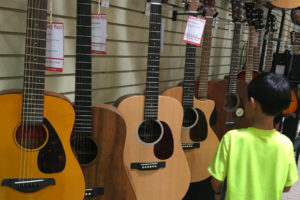 Leo is going to learn to play the trumpet this year in school. We went to a music store to rent him a trumpet, and Daniel walked around the store trying to decide which instrument he wanted to play.

The store also had pictures of Pokemon hidden throughout the store, so we knew we were in the right place.

They were also selling guitar strings, and my husband told us he had once worked for the company that makes them—and had helped name the strings. I had no idea. It turns out that you can be married to someone for 13 years and still not know all about him.

You can find more quick takes at Kelly’s blog, This Ain’t the Lyceum. As we watch Hurricane Irma moving in, please join me in praying for all those still dealing with the effects of Hurricane Harvey and those who are dealing with Irma.