Over the past week, whenever we have passed the Fairgrounds in Timonium, Md., the Ferris wheel has been beckoning to our younger son. He has been talking about riding it, and I have listened, but I didn’t actually think it would happen.So I wasn’t really thinking of it when we walked into the Maryland State Fair. But he led us straight to the Ferris wheel—the giant one that stands overlooking the whole fair—and sold his big brother on the idea. Even though I distracted the boys with games and other rides, they kept guiding me back to the Ferris wheel.

Now I would like to believe I would take on a rabid shark for my children. I am sure I would run across flaming coals or wrestle a bear or help with the most dreadful summer reading project. But I am not an amusement park person. I stood there looking up at the tallest ride I had ever seen, and I knew there was no way I could get on that Ferris wheel with them.

So I gave them detailed instructions on what to do and not to do while they were riding. I made sure both of them really wanted to go through with this ride. And, on an impulse, I gave our older son my camera to take along. If he had a job, I knew he would stay focused and not be frightened. 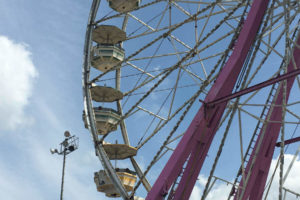 When they climbed aboard, they were as ready as they could be.

But I hadn’t considered how I would react. I was totally unprepared to see that Ferris wheel start to move.

As I stood on the ground and watched them go up, I was suddenly scared. God has entrusted my husband and me with raising these two amazing children, and I just put them on a ride that would take them far up into the sky. Could I really trust them to sit safely? Could I trust those young men who grinned at them and loaded them into the ride?

All I could do was turn to the One I do trust. I talked to God—and to Mary. I prayed for the ride to go well and for it to end so our boys could return to me safely.

And, of course, what felt like many years later, they did. They came running to me, wearing the biggest smiles, excited to show me the pictures they had taken on my camera. 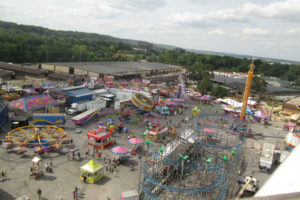 The photos are terrific. They also make me a little queasy because wow, that Ferris wheel is as tall as I thought it was—and maybe even taller.

It was hard to believe that, four or five years ago, one of these children was too scared to get on a swing.

“Next year,” Daniel said happily as we walked over toward the Cow Palace, “we will ride the Ferris wheel again. It can be a family tradition.”

Yikes. Well, that’s one family tradition I’ll have to experience from the ground.