This Christmas season as we were making paper towel snowmen and paper towel nativity figures to give as presents, I had an idea for a gift for a friend and her family. They are former pug owners, and pugs seemed to crop up quite a bit as we were counting down to Christmas this year. My friend and I had even jokingly discussed “Pugmas” at one point, and I couldn’t seem to shake the pug theme from my mind.I decided to create a pug family, and our boys immediately agreed it was the right gift. All we used were a few markers, paper towels, toilet paper, and my fabulous new hot glue gun. I had thought we might make a whole litter of puppies, but my sons thought the parents and child were just perfect.

So I stopped making pugs and wrote a poem. But how could we tie pugs to Christmas? It felt like a stretch. Because my head was full of Christmas carols, I wrote a poem that could be sung to “It Came Upon a Midnight Clear.”

They came upon a midnight clear,

Those glorious pugs of old,

Their faces squashed, their legs too short,

Yet somehow dear to hold.

The Star shone down on the stable where

And with the people who entered in

Were pugs who gathered to stay.

Close to the manger they waddled in

With snuffles and stumbles and pants.

The world in solemn stillness lay

As the pugs spilled the frankincense.

The pugs inching toward the Child,

Their mashed-in faces were quite out of place,

But He looked at the pugs and smiled.

And so the donkey was there and cow,

And sheep who were gathered galore,

And birds and camels and little lambs,

But somehow lost from lore,

Are pugs, who crept in on legs so short

And may have looked out of place,

But they were there, angels that they are,

Though no wings…instead a pug face. 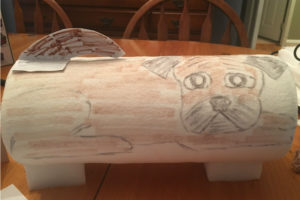 Our older son even found styrofoam pieces to put underneath the one pug that was on its side. I am not sure that paper towels lend themselves well to pugs, but our friends seemed to enjoy their gift, apparently sang the song with gusto, and I am sure they will make use of the towels, if they haven’t already.

Of course, we don’t know that pugs came to the manger, but I suppose there’s always a chance that the magi from the East brought a pug along for the journey.

And, as my niece Elise tells me, all creatures great and small came to see the Infant Jesus. So it’s possible there were pugs. And, if not, well, at least we can celebrate pugs and have a little fun doing it.