For years, I despised olives. I could not understand why they were often on pizza and salads and appetizer trays. Then one day not long ago, olives were placed directly in front of me, and I tried one. It wasn’t bad. It was surprisingly delicious.

Now I eat olives regularly, and I’m astonished to discover that they are quite good. I’ve even found my way to artichokes, which I always wanted to like but never could.

Our pediatrician once told our children that you need to try a new food 16 or 17 times before you can decide that you don’t like it. Maybe I finally tried olives enough to discover my affection for them?

Or maybe my taste buds are changing in my old age. 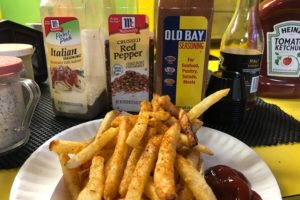 You know you’re in Baltimore when you go to the snack bar at the roller-skating rink and there’s a shaker of Old Bay sitting next to the ketchup.

Old Bay might be better on fries than it is on crabs.

And that’s saying something.

The other day my friend Annie was chatting with her mother when her mom mentioned that one of the Three Kings is depicted with a goiter—an enlarged thyroid.

Annie was surprised that her mom—who is Jewish—had this level of insider knowledge into the Nativity. Her mom told her to look it up. And then she said, “Wait, don’t bother. Just ask Rita.”

I love this because I am a huge fan of Annie and her mom, even though I’ve never actually met Annie’s mother. Still, I had to confess to Annie that I had no idea what she was talking about. But fortunately Google came through for me, and I found this NPR story about artistic depictions of the shepherds.

The real credit for this nugget of information, though, goes to Annie’s Mom. 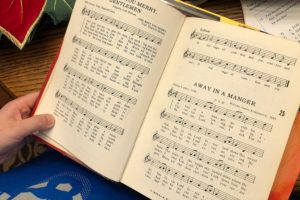 Every now and then our boys ask me to photograph a page of the hymnal at church so they can play a song on their trumpets later.

I happened to mention it to my parents, and my mother found an old hymnal at home and loaned it to us.

They are excited. And soon I’ll probably know every verse to “God Rest Ye Merry Gentlemen.”

Nothing gives you an adrenaline rush like an email from your son’s band teacher telling you that you have 30 minutes to get his trumpet to school or he’s going to miss his lesson for the week. For the record, I made it—and with four minutes to spare. 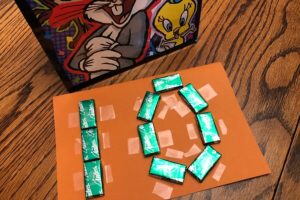 I always plan to buy birthday cards in advance for parties, but sometimes we are so focused on the gift, I forget about the card.

Last weekend we were heading to a party, and I realized we had no card. So, I took some candy and a piece of paper, and we made our own.

Maybe at some age, we won’t be able to make cards this way. But who doesn’t want a candy card? 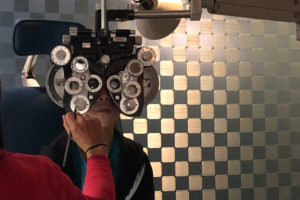 By the end of the day on Thursday, I was feeling relieved that we were almost to the end of the week. Then, on the way home from work, I ended up with a flat tire. I managed to get the van to a mechanic and borrowed a car from my father.

The next day one of our boys had an eye appointment that seemed to take ages, and then—just when I thought we were through the most challenging parts of the day—I got a call from school that his brother was sick. We hurried to get him.

It was crazy and exhausting, but it all worked out. I made it everywhere I needed to be. Our son who was sick should be fine. The flat tire just required a patch. And we made it to the weekend after all.

It really is a wonderful life.

Read more quick takes on Kelly’s blog, This Ain’t the Lyceum, and have a great weekend!