In the excitement about getting pet birds, I have failed to acknowledge another significant change for our family. We got a grill.

In almost 16 years of marriage, John and I have never owned a grill. We have talked about getting one. We have even shown up at my sister and brother-in-law’s house with food we wanted to grill on their grill. But we have never actually purchased our own.

Pandemic times call for big decisions, especially around food preparation. So, the same day we bought the bird cage, we bought a grill.

It is transformative. Suddenly someone else is planning meals and cooking. I could definitely get used to this.

Our cousin and nephew graduated from fifth grade in New York this week. When we saw that his school was having a car parade for him, we decorated a poster for our car and posed for photos to send to him. It was so much fun. 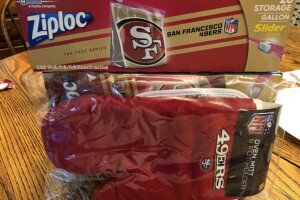 I was feeling a little guilty about not giving my parents a gift for their 49th anniversary, so I went to do some research online. Apparently, the modern gift for 49 years of marriage is a luxury gift. Nothing came to mind until I thought of the San Francisco 49ers.

I considered 49ers face masks for a while, and then I decided I should find something that would be less of a conversation starter for two non-49ers fans walking through their neighborhood.

Instead, I ordered 49ers potholders and disposable freezer bags. Can anyone ever have enough freezer bags?

When I dropped off my parents’ anniversary gift at their house, they gave me a pile of newspaper for birdcage liner. I came home and dropped the pile of newspapers on the table, went to do something else, and came back to find our boys looking through the Wall Street Journal.

Soon enough I was explaining the stock market and answering questions about current events.

I’m wondering whether I should get a newspaper subscription as part of our summer vacation.

Having newspaper lining their cage is clearly making the birds smarter. On their first day with newspaper instead of plain white liner, one of the birds pulled a little paper plate of fruit the whole way into the cage and put it in the middle—all on his own.

I feel like I’ve become a bird person overnight. I’m just full of bird stories. Who knew these little creatures had so much personality? 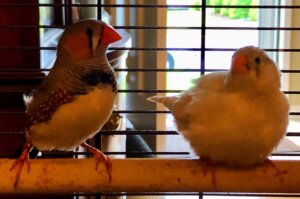 Oh, by the way, the birds and no longer named Fred and George. They’re now Hermione and Ron. When we were buying them, I asked whether they were the same gender, and the salesperson told me you had to do a blood test to figure that out.

That sounded legit and not like something I would want to attempt during a pandemic. Besides, they’re such tiny little things.

Within 24 hours of having the birds home, I had my suspicions that they weren’t the same gender. They just acted so…different from each other. The male one was just so masculine and so caring of the female. He always let her eat first and relax while he strutted around the cage, flipping his tail around.

I started googling zebra finches, and I found out that they are dimorphic. You can tell looking at them whether they are male or female! And ours are definitely a male and a female zebra finch. The female is the white one. 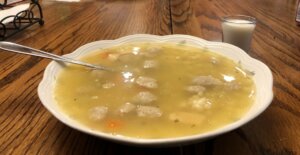 Sometimes I forget to give our 10-year-old a drink at dinner. It’s become sort of a joke between us. So, one night this week I poured him a glass of milk, but I used a shot glass.