IQALUIT, Nunavut (CNS) — On a stage designed to evoke a qammaq — a traditional Inuit summer home built of whale ribs, sod and stone — Pope Francis again apologized to the Indigenous communities of Canada for Catholics’ complicity in breaking up their families and suppressing their languages.

“I want to tell you how very sorry I am and to ask for forgiveness for the evil perpetrated by not a few Catholics” who ran the residential schools Indigenous children were forced to attend, Pope Francis said in the Canadian Arctic.

The stories told by survivors “not only cause us pain; they also create scandal,” the pope said July 29 in Iqaluit, Nunavut’s capital city.

After a flight from Quebec of just over three hours, Pope Francis was met at the Iqaluit airport by provincial and city officials, leaders of local Inuit organizations and Andre Tautu and Salome Kangok, two survivors of residential schools.

Then, going into the town, which has a population of 7,429, Pope Francis held a private meeting with more survivors at Nakasuk Elementary School. In the school gym, designed to evoke the warmth and comfort of an igloo, the pope witnessed the lighting of the qulliq — a seal-oil lamp.

Outside the school, the townspeople, Canadian church representatives and visitors gathered for a public event highlighting Inuit culture, particularly dancing and throat singing.

Holly Uvilluk and three other social workers she works with came with their families.

“It’s exciting,” she said, “but I almost cried when I was parking my car. I was thinking of my dad. He’s 73 and grew up in Igloolik and went to residential school.”

Many of the women were wearing amauti — a traditional fringed poncho with a pouch on the back for carrying a baby.

Addressing the gathering, Pope Francis said that listening to the survivors “renewed in me the indignation and shame that I have felt for months,” ever since survivors traveled to the Vatican in March and April to share their stories and request that Pope Francis visit Canada to apologize on their land.

At the Vatican in March, Pope Francis said, an elder had described traditional Indigenous families — households of grandparents, parents and children — as being like “springtime, when young birds chirp happily around their mother. But suddenly, he said, the singing stopped: Families were broken up, and the little ones were taken away far from home. Winter fell over everything.”

Iqaluit is on the border of the Arctic and subarctic polar climate zones, and ice and snow usually cover the ground from October through June.

As he did throughout his visit to Canada July 24-29, Pope Francis gave his speech in Spanish. In Iqaluit, there was consecutive translation in Inuktitut, a language that was suppressed in the residential schools.

“How evil it is to break the bonds uniting parents and children, to damage our closest relationships, to harm and scandalize the little ones,” the pope told the crowd gathered outside the school.

As he prepared to return to Rome on an overnight flight, Pope Francis told the crowd, “We are here with the desire to pursue together a journey of healing and reconciliation that, with the help of the Creator, can help us shed light on what happened and move beyond that dark past.”

The lighting of the qulliq, he said, “remains a beautiful symbol of life, of a luminous way of living that does not yield to the darkness of the night.”

Despite the ongoing, intergenerational trauma caused by the residential schools, the Inuit are recovering their language and many of their ancient ways, particularly what the pope described as “a beautiful relationship between you and this land you inhabit.”

The land, like the people, he said, “is strong and resilient, and responds with brilliant light to the darkness that enshrouds it for most of the year.”

At the same time, he said, the land, “like every individual and every people, is also fragile, and needs to be cared for,” a task that young Inuit are ready to accept and for which they can use the wisdom and guidance of the community’s elders.

Pope Francis urged the young Inuit to be courageous in working to make the world a better place.

Do not let yourself “get dragged down by those who would have you believe that it is better to think only of yourself and to use your time solely for your leisure and your interests,” he told them.

“You were made to fly, to embrace the courage of truth and the beauty of justice, to ‘elevate your moral temper, to be compassionate, to serve others and to build relationships,'” he continued, quoting “Inunnguiniq Iq,” the community’s guiding principles.

Pope Francis told the young Inuit that he knows what he is asking is not easy, but he urged them to “keep thinking of the arctic swallow that in Spanish we call a ‘charrán.’ It does not let head winds or sudden changes in temperature stop it from flying from one end of the earth to the other.”

“At times, it chooses alternate routes, accepts detours, adapts to certain winds,” he said, “but it always has a clear goal, and it always arrives at its destination.”

The Argentine pope, who once described himself as coming from the end of the earth, flew practically to the opposite end to ask forgiveness of the Inuit and to strengthen them in their faith.

Embrace the Gospel “preserved and handed down by your ancestors, and thus come to see the Inuk face of Jesus Christ,” he told them, leaving them with a “qujannamiik” or thank you. 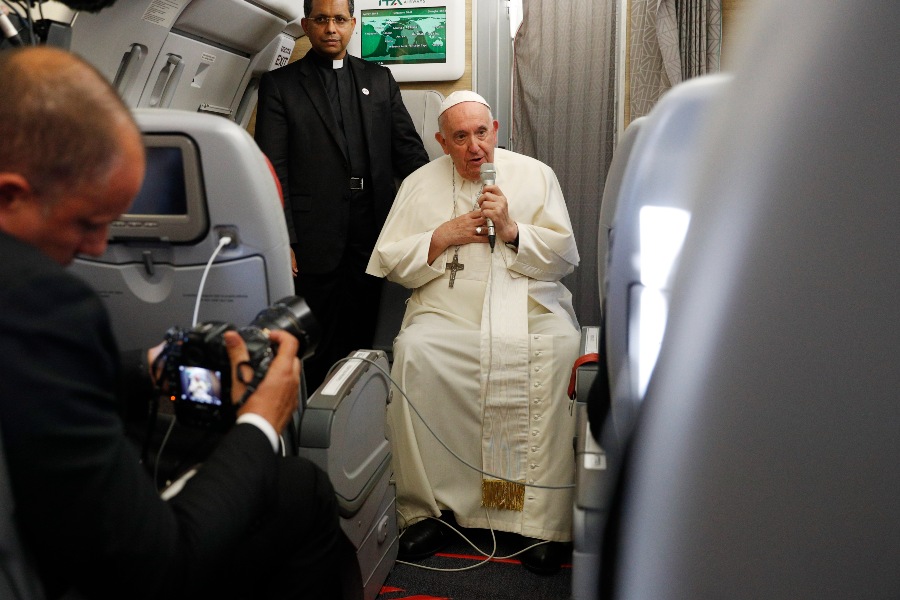