When I first met him, he was wearing overalls and a tattered white shirt and a smile that lit up his whole face. As I drove into the driveway of his Capuchin Friary in Wilmington, Del., Father Tom came walking over to meet me.He greeted me warmly and showed me around the grounds. I had come to stay for the weekend, searching a retreat from the chaos of life, needing an escape. I thought I would spend time alone and in prayer. But rather than spending the weekend in complete solitude, I ended up finding peace through a new friendship with this Capuchin priest.

His full name was Fr. Thomas Pietrantonio, OFM, Cap., but I’m not sure I learned his last name until a year later when I asked for it so I could send him a wedding invitation. To me, he was always Father Tom. I never told him why I had suddenly decided I needed to go on a weekend retreat, and he never asked. Somehow he didn’t need to know. We talked about smaller things and somehow they were the bigger things. Over the course of two days, I found the issues I had carried into the retreat didn’t matter all that much.

Fr. Tom was a calming presence that weekend, pointing out the beauty in nature, sharing a thought that gave me a glimpse into the depth of his faith, or simply—as he would say—checking out the inside of his eyelids.

I was struck with his spiritual approach to life. It seemed to me that everything he did, he approached with reverence and joy. 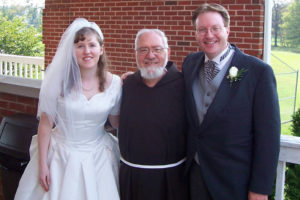 My husband and I were so honored when he said he would make the drive to our wedding to be there with us that day. When we were hoping and praying to become parents, Fr. Tom was full of patience and hope. He prayed with and for us and never doubted we would have children.

On one visit with him, we asked him to pray for a friend who was facing a tragic situation. He listened carefully and promised to pray. Then he said, “Isn’t it wonderful that we can do this for each other?”

I asked Fr. Tom once how he knew he wanted to be a priest, and he told me he was just a boy when he started hearing God calling him. He was simply watching a Franciscan opening the windows of a chapel, gently, carefully, prayerfully—and he knew he wanted to approach life that same way.

And he did. He seemed to bring love and care to the simplest, smallest action, whether he was doing his work in the friary on celebrating Mass in the chapel there. He seemed to see God’s fingerprints in nature and Jesus in the people he interacted with. He had the most amazing ability to listen and truly hear what you were telling him.

Fr. Tom died 10 years ago this month—just a few months before we started our adoption journey that took us twice to the other side of the world to China to meet our sons. But I feel certain that he would enjoy getting to know our sons. And I often turn to him, asking for his intercession. I always think of how well he listened and how much he believed in the power of prayer.

This post is being shared simultaneously on St. Dymphna’s Daughter, where bloggers are sharing stories of #HolyPeople they have encountered.