Back in December 2009, I was standing in the lobby of the U.S. Consolate in Guangzhou, China, with friends who had just become parents through the miracle of adoption. We were chatting, sharing stories from the first days with our children, talking about how we were longing to go home.John and I had just adopted our older son, and we were amazed by everything our little 2-year-old did. He was our entire focus, our whole world.

As we were standing there, though, I had a sudden thought that seemed to come out of nowhere.

“I wonder,” I said aloud, “whether our second child has already been born and is living in China.”

The parents around me laughed—and I found myself laughing, too. It was a strange thought when most of us still weren’t getting much sleep, when we had been in China for almost two weeks, and when our worlds were revolving around the new children in our arms.

But I couldn’t quite shake that idea. And I tend to believe that thoughts like that don’t come from within ourselves. Sometimes they are a nudge or a prompting from the Holy Spirit.

More than a year later, when we were matched with our younger son, we looked at his file and realized he had, in fact, already been born when I had that thought. He was living in that province, maybe an hour away from that building I was standing in.

From the moment we saw his face in photos, we couldn’t wait to meet him.

Traveling to China for the second time was like a homecoming. On our first trip, we were anxious about the traveling and becoming parents. On our second trip, we couldn’t wait to reconnect with store owners in Guangzhou. We wanted to be more adventurous in our exploring and even travel to our son’s hometown.

Mostly, though, we were so, so ready to meet our little boy. 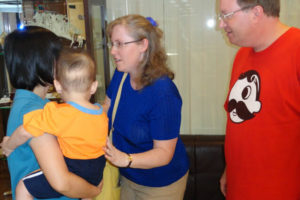 Seven years ago today, John and I walked into a government office in Guangzhou. It was full of sunlight, and photos of happy families decorated the walls. We spotted our son off in a little room to the side, waiting to meet us, and minutes later he was in our arms.

Even when you are prepared—even when you have been imagining meeting your child for almost two years—there is nothing like holding your child for the first time. I wanted to take in every detail of this little boy—his warmth, his lips, his little plastic shoes, his wispy hair, and the way he leaned into us, longing for comfort in the midst of the confusion.

I didn’t even realize I was crying at first, but of course I was—crying with sadness, crying with happiness, crying with all the emotions that lead up to this moment, crying because we could not explain in words to our beautiful 20-month-old son what was happening.

Our first night together he called us “Mama” and “Baba.” From then on, every day brought new discoveries about his personality. Like a flower opening, he would let us in bit by bit. That was at first. Then it was more swimming in a waterfall—he was just so full of personality and giggles and a sense of fun. And he still is.

Much of what we discovered in those first days is still true today. He’s a delightful child with a mischievous side and a sense of humor that still catches me off guard.

He’s a boy who knows what he wants and asks for it (tonight he told me he’s asking Santa for a phone and a Nintendo Switch), but he’s also easily content and almost always willing to compromise with his brother. 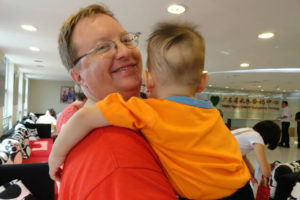 Sometimes I’ll ask him whether he likes something and he’ll say, “I don’t like it. I love it.”

That’s our boy. That’s how he approaches the world, with compassion and joy.

Last night as we were getting ready for bed, I said, “I think I’ll write about your Gotcha Day.”

I didn’t write 1,000 words, but I’m including pictures, so maybe that counts. But I’m pretty sure I’ve already won the top-top award. I get to be John’s wife and the mother of these two incredible children. And tonight the toddler we held for the first time seven years ago gets to choose how he’ll be celebrated.