It all started Saturday morning as Daniel and I were driving to his First Communion Workshop.“It’s going to be so boring,” he said. “We’re just going to sit there and listen to people talk to us.”

He was remembering the First Reconciliation Workshop last fall. But after that workshop I gave feedback asking for more interactive programs in the future. I requested a snack for the kids, even if I had to provide it myself. I suggested including activities that would get the kids out of their chairs. I asked that the planners keep in mind that not all second graders are great, quick readers or people who like to sit in their chairs for three hours.

I gave all my feedback nicely, and I knew I had been heard.

“I really think it’s going to be fun,” I told our second grader. “So let’s just see.”

We walked into the gym where everyone else was already gathered, and we realized they were starting an activity: a rock, paper, scissors tournament.

Daniel jumped right in, battling and defeating a friend. His friend became his cheering section, and he headed off to take on a new opponent. Each time a child won, the others around them became their group of supportive friends.

Within minutes, I was trailing a group of dozens of children and parents who were cheering and chanting my son’s name. I could barely keep track of him in the crowd.

The next thing I knew he was the champion, making a victory lap around the room as we tried to find each other. When we did, he was beaming.

Neither one of us could believe it.

We still had the whole First Communion Workshop ahead of us. And it was beautifully done, geared toward the children, and everything I could have hoped for.

As we were driving home, we talked about how a host tastes, what we learned about Mass, and how much fun it was to make a banner to hang on the end of the pew. And, of course, we talked about what it felt like to be the champion of a massive rock, paper, scissors tournament.

He wouldn’t tell me his secret, but I could tell he felt special and celebrated. 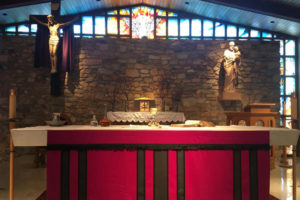 I think the tournament was just an ice breaker for the children—a chance for them to come together and learn to cheer for someone they might not even know.

But as I remember watching our son lead a pack of cheering friends and acquaintances and strangers around a large gym, I find myself thinking of how much Jesus loves each of us. As we come to meet Him in the Eucharist, He’s cheering us on, wanting us to grow in a special relationship with Him. He’s with us the whole way, supporting us and calling our name.

And now that I’ve seen my son’s face all lit up from winning a rock, paper, scissors tournament, I can’t wait to see him after he receives Jesus in the Eucharist for the first time.