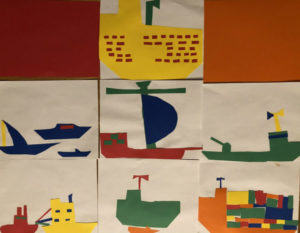 It has been cold this week, though not as cold as it has been in some parts of the country. I couldn’t make outdoor play possible every day, but we did have scissors and colored paper. And that’s just what our 9-year-old wanted.

He cut the paper into pieces and started making his own pictures with them.

“Those almost look like mosaics!” I said. “Did you learn that in art?”

He didn’t know about mosaics. He just thought it would be fun. And it was. Now we have all these beautiful boats.

By the end of the week, it’s hard to think of anything to make for dinner. So Friday morning we decided we were just going to have spaghetti. It seemed like a great idea to use what we had in the house.

I texted my husband late in the afternoon when I realized we didn’t have parmesan cheese. I thought maybe he could stop for some on his way home and get some garlic bread, too.

He called from the grocery store to see if we needed anything else. “Maybe eggs?” I said.

Two minutes later I called him back.

“Um…actually…we need spaghetti. Could you get some?”

I really do have my act together sometimes. With all the snow delays and closings, though, it has been a hard week to stay organized. 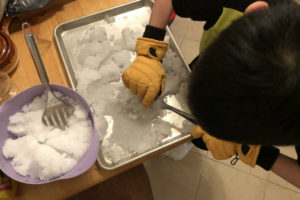 It was so cold outside that I did what I haven’t done in years. I brought the snow inside for a child to play with it. I took a cookie sheet, went outside to fill it with snow, and then brought it in and gave a few kitchen tools to a young person who had been saying, “I’m bored.”

He had a great time building things out of snow on the kitchen table while I made dinner.

It may not be as much fun as sledding, but it requires much less laundry. 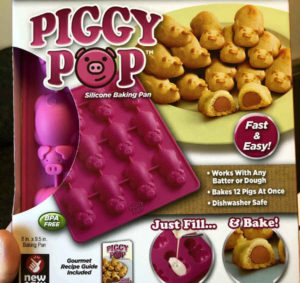 We’re still counting down to Chinese New Year here! The Year of the Pig starts Tuesday, Feb. 5, and we will be ready to celebrate it over the next few weeks.

It you are looking for ways to celebrate, I shared some here.

In the traditional Chinese way, we don’t just mark one day as Chinese New Year. We will party most of February. And we will celebrate the pig in a special way, especially since our older son is a pig himself.

One of my colleagues happened to spot this item for making Piggy Pops, and I am excited to try to make pig-shaped everything. Ice cubes? Little cakes? Pancakes for Chinese New Year morning? The options are limitless.

I love this story about how a painting posted on social media took off and connected people who didn’t know one another in a fun, creative way. 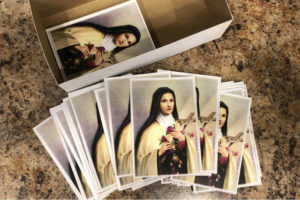 Last night my sister Treasa said to me, “Maybe you should open an Etsy shop and sell templates for your prayer cards.”

And I was thinking, “What is she talking about? My prayer cards? I just make prayer cards when someone needs one.”

Then I stopped to think. In the past five years, I have made prayer cards for prayer gatherings for expectant mothers and their babies, for my Sunday school students, for my brother-in-law who passed away….

So maybe it’s time for me to acknowledge that I do make prayer cards. Maybe not with the enthusiasm I bring to making thematically-shaped veggie trays, but I make them nonetheless. 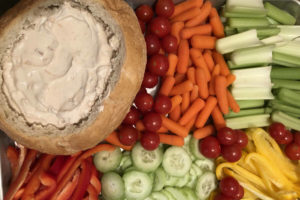 Speaking of veggie trays and knowing that Super Bowl Sunday is just hours away, my new favorite way to serve dip for a veggie tray is in a bread bowl. I don’t know how easy they are to find, but a new supermarket near us sells them. You buy a loaf, hollow it out, and fill it with dip.

After everyone has eaten the veggies and dip, you can eat the dip bowl itself. That might sound a big extravagant, but it seems totally appropriate on a day we celebrate pigskin or, even better, during the Year of the Pig.

Read more quick takes on Kelly’s blog, This Ain’t the Lyceum, and have a wonderful weekend.