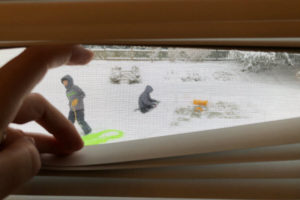 With snow last weekend and more expected this weekend, we are all in snow mode. Our boys are having an absolute blast playing in it—sledding and snowboarding on their sleds and building a fort and having snowball fights.

Snow is beautiful, especially for that first day when the world is a snow globe. I have nothing against snow as long as I don’t have to drive in it or worry about my loved ones driving in it. I’m an even bigger fan of it when I don’t have a stressful scramble to figure out child care because the children’s school is closed.

This year I have decided not to stress about school closings. Instead I will just assume the boys won’t have school. Then I’ll be surprised if school is open.

Do I sound very zen? Oh, I am. But the real reason may be that I have two sitters who live next door. 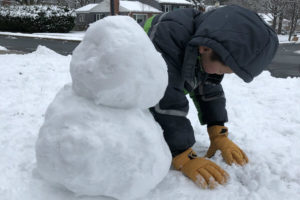 Our snow was perfect for snowman building, so our third grader made one for our front yard.

When he had two large snowballs stacked, he said to me, “We should put this in the car and drive it to the cemetery. We can put it at Georgie’s grave.”

It was a beautiful thought. But even though the cemetery isn’t far away, I couldn’t promise that the snowman would survive the trip.

Next time maybe we’ll try driving to the cemetery to build one there.

My first book of 2019 is an assignment from our fifth grader, who just finished The Mysterious Benedict Society. He has assigned me three chapters a day, and I’m sure you’ll be happy to hear that I am keeping up just fine. It’s a fun read. Every morning I update our son on my progress, and we discuss the book. He’s very careful not to spoil the story for me. 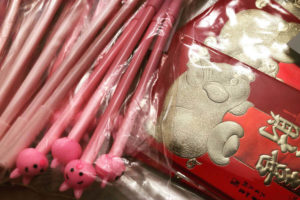 If your New Year’s resolutions have failed, you’ll be happy to hear that the Chinese New Year begins Feb. 5! You can have a whole new start. This year will be the Year of the Pig, which we are very excited about since our 11-year-old is a pig.

Every year we throw a Chinese New Year party, and I try to involve the children in deciding on the guest list and the party favors and the food. Every year I wonder whether they might decide it’s not that cool the next year, but so far, so good. Everyone is completely on board this year.

If you’re in the market for Chinese New Year items, you almost certainly want to check out Oriental Trading. But I also do a little hunting on Amazon, and that’s where I found beautiful red envelopes to mark the year and pig pens.

One of the Chinese New Year traditions is to clean your house for the new year. But maybe it’s OK in the Year of the Pig for the house to look like a pigpen? 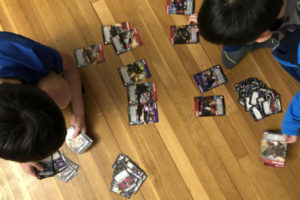 Our boys had a little Christmas money left to spend, and they had their hearts set on Transformers trading game cards. What’s that? You’ve never heard of them? Join the club. They weren’t easy to track down.

We had seen some at a bookstore, but when we went back, they were out of them—with no plans to re-order. We could order some ourselves, but we had to pay shipping, and it wasn’t cheap. The ones we found online only came in packs of dozens and dozens of cards that cost a fortune.

We went to another store and then still another before we found the cards. And they had exactly six packs, so the boys could each get three.

Our Transformers card collectors were thrilled. We stopped in the store aisle and prayed a prayer of thanks God right then and there.

There are bigger problems in the world and more significant miracles. But I know God cares about whatever matters to our children, and I want them to believe that, too.

Whenever it snows, I go into cooking mode. Last weekend I made pancakes and pot roast and apple crisp and tried making koobideh kabobs for the first time. Those turned out well enough that I am thinking of making them again this weekend. I’ll write about that if it goes well.

Snow usually makes people ravenous, but when I called to tell our boys that it was time for dinner, no one came.

“Is anyone hungry?” I called again.

“This pot roast is going to get cold.”

“No school tomorrow!” I yelled.

“YAAAAAAAAAY!” called out the children, coming thundering up the basement steps for dinner.

It’s good to know it was just a case of selective hearing and nothing against the pot roast.

Whenever I ask our younger son a question he doesn’t want to answer, he gets this impish look in his eye and says, “Whistle, whistle, whistle.”

Me: “Where did that bag of marshmallows go? It was right here on the table.”

It’s not very convincing—especially when we know who the marshmallow fan in the family is—but it is pretty cute. And I might occasionally forget to address the missing marshmallows because his little grin is just so charming.