With 12 full weeks between the end of one school year and the start of the next, we have a carefully woven tapestry of sitters and camps and time hanging at home with my husband and me.

This week included Bible Camp, and the boys had even more fun than they expected to—though I will admit their expectations going into the week were extremely low. It helped that they spent their afternoons with a sitter who’s a better pitcher and catcher than Mama. But then…who isn’t?

When my husband took a week off with the boys at the start of the summer, they opened bank accounts and launched rockets. Next week is my turn, and we have all kinds of plans. More than a few involve Pokemon. I can’t wait. I think the boys are excited, too.

Why do school and camp forms ask for the name of your children’s dentist? In what type of emergency situation would they call the dentist? Wouldn’t they just call 911 or a parent? Do dentists offer emergency advice on the phone? Why do I think it’s just a test to see if we have a dentist and can remember the name? And why do I always have to go look it up? 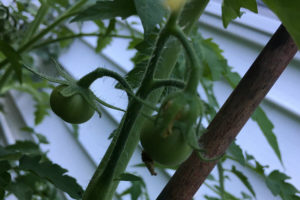 We have never really had a vegetable garden before, unless you count last year when we planted carrots and sunflowers to feed the bunnies and birds. This year, however, Daniel and my husband are growing tomatoes.

The first ones are on the vines, and we are excited to watch them grow and ripen. So far the backyard creatures are leaving them alone.

I hope we have some home-grown tomatoes to enjoy in a few weeks!

We just bought the game Simon, and everyone has been playing it over and over—well, everyone except me has been playing. But when I sat down the other night to try it for the first time in a few decades, I shattered the family record and set a new one. I might have gone even farther except that when my family realized I was having success, everyone started jumping in to help me.

With Simon, apparently, collaboration isn’t the path to success. But we are having fun with it. I’m not tired of the boop-beep-beep-boop yet. Check back with me in a week.

It’s summer. And we need to keep people on some kind of a schedule or things could fall apart. But, as our sons get a little older (7 and 9) and routine seems to be less important, I am doing terribly with this. Bedtime is happening around 9:30 or 10 or 10:15 or…well…whenever we finally tuck two giddy children into bed. 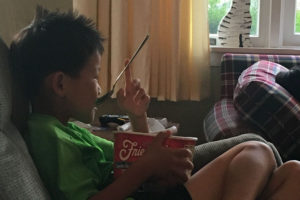 Because it’s summer, we haven’t discarded our old, tired, worn-out couch because it’s so great for kids who are guzzling juice boxes and popcorn and apple crushers. We’re all in some slow, relaxed mode at home. What will we be like by Labor Day?

The other night I looked over and saw Daniel watching TV and eating chocolate chip cookie dough ice cream straight out of the carton with an enormous spoon.

I am making mistakes all over the place, but if the goal is making sure these kids know these are slow, relaxing summer days? We’ve got that down. 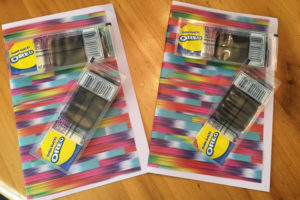 We had two 7-year-old birthday parties to attend last Saturday—one with laser tag and one with a piñata and lots of other outdoor games.

And I was struck, as I am so often, that it might be hard to be an introverted parent at this age, where the parents tend to stay at the parties and chat. I love it. I enjoy the conversations, meeting new parents, getting to know parents I’ve met a little better, working out details for future play dates, and on and on. But what if I weren’t on the extraverted end of the scale? Attending those parties could be much less fun or at least more exhausting.

Maybe it’s easier now that parents have phones with them and can have an urgent text to respond to, a pizza to order for dinner, or an Aerodactyl to catch on Pokemon Go.

Summer in Baltimore means snowballs. So Daniel and I went to the snowball stand the other night, even though the rest of our family was tired. I love one-on-one time with our boys.

“I want to try lemon and tiger’s blood,” he said.

And, in my crazy well-it’s-summer-vacation mode, I bought him both. It seemed a little wasteful, but you don’t get a snowball because it’s a great nutritional investment. You get it because it’s fun. And snowballs are cheap. So why not?

I sat and watched as he tasted his snowballs back and forth, trying to decide which one he liked more. In the end, he finished them both. He never decided which he liked better, though I noticed that whichever one he was eating was his favorite.

So now will I be buying two snowballs for him every time we go to the stand? Or will I just pick a random flavor knowing this child is almost always happy with his snowball? Tune in next week to find out.

Read more quick takes at Kelly’s blog, This Ain’t the Lyceum, and have a wonderful weekend. Happy Fourth!