Our not-so-little boy is discovering the wonders of the night sky. He’s always been interested in nature, but now he’s realizing just how much there is to see right overhead.He talks about stars and planets and light pollution, and I listen and smile. The stars may be millions of years old and light years away, but they’re all brand-new to this fourth grader—and they’re his very own discovery.

He takes his grandfather’s telescope out of its box and practices setting it up, getting ready for an evening with the stars. As dusk approaches, he monitors the clouds outside, worrying it won’t be clear enough for stargazing. He wants so much to see what he can find in the night sky.

As he marvels at the universe, I wonder at this child—so full of curiosity, a hunger for exploration, and an eagerness to learn and understand and know. I love his sense of wonder.

The other night he was outside with his father, scanning the heavens, when a shooting star streaked across the sky.

He came running into the house to tell me. He was a bundle of excitement, a young scientist who had made a startling and extraordinary discovery. We celebrated together as he described what it looked like. Then he ran back outside to soak in more of the chilly night air and the magnificent display up above.

A scientist might tell you that a shooting star is a meteor that burns up as it enters the earth’s atmosphere. That’s true. But I believe this bundle of dust and rocks was also a little gift from God to our son, sent sailing through the heavens just in time to make a 9-year-old’s evening. 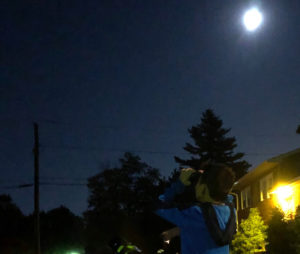 God is certainly in the awesome, expanding universe that’s larger than anyone can fully comprehend. God is in the vast sea of darkness full of tiny points of light that move and shift in ways poets and scientists have made sense of for generations.

But God is also the One who sends a shooting star sailing over the heads of a little boy and his father, as they stargaze on a chilly autumn night in their backyard.

God loves us each so very much. And He must send us a thousand tiny signs a day to show us. I hope you’ll spot one today and recognize it as a gift from Him.

Joining Theology Is a Verb and Reconciled to You for Worth Revisiting Wednesday.