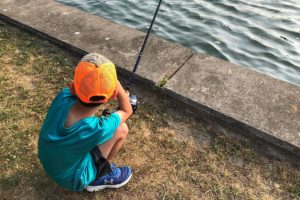 Once upon a time there was a boy who loved to fish. He dreamed about fishing. He talked about fishing. He couldn’t get enough of it—even though he had only caught one fish in three years.When his family decided to take a trip to Long Island, his father promised they could go fishing there. They packed the gear and researched fishing spots. Finally, on one beautiful sunny afternoon, they stopped at a bait and tackle shop to buy a container of clams and ask for advice. 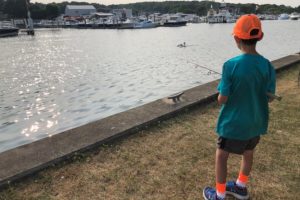 Go to the Shinnecock Canal, the man behind the counter told them. So, the 9-year-old fisherman and his big brother and his cousin and parents drove to the canal.

The water was still, stirred only by an occasional passing boat. The sun was sparkling on the surface of the water. A gentle breeze was blowing. The raw clams were slippery and gooey—not that anyone besides Dad would know since no one else would touch them.

The three children were overcome with excitement about the whole experience and all the fish they were going to catch. 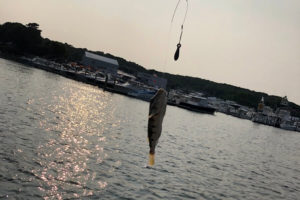 The grownups were just hoping to keep the three exuberant children from falling into the water.

And the fishing began. Much of what happened involved sitting and waiting and pulling in clumps of seaweed—sea bass as one fisherman calls it. There was also a fair amount of “Take three big steps back! You’re too close to the edge!” and “Everyone needs to be patient and take turns!”

But it was all about the fish, of course. 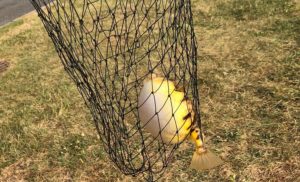 The boy who loves fishing caught the first fish, but it wriggled off his hook just as he pulled it out of the water.

Then he snagged a yellow pufferfish that filled the net like a little balloon.

Next his cousin pulled in another pufferfish—or was it the same one? Maybe yes, maybe no. No one was sure. It looked a little less yellow.

Then the boy caught a flat silver fish—a porgy, perhaps—pulling it out and admiring it before returning it to the water. 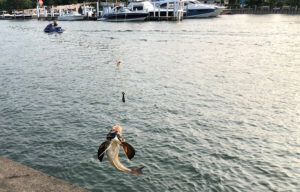 Then, just as the outing was almost done, his big brother caught a catfish, ugly and grumpy and wonderful.

The boys were happy to send each fish back to the water. They packed up the gear as the sun slid lower in the sky.

The three jolly fishermen went on their way, full of memories and stories of the day. The boys remembered how large the fish were, how much the creatures pulled their lines, how delicious they must have thought the clams were. 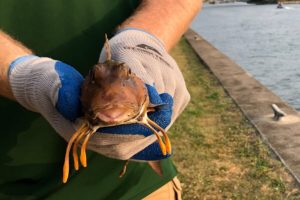 Everyone caught at least one fish. No one fell in. No one even dropped a fishing pole into the canal.

There were no fish for dinner, but no one complained. They stopped at an Italian restaurant on the way home and feasted on pasta and garlic bread.

The children talked on and on about the day.