How is it Halloween already? Here are five tricks-or-treats (you decide) as we head into this fun-filled holiday: 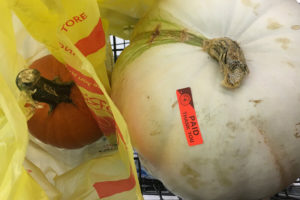 1. Buying pumpkins at the last minute. For more than a week my social media feed has been full of beautiful, smiling photos of children posing with pumpkins. Somehow our family never seems to manage to pick a pumpkin out of a field. We always find ours in a bin at a grocery store. Once or twice we’ve managed to get it from a slightly more rural bin, but never a field.

This year we never bought pumpkins when everyone else was getting theirs, so I had to make a frantic dash to get pumpkins on the day before Halloween. And I realized how much I love that. I got to pick from the dregs that are left, take them home, and see that everyone is perfectly happy with whatever I found.

2. Trying to be a fun aunt. As I was running around finding pumpkins, I realized maybe my sister Treasa could also use a pumpkin. She just welcomed twin boys a few weeks ago, so what were the chances she had a pumpkin? So I snagged a few for her family, even though they were not great pumpkins. They were more mediocre pumpkins. Actually, some of them might not even have been pumpkins. The little white ones were probably squashes of some sort.

But my nieces (3 and 1 ½) didn’t care. And I know the baby boys didn’t. They were both sleeping during my visit.

I felt like such a good aunt as I dropped my gift off. Then I realized that the Amazing Aunt Shai was there helping with the children—and would be every day this week since she has taken off from work just to help with the children. That’s why I will never win Aunt of the Year. But I’m happy to be Aunt Who Randomly Drops off Pumpkins and Occasionally Lunch. I think I’ve got that in the bag. 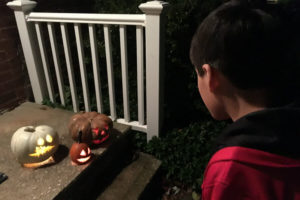 3. Making up our own contests. After our younger son and I carved our pumpkins, we asked his big brother to serve as our judge. He gave each of the three a prize—cutest, most like a real jack o’ lantern, and scariest. There’s no actual prize, of course, except the thrill of knowing that we have carved jack o’ lanterns on our porch. And what a prize that is.

4. Anticipating autumn leaves. I haven’t seen many colorful trees yet this season, but every now and then, I spot one that makes me pause. Maybe autumn will be a little late this year, and the vibrant leaves will be worth the wait. I’m looking forward to seeing what they look like in another week.

5. Easy Halloween costumes: This year has been the year of simple Halloween costumes. One child happily bought his off the rack at the store, and the other is insisting on wearing his rec council baseball uniform. One year someone is going to ask me for something complicated that involves actual work, and I will probably love it. But this year the hardest thing I have had to do was buy candy—oh, and track down pumpkins at the last minute. How can you top that?

Happy Halloween! I’m joining Ashley and others for Five Favorites this month.