When we first started celebrating the Chinese New Year, we put a plastic toy tiger on a cake, sliced the cake with a few cousins, and called it a party. 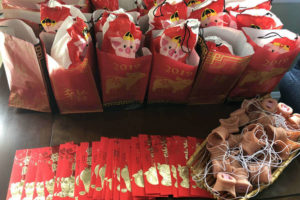 Gradually over the years we’ve added a few guests and a little more excitement. Somewhere along the way we started filling goody bags with treats, inviting more guests that reasonably fit in our home, and adding light saber battles to the event schedule.

Light saber battles are part of almost every event at our house. And, even though I take the lead on organizing our Chinese New Year celebrations, I always make sure that our boys are involved in the planning for our largest get together of the year. They definitely voice their opinions on how it should come together.

I always wish we could invite everyone we know—and maybe a few people we don’t. It’s just so much fun to get together, eat Chinese food, talk about who’s which animal on the Chinese zodiac, connect friends and family members who would never meet otherwise, and realize that if my husband weren’t co-hosting with me, no one would ever be offered anything to drink. 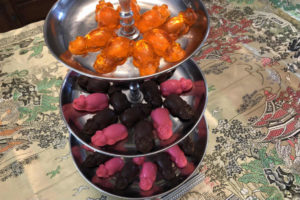 One of our favorite aspects of the party each year is honoring the animal of the year. I ordered pig noses, thinking guests might want to wear them around the house—which, oddly, did not catch on. But the pig was well-celebrated anyway, even though I believe the pig is often overlooked.

The only pig-themed items in the grocery store seemed to be pork rinds and meat-related items. You can buy crackers shaped like fish and cookies shaped like bears, but pig items seem to be…well…pieces of the pig itself. 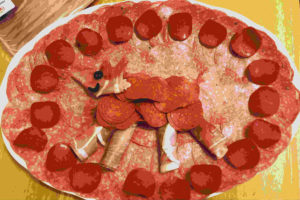 So, in honor of the Pig, I made a pig-themed tray of meats. I always include a few non-Chinese appetizers—veggies and dip and cheese and crackers. One of my friends made an amazing pigs-in-a-blanket pull-apart bread. Not only was it pig-themed, but it was also delicious.

Then we had chicken lo mein, pork fried rice, shrimp egg rolls, shrimp and chicken dumplings, and a shredded beef with green beans dish I discovered recently and thought would round the offerings out nicely.

When we were in China, we didn’t taste any desserts that we liked. But for Chinese New Year here, we always have a cake, so late Saturday night, I said—thinking I was talking to myself—“I guess I could try to make it in the shape of a pig, but should I really do that?” 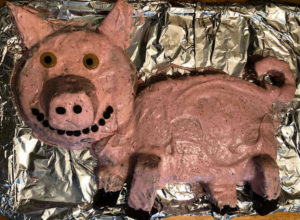 And my husband said, “Yes, it should be a pig.”

How do you make a pig cake? I can hear you asking yourself that question, especially in this Year of the Pig. I looked online, but none of the pig cakes I could find met with my vision—and I am not sure why I even had a vision at 10:30 on Saturday night, but I did. I take Chinese New Year fairly seriously.

I made one box of yellow cake mix in a 9 x 13 rectangular dish and a box of chocolate cake mix that I mixed and poured into a pie plate, a small circular Pyrex dish, and a loaf pan. I used the pie plate cake as the face and part of the smaller circle for the nose. The rectangular cake I trimmed for the body. Then I sliced the legs out of the loaf pan, made the ears and tail out of the extra trim for the body. 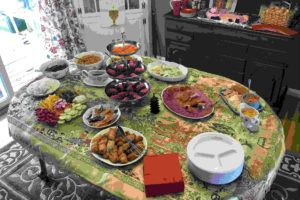 I had one can of white frosting, even though I thought I had bought two. But I had also bought strawberries, so I pureed them and mixed some of the puree into the white frosting. It was a beautiful pink color, and it was so runny that I just poured it over the cake. There was just barely enough, but it was fine. The pig—and everyone who ate him—smiled. I didn’t put any frosting on the hooves because they were already chocolate cake.

Then I used lemon lifesavers and chocolate chips for the facial features. And if someone doesn’t have enough lifesavers to give to his friends at school on Valentine’s Day, at least we can be grateful that they looked so good as our pig’s eyes. 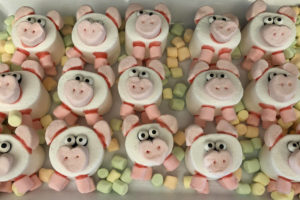 One of our guests arrived with pigs made out of marshmallows. They were adorable and sweet in every way. The children were almost as excited about them as I was.

“How did she know that that was just the right thing to bring?” I said to one of the boys later. “She had never even been to one of our parties before!” 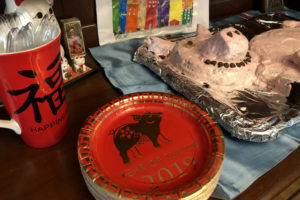 If we had planned things ahead a little more fully, we might have put Babe or Charlotte’s Web on TV, but my sons had really wanted to keep it a screen-free party. That kind of request comes around about as often as the Year of the Pig itself, so I tried to honor it.

Our boys had also planned some great games, but everyone was having so much fun running around outside and trading Pokemon cards and playing Star Realms that we never got to the Chopstick Challenge or the red envelope game. Maybe next year.

Because, you know, there’s always next year—the Year of the Rat. Let the countdown begin.