You might think we just breezed into the advance screening of Detective Pikachu earlier this week. But you know there’s always a back story.

Leo and I made great time getting to Arundel Mills—even though we were interrupted by a family of geese crossing the highway. When we went to the ticket office, the employee there sent us to get in a long line. Finally a lady with a clipboard arrived, so we knew she was official.

“You can get on the list,” she said, “but I’ve told everyone ahead of you the theater is already full.”

“Do you have your email confirmation?” she said.

“Well, no. I have a text from my editor saying we’re all set to go.” 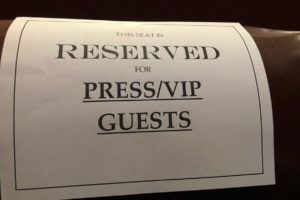 She wasn’t impressed. She sent me to talk to another lady with another list. And it was on that third and final list that we found our names. That was the only list that mattered. We were in luck.

“But there are only two seats left in the press section,” she said. “It’s theater 14. You’d better run!”

So run we did. I’m not sure Pikachu himself could have flown through the hallway as quickly to get to Matt, who checked my bag and sent us in, where they stylishly marked our hands with marker, and sent us to the two last press seats.

It was all very exciting.

When we got home, we told Daniel about our trip. He looked at the sign.

“Are you a VIP?” he said. I could hear the doubt in his voice.

I thought of the line and the lists we weren’t on and sprinting for the last seats in the theater.

Today is my sister Treasa’s birthday! Happy birthday to Treasa! She’s the sixth of six children in our family, and so you will understand why we have to make a big fuss over her.

I’ll drop by her house today with a gift, even though I’m fairly sure my siblings and I say we don’t exchange gifts. And I will sing to her and send her funny cow cartoons or Fred Astaire videos and text her again and again. I’m sure that’s just what she wants for her birthday.

It is also our older son’s half-birthday, which is worth a half of a celebration on its own, but we have nothing special planned. No worries. Half-hearted half-birthday celebrations have their own charm. 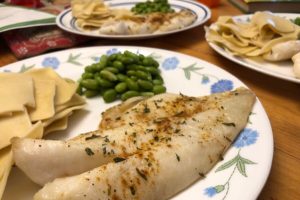 My husband was working late last night, so I stopped at the store and bought fresh fish for the rest of us to have for dinner. The boys and I love fish. My husband doesn’t love it quite as much. I bought much more than I thought we needed, and the boys ate and ate and ate. I love that they love fish. Then we had noodles and edamame with watermelon for a second course.

When my husband came home, he said, “It smells like fish in here.” And it did. 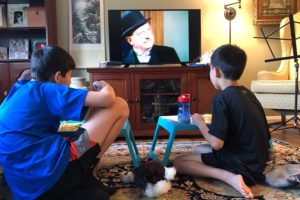 Our fish dinner was very fancy, and especially fancy because I let our sons eat in front of the TV.

Eating in front of the TV seems like an extremely decadent way to spend an evening. But I think it’s important to do something frivolous now and then, especially on a Thursday night in one of those 11-day weeks that seems unlikely to end.

The boys are currently fans of “Dad’s Army,” an old BBC show on Netflix. So we watched that and ate and laughed. 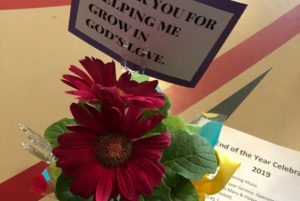 Faith formation is over for the year. Each of the teachers—or small group leaders, as we are called—received a potted plant with a little sign that says, “Thank you for helping me grow in God’s love.”

It’s such a beautiful, sweet sentiment. I found myself thinking of all the people who help me grow in God’s love, including my students, but also my co-small group leader and my own children and my husband and even people I hardly know that I encounter during the day.

Who is helping you grow in God’s love? 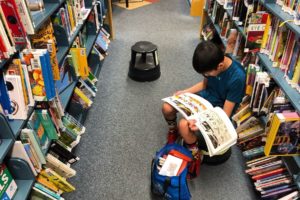 Last Saturday was Free Comic Book Day, and we went to two comic book stores and the library to celebrate. We came home with just a few comics, though my husband treated me to a Mother Teresa comic I remember from my childhood.

At the library I introduced Leo to Calvin and Hobbes, which I have been wanting to do. I am hoping our sons enjoy those as much as I did—though I haven’t hit on many books that I liked that they have liked, too. But I do keep trying.

Mother’s Day is this weekend, so we will probably eat something I didn’t cook, buy a hanging basket for our porch, and just spend time together. I’m looking forward to it.

I wrote this piece about the Blessed Mother because my earthly mother wouldn’t want to be in the spotlight, but I’m sure Mary doesn’t mind.

This Mother’s Day, maybe you would join me in praying for all those for whom Mother’s Day is a difficult day.

Read more quick takes at Kelly’s blog, This Ain’t the Lyceum, and enjoy the weekend!