Advent usually creeps up on me without warning, but having the extra week between Thanksgiving and Advent has left me impatient for it to begin. It’s not that I’m ready for Christmas. We have a few presents purchased, and the Christmas cards have been ordered, but otherwise I have a fair amount of work to do.

But it’s welcome work. And I know Christmas will come either way.

I’ve signed up for two virtual Advent retreats, Best Advent Ever, and the Pray More Advent Retreat. I don’t actually believe I will have time to participate fully in both, but I’ve never tried anything like this before. Maybe it will be easier than I imagine.

I’m trying to be open to how God wants to prepare my heart this year. I might not be able to do any of it, but—with Advent still ahead of me—my purple-and-rose-colored glasses are firmly in place. And I just love Advent.

Our parish offered a ladies night where you could make your own Advent wreath. John and I received the most beautiful Advent wreath from my sister Maureen and brother-in-law Eric when we were first married, and we use it every year. So at first I thought I might not go. But a few friends were going, and I do love meeting members of our parish, so I decided we could find room for two wreaths in our home.

It ended up being a beautiful evening with great conversation and time together, and I was excited to bring my wreath home and show it to our boys. They are looking forward to lighting it this weekend. 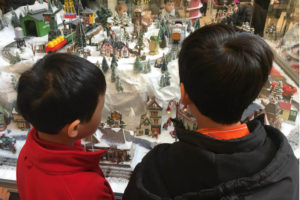 It’s train garden season! Last weekend we visited one of our favorites at the Shops at Kenilworth. It was set up differently, but we still enjoyed it.

And we were especially excited when we learned there was a scavenger hunt sheet you could pick up from the desk by Santa on the second floor.

Is there anything more fun than a scavenger hunt at a train garden? We couldn’t even find all the characters on the list, so we will be back.

There was an earthquake in Dover, Del., yesterday, and people near us felt the tremors. Somehow I missed it, and so did my husband and sons—even though we were all in separate places.

The last earthquake felt in Baltimore happened when John and I were in China adopting Daniel. Leo was napping at my mother’s house, and when the house shook, she thought he was kicking around in his crib upstairs.

He was just 3 back then. It seems so long ago and just yesterday all at once. But that is the one and only time he’s ever been accused of causing an earthquake.

I cooked a real dinner every night this week! That shouldn’t be surprising, but for once I actually planned out our meals for the week and then followed through. I made kabobs and a little ham and manicotti that I filled with ground chicken and then covered in tomato sauce. Not everyone loved everything. Not everyone ate everything. But that’s more of an aspiration than an expectation for me. 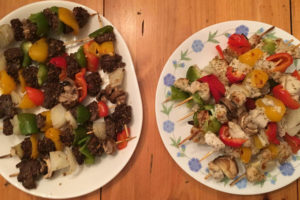 The manicotti were the biggest hit, and I made that recipe up on the fly. I just sautéed the ground chicken with some basil, oregano, and minced onions, scooped it into the cooked noodles, poured sauce over it, and covered part of it with cheese, since not everyone here eats cheese. I covered the dish with foil and cooked it at 450 for about 20 minutes, until the cheese was melted. Everyone ate them, but I forgot to photograph them! So you’ll have to settle for a photo of the kabobs.

I would make the beef kabob recipe again, but I need to find a better one for the chicken.

I forgot to share my November column for The Catholic Review, in which I share a story from my childhood and describe my favorite thank you note of the year. You can read my column, “The Gift of Gratitude,” here. It’s December today, but it’s still relevant. 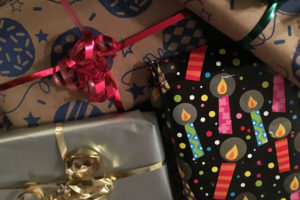 We had scheduled a birthday party for tomorrow for Daniel, who is about to turn 8. He was so excited. He wanted to invite everyone and anyone he could think of—and I thought that was great, but we aren’t hosting at our house, and I could only afford to include so many children. So we talked it through and made a list of friends—boys and girls—from both his old school and his new school.

We bought little boxes of candy and wrapped them as favors. Easy and fun and done.

The other day the dad of one of his friends stopped me to ask me what Daniel likes.

“He likes sports and animals and books and games and…well…you know…he really likes everything,” I said. “He has never received a gift he didn’t like.”

But he fell sick at school today, so we’ve postponed the party a week. How will he ever wait until next weekend? Somehow we will survive. And what a lucky boy he will be to receive his first Reconciliation and celebrate his birthday all in one day. I can’t wait.

Read more quick takes at Kelly’s blog, This Ain’t the Lyceum, and may your weekend be just what you like.