It’s one of the most stressful and exciting aspects of the Christmas season: creating our family Christmas card.All year I keep an eye on the best—or funniest—photos of our boys we capture.

Then when it’s time to put the card together, my mind is blank. Where are those wonderful photos we’ve taken? And why are all the ones I can find posed in summery settings, not looking right for Christmas at all?

When I sat down to focus on the card this weekend, though, I decided I had been overthinking the whole Christmas card process. We have two beautiful children. I should just pick a photo or two that I like, drop them into a card on one of these photo-card design sites, and order our cards. And I should do it this weekend while all the cards were on sale.

With an approach that simple, how could I fail? But before I ordered the card, I emailed it to my youngest sister, just to show her how good it looked. As I was hitting send on the message to her, I thought, “Wait a minute. Does this card say, ‘Merry Christmas’?”

I looked more closely, and it didn’t. Instead it said, “Married Christmas.” Huh. No wonder there had been a bride and groom on the sample.

When Treasa wrote back in the middle of the night—likely up feeding one or both of her seven-week-old twins—she pointed out that the card was signed from “The Newlyweds.” I am not sure what that says about my attention to detail that I didn’t pick up on that and my sister who has two newborns and two toddlers did.

That’s neither here nor there, though. As it turned out, she loved the card. So did my sister Maureen and her daughters, who thought it was hysterical. They pleaded with me to send the card. And, if it were just from me, I might. But there are three other names in that signature. Still, I decided no matter what card I ordered, I would get a few from “The Newlyweds” just for the family members who share my bizarre sense of humor. 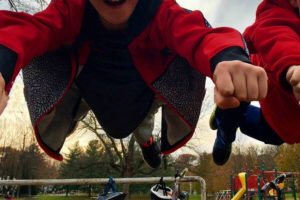 Meanwhile, knowing not everyone wants to receive a confusing card from our family, we set out to try again. The boys and I had a fun, spontaneous photo shoot at the park, and for one shot they pretended to be flying Superman-style on the parallel bars. My brilliant and creative husband suggested that I should edit the photo so they actually appear to be flying. I was sure that was beyond my abilities, but I was happy to be wrong.

That card will not be signed from “The Newlyweds.” It will be from a couple who have been married 13 wonderful years and are parents of two smiling children who apparently can fly. Maybe they can only fly on Christmas Eve when reindeer do—or maybe they only fly while Christmas photo cards are 40 percent off. Either way, the cards are ordered.

I have a feeling we’re in for a fantastic holiday season. Married…er…merry Christmas!