And it’s no small matter in this region. As the saying goes: When they ask you where you went to school in Baltimore, they aren’t asking what college you attended; they’re asking which high school you attended.

With that in mind, Catholic high school admissions directors and administrators throughout the area take extra care to make their acceptance letters a little bit more of a special moment for the anxious applicants.

At Archbishop Curley High School, there’s a months’ long routine for making the accepted students feel comfortable before joining the Northeast Baltimore campus. They first receive an acceptance letter in the mail that includes stickers, trinkets and tuition and scholarship-award information. They also receive an email acceptance video. Curley then hosts a welcome night in February for the applicants to see the school and meet future classmates. In May, the accepted students attend an orientation and in August the school hosts an iPad training and freshmen retreat.

Curley is preparing to try a new approach next year on the archdiocesan-wide notification date (typically in February or early March). Instead of mailing accepted letters, they will be hand delivering acceptance letters to each student’s home, following the practice of other all-boys Catholic schools in the area.

“This is a life-changing experience for these students,” said Demonya Womack, director of admissions at Curley. “Acceptance to a Catholic high school can change the trajectory of a child’s future.”

Calvert Hall College High School in Towson has already tried the personalized hand-delivery approach and found it to be quite well received, according to Director of Admissions Dan Mulford. He said Calvert Hall enlisted faculty, staff and alumni to deliver acceptance letters personally to the homes of eighth-grade applicants.

“We just wanted to do something differently to show how much we care,” Mulford said.  “The stories we’ve gotten back have been just incredible from those making the deliveries. They said they’ve been greeted with everything from tears of joy from moms to meeting dads who were alums wearing Calvert Hall sweatshirts while answering the door.”

“We weren’t sure at first how it would be received,” Mulford said. “But I can tell you it has been a monster success. It’s such a big moment for these kids and we try to recognize what a special moment it is for their futures.”

Loyola Blakefield in Towson started hand delivering acceptance letters in 2021 in part because of the pandemic.

“In COVID times, we wanted to spend as much time with the families as possible,” said Loyola’s Director of Admissions Stephen Abrams. “We thought: What better way to add a personal touch than to hand deliver a bit of good news. It was met with such excitement that we decided to make it a permanent part of our future acceptance process.”

The future is an important part of the admissions thought process at St. John’s Catholic Prep in Buckeystown as well.

After a 23-year career at Mount St. Mary’s University in Emmitsburg, Mary Catherine James is bringing some of her college expertise to her new position as admissions director at St. John’s.

She also brings some of those college touches to the Frederick County school. St. John’s recently moved its initial notification of acceptance online. Applicants are asked to visit their online portal to see if they’ve been accepted and then they are mailed a packet with information on orientation, scholarships awards and tuition payment plans.

“We want students to enjoy the experience,” James said. “But this is a different generation. We’re trying to take the next step and transition to more of a college-application process because that is what we are preparing students for. Everything with college is online – applications, transcripts, letters of recommendation.

“We also try to add as much of a personal touch as we can because with COVID there has been so much doom and gloom. We are trying to make them feel welcome and part of our community,” said James, who noted that in recent years St. John’s has placed accepted-student signs in applicants’ yards.

At Mount de Sales Academy in Catonsville, Director of Admissions Mattie Wood said online notifications have eased some unnecessary angst since students didn’t always receive their acceptance packages on the same day because of mail delivery.

“It’s such an important decision that these families have been weighing, some as early as sixth grade or even earlier,’’ Wood said. “We want to make it as big a deal as we can for them. We want to communicate with them as best as possible and help them make the best decision. We do our best to add a personal touch because it’s a really big deal.”

Archbishop Curley’s Womak, a 2011 graduate of the school, said the experience of meeting the accepted students is always a special event for admissions personnel throughout the archdiocese.

“The smiles, so many smiles,” Womack said. 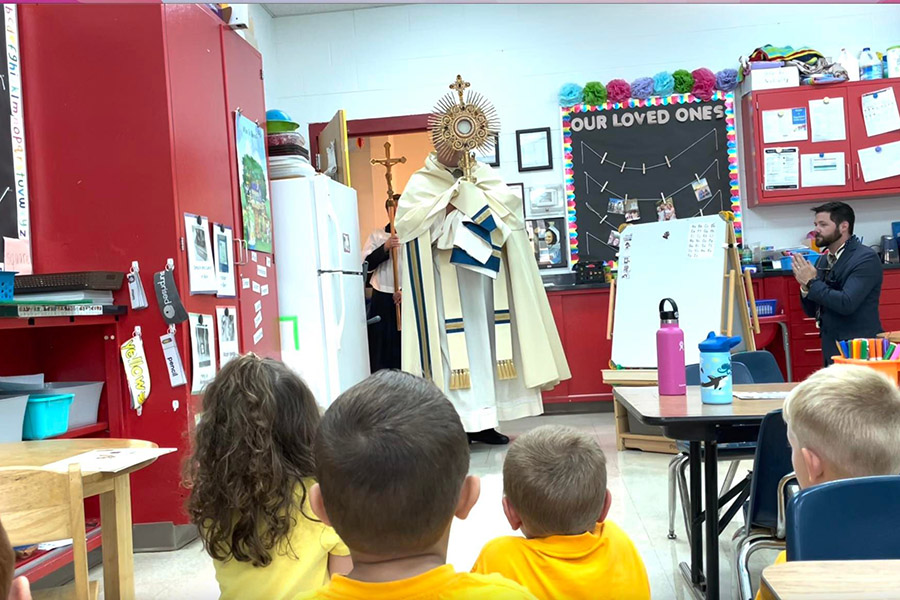