I’ve been looking at sweaters for weeks. Back in November I passed on a flamingo Christmas sweater and have been regretting it ever since. 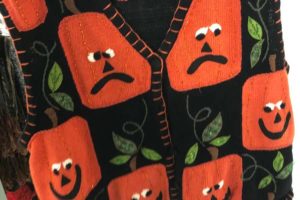 So last night I ran to a thrift store, and they had some ugly sweaters—including a Halloween vest that was amazing. But I wasn’t sure whether I would be disqualified.

I carried around a distinctive football-themed sweater that I thought I might be able to convert to a Christmas sweater. 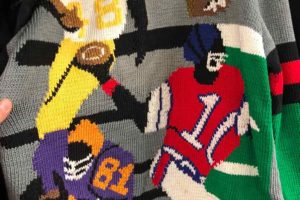 I finally decided I really didn’t want to own anything that unattractive, and it was such a thick sweater that I was afraid I would pass out while wearing it. So I returned it to the rack.

I finally ended up at Marshall’s, where I bought a cow sweater I had seen earlier, and which you saw at the top of this post. I didn’t win the contest, where the competition was fiercer and more fun than a reindeer game, but I enjoyed being part of the fun.

Now I’ll wear it all Christmas season. Then I’ll give it to my cow-loving sister for her birthday in May—unless I’m completely attached to it by then. Did I mention that it jingles when I walk?

While I was at the thrift store, I spotted an Infant of Prague statue in a display case. I pointed to the statue and asked how much it was, and the employee behind the counter said, “You mean the Queen Elizabeth?”

“Yeah, the Queen Elizabeth,” she said.

She took it out for me to see more closely, and I thought about how to explain that it wasn’t a queen, even though he was wearing a crown.

“It’s actually the Child Jesus,” I said. “See how He’s holding the world in his hand?”

She called a colleague over to show her. They were intrigued. He wasn’t in great shape and only had one torn outfit. The Infant of Prague—or at least this one—is supposed to have outfits for all the liturgical seasons. And he was $30, which seemed high for a statue in that condition. But he has been on my mind ever since. 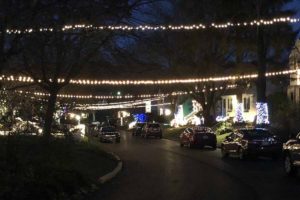 Christmas lights add so much beauty to this season.

Our outdoor lights are up, thanks to my husband and sons who worked to install them last weekend. We’ll work on the tree and indoor decorating this weekend.

Meanwhile, I’m enjoying the lights we see as we’re driving and walking around. (The lights pictured are from a neighborhood I walked through the other night.) 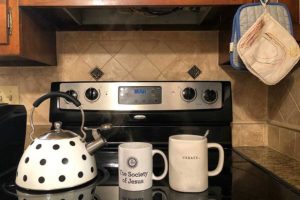 I’ve been participating in the #SnapAdvent challenge that my friend Allison is hosting on Instagram. Every day there’s a theme, and I enjoy trying to think of a photo to share. Yesterday was “patience,” which was easy. I took a photo of my teakettle as I was waiting for the water to boil.

Today the word is “camel,” which should be a little more interesting since we haven’t brought our nativity scene out yet. I’ll come up with something. Or I won’t, and Advent will still continue! I’m trying not to put too much pressure on myself.

Our younger son turned 9 this week, and the celebrations were as extensive as you could imagine. He didn’t have a party for friends this year—his choice—and it did simplify our December a bit. But he has been well-celebrated. 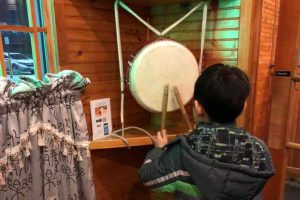 We gave him his gifts on his birthday morning before school, except for one (a Nintendo Switch) we gave him last weekend so he could enjoy it on a non-school day. On his birthday night, he picked his favorite restaurant for dinner, and he ordered all his favorites—miso soup and sushi and chicken yaki udon. On the way out, he beat the drum by the door for luck. Then we went home and he blew out his candles.

Nine seems so very mature. It’s a wonderful age. I wish I could freeze our children right where they are, but I also love watching them grow. I feel so blessed to be on this journey with them.

Tonight at dinner I made our 9-year-old’s favorite rice. It comes from the frozen food section, and I made half of the same box last week, so I know the recipe hasn’t changed. He tasted it and said he didn’t like it.

“But that’s your favorite!” I said. “You always love that kind!”

So there we go. 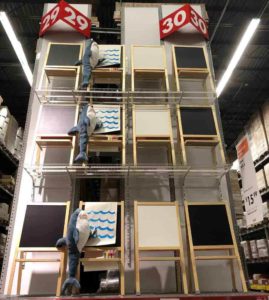 The other day we went to Ikea and saw these amazing stuffed sharks. They were huge, and the sharks apparently know how to paint! Sharks always remind us of my brother-in-law Eric, who was a shark fan. But I explained to our sons that even though we might want to give their aunt a large stuffed shark, the better gift is not giving her a large stuffed shark that she doesn’t need.

So we left the sharks behind, and we took a picture so we could let her know what we didn’t get her. I could be wrong, but I’m pretty sure she’s grateful. It’s really the thought that counts, not the huge shark under the tree.

But if you’re looking for a large, beautiful stuffed shark for someone on your list, you now know where to go.