The other day our younger son came to me with an idea.

“What if we filled a jar with pieces of paper with fun things to do this summer? We could pick one every day and then go do it!”

I agreed right away. I pulled out a plastic cauldron and started brainstorming labels for it, “What we’re cooking up this summer,” or “What’s hot this summer with the Buettners.”

Not surprisingly, no one here cares how we label the cauldron. But the whole idea has changed. He took a strip of raffle tickets, tore them in half, gave each member of the family a pile of tickets, and threw their matching tickets into the cauldron. If your ticket is pulled out of the cauldron in the morning, you get to pick something fun to do that day.

“Like going for a snowball?” I said. “Or to the library? Or having ice cream for dessert?”

Suddenly it all made sense. Someone wants to spend the summer fishing.

We just need to get this summer started. 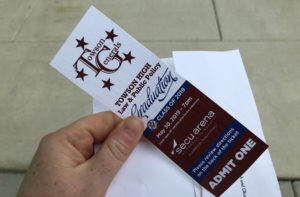 My godson graduated from high school this week. I knew it was coming, but I didn’t know which day. I had reached out to his mom, my good friend, earlier in the week to ask her to go to lunch, and he came along, too.

We had the best time, and I marveled at how children grow up into these wonderful people who are fascinating to talk with. At the end of our lunch, my friend invited me to go to his graduation.

“We have one more ticket,” she said. I was so excited. In a world of limited graduation tickets, I hadn’t even considered that I might be able to attend.

I went, and it was amazing to be there. I had the chance to sit with his family, see him cross the stage, and think of how I’ve had the chance to watch him grow and be part of his life. Being a godparent is an extraordinary honor. I remember being thrilled and humbled when his mom asked me, and I can’t believe that was more than 18 years ago. 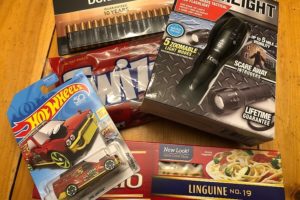 When I went to the store to buy a graduation card, I asked a store employee whether she had any suggestions for gifts for graduating high school senior boys. I thought maybe there was some hot item that was new this year.

I had been planning to give money, but I wanted something more personal to go with it. After speaking with her, I was more determined than ever to think of a gift.

I looked up the motto of the college my godson has chosen, Swarthmore, and I saw that it was “Mind the light.”

So, I bought him a flashlight and batteries, which seemed useful anyway. Then I added a Hot Wheels pizza delivery car (because I used to give him Hot Wheels and Matchbox cars when he was young), a package of Twizzlers, and a No. 19 pasta in honor of the Class of 2019.

I love giving appropriately numbered pastas. Giving pasta is odd, perhaps, but practical. Who doesn’t want an extra box of pasta—and who knew linguine was number 19?

I’m not sure I should recommend this as the graduation gift of the season, but I throw this out there just in case. 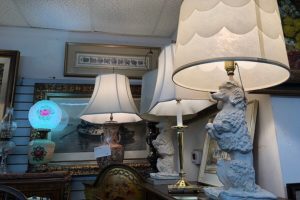 There might be a better way to spend an afternoon than shopping at used furniture stores, but my sister Treasa and I haven’t found it yet.

We went together to a few stores and texted photos back to our husbands as we traveled along. We were both lamp hunting, which I didn’t realize until we were browsing together.

I didn’t buy the poodle lamps or any of the corner cabinets I looked at wistfully as we worked our way through the stores. Then we stopped at Savers and came home with a pile of used books. 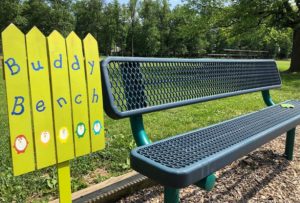 What do you think of buddy benches? The idea is that a child who doesn’t have someone to play with would sit on the bench and others would approach with an offer to play.

It’s the kind of thing I thought I liked until I spoke with my niece Elise, who explained that she thinks children who sit on them find themselves feeling even more put on the spot and less included.

Lately I have been spending time thinking about including people and really helping them feel they belong. I’m not sure where I fall on the buddy bench question. But I know that I was a child who didn’t make friends easily, I would never have sat on a bench to indicate I wanted a friend.

But…I’m also more like my third-child niece Elise than I might like to admit. So maybe there are children who benefit from the buddy bench. Or—and I think this might be possible—maybe the buddy bench is a reminder to children who do make friends easily to reach out to those who might be feeling left out. 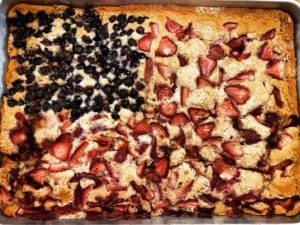 For Memorial Day I made a flag cake with strawberries and blueberries.

I used this peach cake recipe, which works just as well with berries.

We didn’t do much of anything for Memorial Day, but we did have cake, and we invited my parents to come enjoy it with us.

Now I’m looking forward to peach season. But I’m not trying to hurry this summer along. 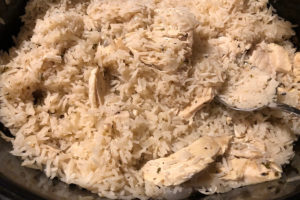 We had our last regular season little league game, and now we’re heading into the playoffs. I enjoy being a baseball mom. It’s a beautiful sport, and the weather gets better as the season continues. I love watching my son on the diamond. He’s so happy there.

The only thing I can’t quite figure out is how to feed my family on game nights. No one wants to eat before getting to the field at 5:30. By the time the game ends after 8, everyone is ravenous. And we don’t always eat the best food at that point.

For one golden night, though, I came home, threw ingredients in the crockpot, set it on high, and it was ready when we came home from the game. I don’t expect a trophy, but you might like the recipe. Here it is.