We had so many cousins to enjoy over the Christmas break. There were gifts and food and football games. It’s always amazing to me that when we talked about adoption, we didn’t really think about how our children would fit into the team of cousins.

As it turns out, our older son has four cousins who were born the same year, and our younger son has two, and they have another cousin who is right in between them age-wise.

It’s so wonderful to me how two children born on the other side of the world could slip so seamlessly into this large American family. I’m feeling especially sentimental since yesterday was the 10th anniversary of the day we saw our older son’s photo for the first time. I wrote about that here. 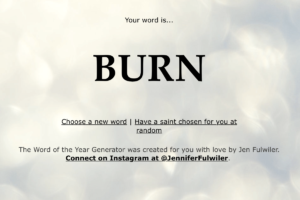 Did you pick your word of the year and saint of the year, thanks to Jennifer Fulwiler’s generators?

My saint of the year is St. Clare of Assisi, which is exciting because I know her but have never really spent much time talking with her and learning about her. My word of the year is “Burn,” which I am trying to view as inspiration to set the world on fire. Right now, though, I think it’s more about my New Year’s resolutions crashing and burning.

Just kidding. I never picked any resolutions. The New Year came in as a tornado this year. Maybe I’ll pick resolutions for Chinese New Year instead. 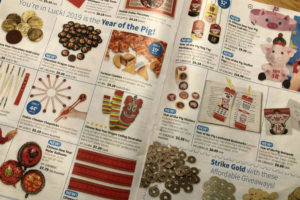 I came home from a busy day on New Year’s Eve and realized I had no plan for anything fun for the night. I was feeling kind of bad. My parents always pushed the clocks ahead a bit and had a parade for us at “midnight.” And here I was pulling meatballs out of the freezer and microwaving peas.

Then I went to clear the dining room table and noticed that our older son had left an Oriental Trading catalog open to the Chinese New Year party supplies. He knew I would want to see them. It made me feel so much better because we are creating fun traditions with our children, and that really is our favorite holiday.

I took some wine glasses out and let the boys drink orange soda out of them. And we told them they could stay up until midnight. They were happy as can be. Happy New Year! 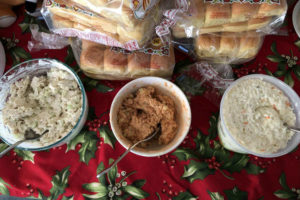 My sister Treasa threw what is now an annual Christmas carol-themed party, and we had a blast. But we didn’t make signs this year because this was the craziest Christmas in recent history.

I made a “Rotel It on the Mountain” dip, “Feliz Navidip,” served them with “I Saw Three Chips” and “Pretty Peppers” (which could alternatively have been “I Heard the Bell Peppers on Christmas Day”), and “What Chive Is This” (an onion dip) in a bread bowl that was rye because my boys reminded me about “Angels We Have Heard on Rye” when we were caroling and shopping our way through the store.

We also had “O Little Town of Bethle-ham,” “Salami and the Ivy,” “Frosty the Salmon Salad,” “Chicken Run Joyfully Salad,” “Jingle Balls,” “We Three Wings,” and “Have Yourself a Merry Little Cupcake.” Drinks were “Fanta Baby,” “Rudolph the Red-Nosed Root Beer,” and “You’re a Mean One, Mr. Punch.”

I went to get something out of the fridge and saw a container of cole slaw.

“Oh, here’s the Good King Wenceslaw!” I said to Treasa.

“What? Oh, sure,” she said. “I just thought it would be good to have cole slaw. But that’s great.”

The food was delicious, and we might have done some singing. I hope I always remember how my boys and their cousin Origen caroled their way through the grocery store, singing, “Rudolph the Red-Nosed Root Beer.”

Did everyone in the store think it was cute? I don’t know. But the man at the deli counter gave each of the boys a free slice of capicola. Or maybe it was “Silver and Capicola”? 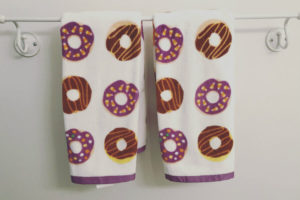 Did you buy yourself anything for Christmas? I picked up a set of doughnut towels and told myself I might give them to someone else.

But I just couldn’t. I asked my husband what he thought, and he took one look and said, “Oh, no, we are definitely keeping those.”

So we have a new set of hand towels.

Merry Christmas to me. 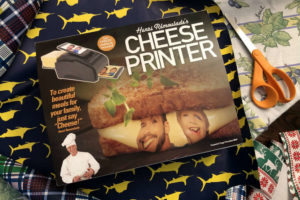 Have you ever seen the prank boxes you can use for gift-giving? We ran across some at Walmart before Christmas, and we had so much fun deciding who should receive them and what we would insert inside.

We ended up giving my dad one that said it contained a 12,000-piece puzzle of a monochrome sky with one tiny moon in it. And the other one we are giving to my 18-year-old godson, who hopefully does not read this blog because I’m including a photo.

We do love joke gifts around here.

I have only witnessed the anointing of the sick a handful of times, but twice this week I have sat and prayed with a priest at an ill loved one’s bedside. I am struck by the beauty and the power of those moments. But it’s so much at once.

I don’t feel comfortable sharing the details because they aren’t mine to share, but I would so appreciate your prayers for hope and healing for these people we care so much about, for those treating them, and for all those who love them.