This story begins six years ago on a Sunday during the summer. John and I dropped our sons off at my parents’ house to go house hunting. The first house we walked into was practically perfect. 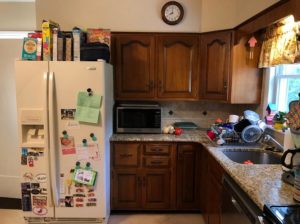 The yard was flat and open, the bedrooms were the right number and size, the basement was spacious, and the neighborhood seemed friendly and charming.

The kitchen, however, was not quite right. After our tour, we stood outside and discussed how everything felt right about the house—except for the kitchen.

I thought maybe we should make an offer. John wasn’t sure.

He knew I liked to cook, and he worried the kitchen wasn’t right at all. Besides, he didn’t think we should put an offer on the first house we saw. That was perfectly logical. The next day another offer came in, and the house went off the market. 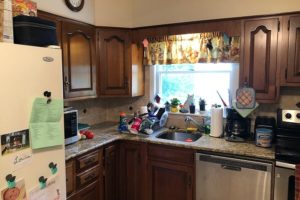 It wasn’t meant to be. Or so it seemed.

We went on with our search, looking at house after house after house, and nothing was even close to right. We found ourselves talking about that first house we had seen—the one with the small kitchen.

Then the offer on that house fell through, and it came back onto the market. We didn’t even tour it again. We signed the papers to make an offer, and my sister Treasa and I drove to the house and placed our offer in the hands of the owner. 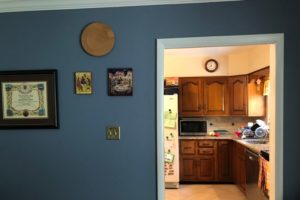 Treasa was expecting her first baby, Georgie, at the time, and he will always be part of the story of this house for me. She and I even joked that we had to buy the house in time for me to host her baby shower a few weeks later. And I did.

John was right, you know, the way husbands often are, and the kitchen was definitely cramped. I didn’t have room to store my pots and pans—never mind the food.

The table in the kitchen became our “snack table,” and it overflowed with bags of chips and cans of soup so the boys and their sitters would have easy access to them. 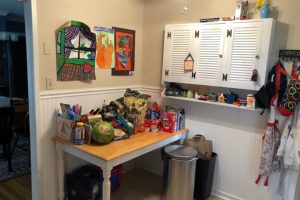 We had this one white cabinet across one wall that was about four inches deep. I never could figure out what to store in it besides birthday candles, matches, and aluminum foil. Whenever I opened the door, something fell out.

At some point, a while back, when the fan in the hood over the stove died and we couldn’t replace it without a major construction project, we started thinking it might be time to take action.

But renovating a kitchen seems like an enormous change—and not just financially. I love an eat-in kitchen, and for a while I wasn’t sure about opening the wall to the dining room. But gradually I came to see that it might be a good idea. It might, in fact, be the best possible way to make the space work. 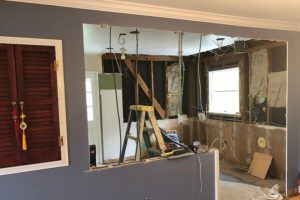 Over the past couple years, whenever we have had guests, I have often caught John engaging them in kitchen-design conversations. While I was setting out more napkins or stirring the guacamole, I would overhear my guests as they stood in the kitchen, helping John decide on refrigerator placement and cabinetry.

The most recent kitchen planning session was during our Chinese New Year celebration. That morning I had spontaneously invited a family from our parish who have five children to join us for the party, and they had come. Their children slipped right into the light-saber chaos in the backyard, and the parents were just as delightful. 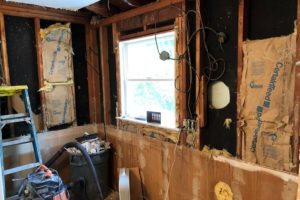 It turned out the father of five, Artur, designed and built kitchens. I hadn’t realized that, but John—as I found out later—did. As the dumplings disappeared, I realized the design conversation that was happening in the kitchen had a new energy and focus.

How often do you have someone standing in your kitchen with a vision and a way to bring it to life?

Talking with Artur about the kitchen was easy. He listened to us, and then he built on our ideas. He seemed to know what we wanted—or helped us see the benefit of stretching our idea a little bit further (or told us when we made a bad decision, like with our backsplash). 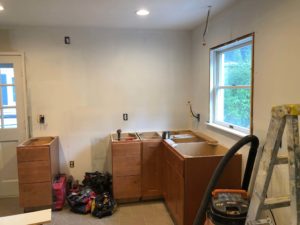 Artur was so low-key about the process, guiding us step by step as things came along. But he managed to bring the whole project together in three weeks—even with taking a four-day weekend around Labor Day.

I still don’t know how he managed it.

There were some hiccups, as there must be with every renovation project.

For example, we spent so much time picking tiles for the floor. Then, the night before they were to be installed, the tiles broke in the back of Artur’s truck when he was driving over a speed bump. I had to select new ones with Artur quickly the morning they would be installed, texting photos to John to get his approval.

In the end, we decided we like these better—and they are much stronger and thicker than the ones that broke so easily. I told Artur that I am glad they broke in the truck, rather than once they were installed.

We finally settled on one with Artur, but he couldn’t find enough of the tiles we had selected. So, he picked some similar tiles and installed them. He knew better than to call and tell us there was a problem. He just handled it. They’re my favorite, especially since the backsplash is done.

What else can I tell you about the new kitchen? 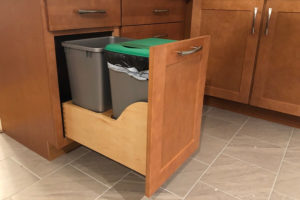 I really enjoy the openness of the space and how I can feel less cut off from the family while I am cooking.

I love how the trash can and recycling are hidden inside a drawer.

I like that the fan in the hood over the stove is strong but not loud.

The new appliances are so exciting. I have never owned a dishwasher like this one—so quiet and…well…it actually cleans the dishes the first time it runs. 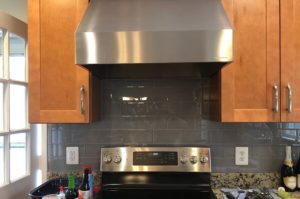 The sink is bigger than the one we had in our former kitchen, and it’s like an ocean compared to the thimble I’ve been washing dishes in for the past three weeks. Artur even persuaded me to have a soap dispenser installed. It seemed ridiculously extravagant, but hey, you only do this once.

It’s amazing what a difference it makes. 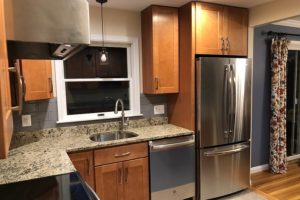 We switched where the fridge and the stove were—a move that seemed minor in my mind, but that change actually has a tremendous impact on the flow of the room.

And, thanks to the cabinets that go to the ceiling and are on every side of the room now, we have so much cabinet space! We have been enjoying organizing and moving things into place.

The night that Artur finished grouting the backsplash, he sat with us in our dining room and we admired his work together. I didn’t actually do anything except microwave soup and wash dishes in the sink for a few weeks. Arthur did all the work. But it felt like a collaborative effort. I am very grateful to him for making it painless and fun and for finishing it sooner than I thought he would. 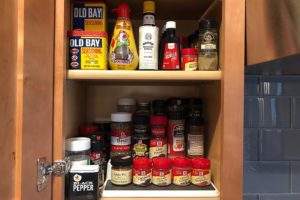 The whole living area of the house has changed, yet the children already feel at home hanging out at the breakfast bar, eating soup and doing puzzles and playing games. How can something so new and different already feel so comfortable? And how long can my spices stay neat and organized?

Before we started the project, I didn’t know exactly what we were going to change. Throughout the process, we’ve had to make a number of decisions, and it wasn’t always clear what we should decide. I’m someone who is usually happier with possibilities than final decisions. 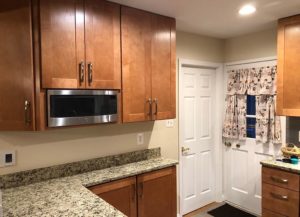 Today I’m grateful that the decisions are behind us. Now we have a functional, beautiful space. And maybe I will never need to talk about backsplashes again.

So, the story starts six years ago with our first visit to this house. And the story continues with this completely new kitchen in the home we love. I already have a feeling the breakfast bar will be my writing spot.

And that countertop is clearly waiting for me to roll out a homemade crust for an apple pie.