Our older son is 10 today—double digits! It’s his golden birthday (10 on the 10th), and he has been counting down the days, of course. We don’t have anything too wild in store. He’ll open gifts, pick up donuts for his classmates and teacher, whose birthday is also today, and spend the day at school.

We don’t have a big bash planned for the evening, but his cousins and aunt are visiting from out of town, so there will be fun and food and festivities of some sort.

It’s hard to believe he’s 10, but he’s ready. Am I? The answer to that is certainly more than a quick take. But I’m honored to be his mother and so blessed to be part of his story. 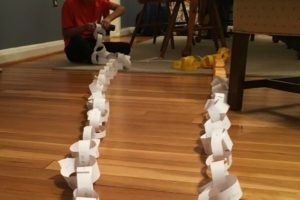 Our theme for November at Sunday School is gratitude, and we made gratitude garlands—paper chains—with the children last week. Daniel’s teacher challenged them to see how long they could make their garlands. Daniel loves a challenge, and this is just his kind of task.

He has spent the week sitting and filling slips of paper with things he’s grateful for. Helicopters, hair, feet, China, scooter, air conditioning, Annapolis, memories…the list goes on and on and on. For a few days he would stop whatever he was doing when he thought of another thing he was grateful for. Then he would run to fill out another piece of paper for his chain.

Watching him work was humbling. I found myself realizing I have never once been grateful for “locks,” for example, never mind “hearing.” I take many things for granted.

The other day I grabbed my purse and announced I was going to the store.

“But what if I need to know how to spell something?”

I have long believed that mothers are basically short-order cooks and dictionaries. But we’re good ones.

Daniel scored his first goal of the season in his soccer game last weekend! It happened at the buzzer, though, so apparently it didn’t count. So maybe one day when someone looks in the official rec council archives for the under-8 soccer team, it won’t say he scored a goal that day. I still believe it was a goal.

And, no, I don’t actually believe those archives exist. 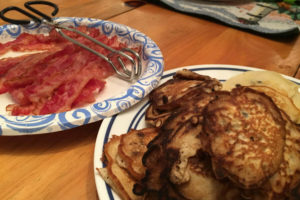 Sleepover is catchier but less true.

In my limited experience, though, the only way to prepare for a sleepover is to stock the pantry and fridge. As I see it, you can’t have too many Slim Jims and mini chocolate chip pancakes. 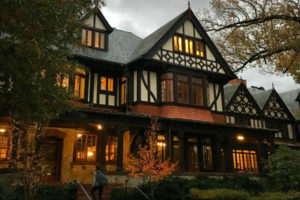 Have you adjusted to the time change? I think we’re all still a little thrown off here. The children are bouncing out of bed well before 6. In good news, we have had plenty of time in the mornings. In not-as-good news, it’s dark in the late afternoons.

On Monday, all day I kept thinking how dark it would be when I was leaving work. But as I walked to my car, I saw the lights inside the buildings on campus, and I was struck by how beautiful it all was. I took a photo of the Humanities Center. It looked so warm and inviting in the dimming light.

I’m grateful for my job and for the beauty of that time of night—and for a way to capture that and share it with you. 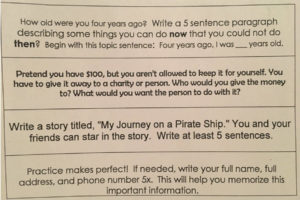 I’m not a fan of homework. It cuts into family time, and I’m never sure we’re getting that much out of it.

That said, I really enjoy some of the writing prompts our second grader brings home. This week’s I wanted to sit down and respond to myself.

Pretend you have $100, but you aren’t allowed to keep it for yourself. What fun!

What are some things you couldn’t do four years ago? That is such a great question. It really made me think about what I’ve learned over the past four years. Mine weren’t as interesting as Daniel’s because I already knew how to whistle, snap my fingers, and ride a bike. But it is fascinating to stop and think of how you’ve grown and changed in four years.