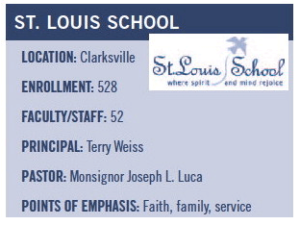 CLARKSVILLE – Three educators in particular underscore the combination of innovation and tradition that made St. Louis School repeat as a National Blue Ribbon School of Excellence.

All three women are graduates of the Howard County parish school, and attest to its growth, both in curriculum and numbers.

As assistant principal and director of admissions, Michelle Kemp is able to quantify that growth, which included 62 boys and girls in the class of 2017.

“Prior to my graduation in (1999), we were a one-track (class) school,” Kemp said. “Now, we have two classes from kindergarten to grade 8. We also didn’t have a pre-K program.”

Kemp attributes the thriving school enrollment to “the commitment of the school to making a Catholic education possible for anyone and everyone who wants that for their children,” she said.

That extends to those with special needs, as the Louis IX program for students with Down syndrome is in its second year. Another alumna, Kathleen Hrinkevich, is one of its para-educators, and sees her time alongside a second-grader as “a ministry.”

“She and I will do work at her level with the other children, while they’re doing their work in the same classroom,” Hrinkevich said. “She  goes to all the ‘specials,’ such as music, gym, art, computer and such with all the children in her class.”

Liz Brigham, a retired educator who was taught at St. Louis School by the Sisters of Divine Providence of Kentucky in the early 1960s, runs its recess program.

“They (the sisters) gave you a good academic background,” Brigham said. “They were really serious about academics, but they also gave a good spiritual background.”

Terry Weiss, in her 22nd year as principal, pointed to that component as a constant through the years.

That’s one way in which a spirit of service is developed.

“We are trying to get these children ready, first, to be 21st-century learners, and to have all the technology experience and knowledge that they need, but also to think about other people,” Weiss said. “To show kindness, compassion and love to others. Because what’s going to happen to this world if we don’t do that?”

The school community is bolstered by teachers such as Marie Hatfield, one of 12 recognized by the Archdiocese of Baltimore at its convocation at the start of the school year. She’s one of four specialists in the Illumination program, which helps those with learning disabilities, teaching reading to first- and second-graders.

“The second time is twice as great,” Weiss said.

A record four Catholic schools in the Archdiocese of Baltimore received the National Blue Ribbon School of Excellence Award from the U.S. Department of Education, the highest academic honor bestowed upon a school by the U.S. government, last September.

St. John the Evangelist School in Long Green Valley and St. Mary Catholic School in Hagerstown received the distinction for the first time.

Prior to coming to the Catholic Review as a bilingual staff writer in December 2017, Rico worked as the Hispanic communications reporter for the Catholic News Herald, the newspaper for the Diocese of Charlotte, NC., from September 2013 until May 2017.

Prior to his post with the Catholic News Herald, Rico ran his own Spanish interpreting company in the Charlotte area, as well as working as a freelance writer for a local Charlotte weekly newspaper.