We took our kite to a local park last weekend and tried to get it to fly, but the wind was not quite strong enough. That didn’t stop Daniel from sprinting across the field as fast as he could go, hoping the kite would stay in the sky.

Today is Brothers’ Day! What? You didn’t know? That’s because it’s not a real thing—at least not outside our family. Today is the anniversary of the day our sons met each other.

When we traveled to China to adopt our younger son, we didn’t take his big brother. Leo stayed home with Grandma and Grandpa and was the only non-jet-lagged member of the family when we got home.

Leo still remembers how we came home and brought his new baby brother into his bedroom. We pulled him out of bed to come downstairs and play with this toddler who started throwing his toys around the room. (I don’t remember that part, but Leo does, and his memory is much better.)

Anyway, Brothers’ Day is a very popular day around here, and the brothers make sure it’s well-celebrated.

I have been off all week with our boys, and we have had so much fun. I thought we could use a week before school starts where the boys didn’t need to be on their best behavior, as I assume they always are for sitters and at camp. I wanted them to have a week to relax.

So we’ve done a little of everything, taking some outings, but also fitting in bicycle riding and relaxing mornings where we play at home. The other afternoon we played Monopoly twice—once by the rules and once making up the rules however we wanted. Yesterday we played Uno and dealt each of us 40 cards. I know. We’re a wild and crazy bunch.

I hope we can adjust to life with rules again next week. 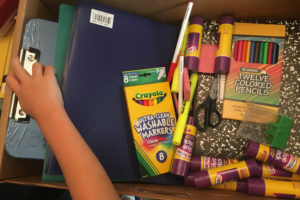 One thing we didn’t do this week was buy school supplies. Our school offered an option for us to order school supplies and pick them up this week. It was amazing. I love school supplies, but I find the lists stressful. Do I have the right kind of folder? If students only need two red pens, why don’t they sell them individually? What do the students do with all those glue sticks?

Anyway, it was an absolute joy to pick up their complete boxes of school supplies. There were even printed labels for each boy tucked inside.

As they were labeling their supplies, one of the boys noticed the pencils were No. 2 pencils, and suddenly they were doubled over with laughter on the floor. It took me a few minutes to understand why that was funny. But then I was never an elementary school boy.

We took the labeled school supplies with us to sneak a peek at their seats at school. It was exciting, but also a little bit scary. Now I sort of wish we could just fast-forward to the first day of school, so everyone will find out that school is good and people are nice and the teachers are great.

But at least they know where their desks and lockers are. 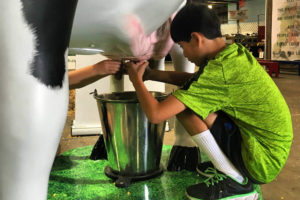 When we went to the Maryland State Fair, we did more than visit the Ferris wheel. We also saw some of the farm animals, which is one of my favorite parts—and not just because it’s free. The activities for children were really well-done this year, and I can confirm that our children now know how to milk fake cows.

As we were leaving, Daniel was starving, so we stopped at a stand to get a corn dog.

“We’d like one of your corn dogs, please,” I said to the young man behind the counter. “I hear they’re the best ones at the fair.”

Then I felt a little guilty because I was just trying to be nice. So I told him we had picked his stand because the corn dogs looked and smelled so good, which they did. And he seemed fine with that, but Leo and Daniel and I discussed on our way to the car that the man was a little disappointed that the corn dogs weren’t the talk of the fair.

But maybe they should be because Daniel inhaled that corn dog. So if you are a corn dog fan and happen to go to the Maryland State Fair, you should stop by the stand that’s on the northern side of the fairgrounds that sells the extra-long corn dogs. They really are outstanding. 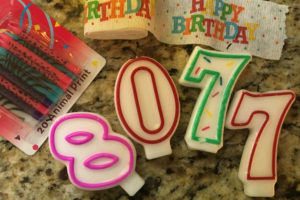 I had a long list of things I had hoped to accomplish during my week off, and one was going through one of the cupboards in the kitchen that has become a catch all for everything from tee balls to craft projects I haven’t had the courage to throw away.

I made some courageous decisions and discarded a few items. But I realized when I looked at a pile of birthday candles that I seem to be unable to let go of the number candles.

“Isn’t it good that I have an 8?” I thought, thinking of Daniel’s 8th birthday in December.

But then I realized I had two number sevens, so I must have bought one for each boy. And I have a zero even though I have no idea when we would have used that. What are the chances I’ll remember the 8 for Daniel and the zero when I need a 10 for Leo in November?

Find more quick takes at Kelly’s blog, This Ain’t the Lyceum, and enjoy the holiday weekend.