A dozen years ago or so, back before we had children, my mother asked me to bring the sweet potatoes to our Thanksgiving dinner. She sent me a recipe she or my sister-in-law had found somewhere.I went to the store and carefully selected the ingredients, including something alcoholic—sherry, perhaps? Bourbon? I can’t recall.

What I do remember is that I followed the directions, put the sweet potatoes in the oven, and the liquid that was supposed to boil off refused to disappear.

John and I waited and waited as I checked and rechecked the sweet potatoes. I kept calling my mother to say we would be a little later than expected—and then even later. I started wondering whether we would make it in time for pie.

In the end, I pulled the sweet potatoes out of the oven, and we drove to my parents’ house for dinner. The sweet potatoes weren’t particularly remarkable, which was a blessing since I refused ever to make them again.

In good news, though, these days if my mother gives me an assignment for Thanksgiving, it’s something she knows we can do without—sangria, for example, or an appetizer.

This year she asked me to make my hot broccoli dip, and I happily said yes. I have made it many, many times. Our boys and I also wanted to bring a cheese and pepperoni tray, so I said we would take care of all the appetizers. We have a vision of making a cheese tray that is shaped like the Mayflower, sailing along on pepperoni waves. Is it possible? Only time will tell. Check back on Thursday. 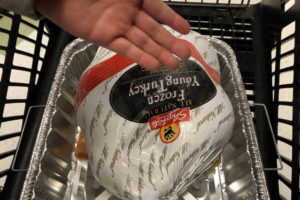 Last week I realized I had earned a free turkey at the grocery store, so I also offered to bring the turkey. It’s thawing in our fridge right now. I’m not actually going to cook the turkey—that’s Grandpa’s job—but even so I’m a little nervous about being The Person Who Is Bringing the Turkey.

What if our power goes out and the turkey goes bad? What if I didn’t put it in the fridge on the right day for thawing? What if free turkeys aren’t as tasty as expensive ones? What if my father takes the plastic off and there isn’t even a turkey inside?

So many things could go wrong. In the end, though, Thanksgiving isn’t about the turkey or the sweet potatoes or the mashed potatoes and gravy. It’s about the people. And the pie. And the Mayflower-shaped cheese tray.

As we count down to Thanksgiving Day, I hope you have much to be thankful for this year. And I hope you aren’t assigned the sweet potatoes.