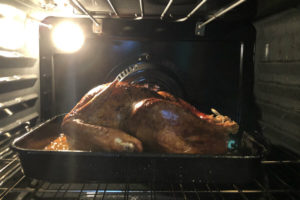 Despite all my worry that the frozen turkey wouldn’t thaw in time, it thawed beautifully, and it cooked up even more perfectly. I watched my father pull it out of the oven, and it was gorgeous—and delicious.

Everything tasted so good this year—my mother’s carrots and onions casserole, the mashed potatoes and gravy, the dressing, the cranberry sauce from a can (the best!), the sauerkraut, the mashed rutabaga, the peas, and the rolls. One of my sons ate turkey, and one ate potatoes and gravy and cranberry sauce. They’re missing out on the best parts, but I guess that leaves more leftovers for the rest of us.

We were in charge of the appetizers, so we brought my hot broccoli dip and a cheese-pepperoni-salami tray in the shape of the Mayflower. We had some internal disagreement over whether Plymouth Rock could be represented as a triangle—though no one questioned the red ocean waves. 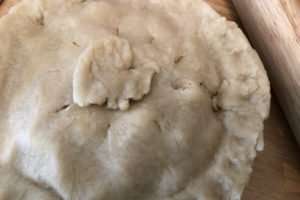 After I made the appetizers on Thanksgiving morning, I still had a couple hours before we needed to be at dinner. I don’t seem to know what to do with free time since it occurs so rarely.

“Should I make an apple pie?” I asked myself aloud. And I heard three voices respond with an enthusiastic yes.

“More pie on Thanksgiving is always a good thing,” my husband said.

So I peeled and sliced the apples, rolled out the dough, put the pie together, made a little dough turkey for the top, mentioned aloud how nice it would be to have a pastry brush to brush the crust with milk, sprinkled cinnamon sugar all over it, and baked it.

It seemed so extravagant and unnecessary because my mother’s pumpkin pie is incomparable. I’ve never had a pumpkin pie as good as hers, and I never will. But having a little apple pie on the side just adds another fruit to the mix. I didn’t hear anyone complain until….

…this morning when Daniel asked me for a piece of apple pie for breakfast. I was happy that he wanted some because he hadn’t seemed interested in the pies on Thanksgiving. 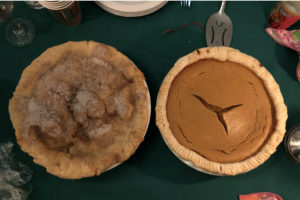 I cut him a piece of pie, and then I dropped it on the floor while scooping it out. Sigh. Is there anything worse than wasted pie?

So now we know. 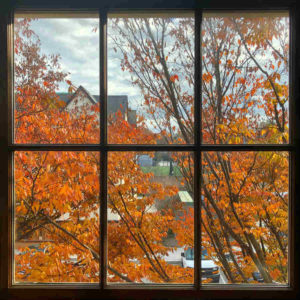 Nine years ago today we received word we would be traveling to China to meet our older son. I remember exactly where I was and what I was doing when I found out we had received our Travel Approval. I bought our tickets to China that day! I remember calling John and then my mother with the news.

We waited a long 11 months between the day we first saw our little boy’s photo and the day we boarded a plane to fly to China to meet him. I had started to give up hope that we would travel before Christmas. But we had him home just in time for Christmas that year.

We don’t really celebrate today, but I remember Nov. 23 as the date. It was the Monday before Thanksgiving that year, and John and I decided to stay home and have a quiet packing day that Thanksgiving. It was all so wonderful, just knowing our son would soon be in our arms. 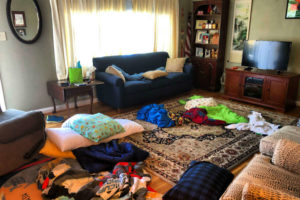 We enjoyed a great sleepover for Leo and two of his friends last weekend. I realized that I have come to relax more when the boys have friends over. It’s also nice that we know his friends so well. But I’ve also come to see that there are a few things that make it easier.

Here are my tips: 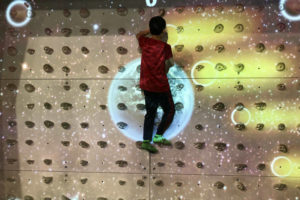 As part of the sleepover, we went to Ninjabe in Columbia, Md. I thought it might be really busy, but we made reservations for a Friday evening, and it was not crowded at all.

The boys had an amazing time climbing and swinging and sliding and doing this really cool climbing wall that was also a video game. They were climbing on a large screen, and images would pass in front of them for them to tap with their hands and feet. I’ve never seen anything like it, and I have never been equipped to participate in anything like that—not even at 11. But it was fun to watch them take it on. 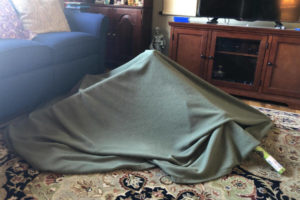 Wherever we go, the boys see things they might like to own, and I give the same answer I always give, “I’ll take a picture, and when we get home, you can add it to your wish list.” They both keep running wish lists on Amazon, which is helpful for their parents, aunts and uncles, grandparents, and also for them as they try to save up money for certain items.

Then one day, of course, you buy a few rolls of wrapping paper at the dollar store, and you watch as they become the most popular toy in the house—a tent thanks to a rubber band and a large blanket.

So if you’re looking for a gift idea for an 8-year-old boy, give him three or four rolls of wrapping paper and a rubber band.

You can find more quick takes on Kelly’s blog, This Ain’t the Lyceum. Hope you had a wonderful Thanksgiving and have a great weekend!