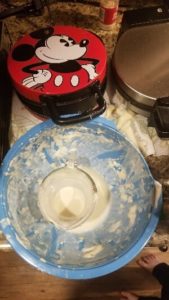 Growing up, one of my favorite stories was “The Little Red Hen.” It’s the story of a little red hen (obviously) who asks various other farm animal friends to help her with the chores that will ultimately lead to a fresh loaf of bread. In the end, the hen refuses to share the hard-earned bread with her neighborhood friends because of their lack of assistance in procuring materials for said bread.Last Friday night, I found myself in a similar situation as I prepared the our favorite family meal, “breakfast for dinner,” featuring my famous (at my house anyway) waffles from scratch.

I announced to my four children that I required assistance with this task. Collin, 9, said “no thanks,” as he was deeply engrossed in a video game. Frank, 6, hesitantly volunteered without looking up from his drawing. Leo, 6, and Teagan, 2, were by my side before I could finish my sentence.

What happened from there was nothing short of a fable that bore a resemblance to “The Little Red Hen.” The biggest difference (spoiler alert) is that unlike the Little Red Hen’s would-be friends, each of my children ended up helping in one way or another. As the waffle-making process unfolded, it led me to believe that there are four types of helpers in the world and believe it or not, they are all important.

My two youngest children wanted to help right away, but they didn’t know what the ingredients were or where to find them. Fortunately, my perpetually hungry first-grader Frank spends an inordinate amount of time in the pantry and is an excellent reader. He gathered up the supplies I would need and set them on the counter. He even knew the difference between baking soda and baking powder. When all of the ingredients were finally “mise en place” (a term that basically means “all set” in French), Frank bailed on me and returned to his artwork.

Leo watched closely as Frank carefully selected the essential elements to fluffy, crispy waffles. I could tell that he was invested in learning the ins and outs of making waffles, such as the difference between flour and sugar so that he, too, might one day be the set-up man. “How are we going to mix the dry ingredients and the wet ingredients?” he asked. Surprised by his kitchen vocabulary, I asked where he learned those words. “A YouTube video,” he said. He insisted upon measuring and dumping ingredients and remained by my side for the entire process, asking questions and obliging my every request.

I didn’t expect much from toddler Teagan. She stayed close to Leo and Me, but wasn’t much help. At one point she dumped half a shaker of garlic powder into a bowl (seperate from the waffle batter, thankfully!) and began running her fingers through it. I had to stop what I was doing to clean up after her. I politely asked her to leave, but she refused, so I had to find something else for her to do. I gave her a few opportunities to stir the batter, which still made her feel like part of the team. “Ooh! Look at that!” she shrieked with amazement as powdery clumps disappeared into a sea of milk, oil, and my secret ingredient, orange juice. We laughed at her amazement. Even though she didn’t actively contribute much, she stayed with us the entire time, offering a little dose of entertainment when we needed it.

It was very hard to pour the finished batter with tiny fingers itching to get close to the dangerously hot waffle irons. Collin could not have joined us at a better time. At 9, I could trust him to take great care to fill each crevice with batter. He remained at his station until we accumulated a dozen waffles, then helped me plate them along with the eggs and hash browns Leo had also helped me to prepare. I wasn’t expecting another pair of capable hands, but Collin’s surprise appearance was just what I needed to get the job done.

As we doused our waffles in butter, syrup, and, yes, ketchup, I appreciated each of my helpers for playing a part in making it possible for us to enjoy our delicious meal. I recognized that their roles could be found in other areas of life, as well: the starter gets things ready, the apprentice keeps things steady, the cheerleader brings the fun, and the closer gets things done!

Now, let’s take this to another level. Besides making waffles, how could this framework apply in other venues where collaboration is of utmost importance, like school, work, family, leisure activities, or faith communities? As leaders, how do we show our appreciation for any and all help we receive? What role(s) do you usually see yourself in when you are helping someone else attain a goal?

Most of all, ask yourself, “what role should I play in serving God?” The answer is simple. Show up and give everything you’ve got.