Suddenly it’s August. We’ve had such a fun and more-relaxing-than-usual summer that I would really like to hold onto this season a bit longer. And, although one of our children did his summer reading assignment for school before the end of June, I just forced myself to go dig out the assignment for his brother this morning.

We’ve been reading all summer, but we have some work to do. 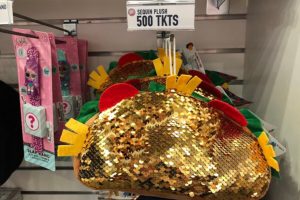 I enjoyed every minute of my birthday. I told our boys we could each pick something to do during the day. We stopped at Dave and Buster’s, where I tried—and failed—to persuade the kids to choose a sequined stuffed taco in the shop.

Then we shopped briefly in the mall, had lunch at the Olive Garden—where the greeter gave us a beeper that was number 76 (my birth year—as I told her, of course! She might have been a little confused by how excited I was about that, but my children acted as if it were completely normal for someone born way back in the 1900s to be excited about such a thing), picked up cinnamon buns at Ikea, and made a visit to an adoration chapel on the way home. 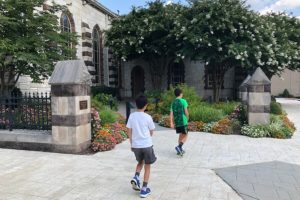 That was my first time going to adoration with children, and it was neither an unbridled success nor a complete disaster. I was astonished by the number of people in the chapel.

It was so hard to find three seats together that we had to squeeze in next to a man who was already there.

We did our best. We spent a few minutes with Jesus. The boys asked me some questions before and afterward, and I was happy for that moment of connection. We will try the whole thing over again one day. 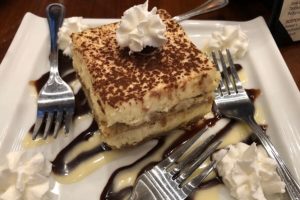 When we arrived at home, I discovered a surprise gift from a friend—a simply marvelous book of puns. Then I rented You’ve Got Mail, and my sons watched it with me and asked me questions about the ancient forms of technology represented in the film—and I answered them, counting my gray hairs as I did.

John, our boys, and I met my parents for dinner at Dimitri’s in Catonsville, Md. It’s one of our favorite spots. The tzatziki there is worth a drive around the beltway, their salmon souvlaki is moist and delectable, and the tiramisu the waiter brought vanished. One of our boys adores the fiery feta dip there, and the other dreams of the saganaki, which the waiter sets on fire at the table.

We let our sons order hot tea toward the end of the meal, and it was this enormous treat. They sugared and milked it, stirred, clinked glasses with it, and then drank it down. I might order tea at the start of the meal more often. Tea is sheer entertainment. 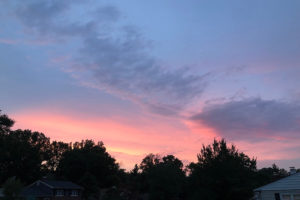 At Mass on Sunday we had a visiting priest who has been serving in Eastern Russia since 1992.

He described how his parish there had 15,000 parishioners before the communists came in and killed practically all of them. When he arrived in 1992, he and another priest there advertised to try to find parishioners, and they found just a few. That small group had never received their First Communion, and the priests were able to give it to these people, who were now in their 70s. He said as they received, the tears flowed—and from the priests’ eyes too.

The priests—by the grace of God—have rebuilt the parish in Vladivostok to about 500 parishioners, and they have just had their first priestly vocation, celebrating the first ordination in their bishop’s lifetime.

Our 9-year-old turned to me and said, “Are you crying?”

“Inside I am,” I whispered back.

This will probably sound naïve, but I hadn’t fully appreciated how horrible communism was in Russia—and how difficult it would be for a nation to rebound from that time.

If you want to read more about Fr. Daniel Maurer, CJD, and the work he was talking about, you can visit the Mary Mother of God Mission Society site. 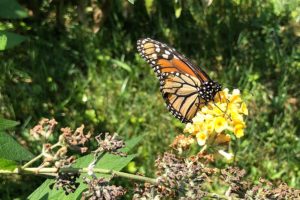 Now—perhaps because there are more butterflies around—they are stopping to visit the bush, even though the flowers look tired and dry.

There’s definitely a metaphor there for patience and everything happening in its own time.

And my crepe myrtle—or crape myrtle, since apparently there are two possible spellings—is settling in just fine. All of this is thanks to John and not at all thanks to me. We have a very Mary/Martha approach to gardening. He plants and nurtures and waters. I merely admire and run to get my phone to take a picture.

We lost power one morning this week. I heard the boom of a transformer (or something) nearby, and the house went dark. There is nothing like losing power to help you appreciate all you normally have in a typical day.

Fortunately we have a fantastic sitter who was willing to roll with it. They hit the dollar movie in Hunt Valley and ate lunch out before coming home to a cool house with restored electricity.

Good sitters are much more important than electricity. 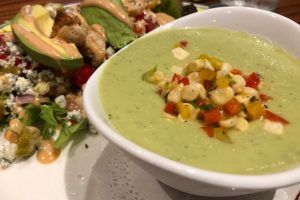 A colleague and I were going to meet for lunch one day this week, but after I arrived at the restaurant and got a table and settled in, she reached out to let me know she was caught in terrible traffic and couldn’t come.

So, I ordered lunch alone. Much as I had been so excited for our time together, eating all by myself suddenly seemed like an unexpected treat during a busy week.

My soup and salad arrived, and I took a few bites. Then I looked down and saw a bug on the salad. It was this weird little spider thing—and it’s hard to believe I didn’t photograph it. I had taken a photo before I started eating, but you can’t see the spider in it.

I told the waitress, and she was horrified. She apologized over and over. She offered to bring me another salad, and I accepted, even though I wasn’t sure I had the appetite for it.

The manager came out and apologized, too. The chef herself brought me a huge new salad and delivered it to my table. Then they refused to let me pay.

It’s a lovely restaurant, one I’ve been to several times, and I know I will be back—but especially because they worked so hard to remedy things.

Is finding a spider in your salad lucky? I don’t know. But spotting one before you eat it has to be.

Find more quick takes at Kelly’s blog, This Ain’t the Lyceum, and have a wonderful weekend.